Review: War For The Planet Of The Apes 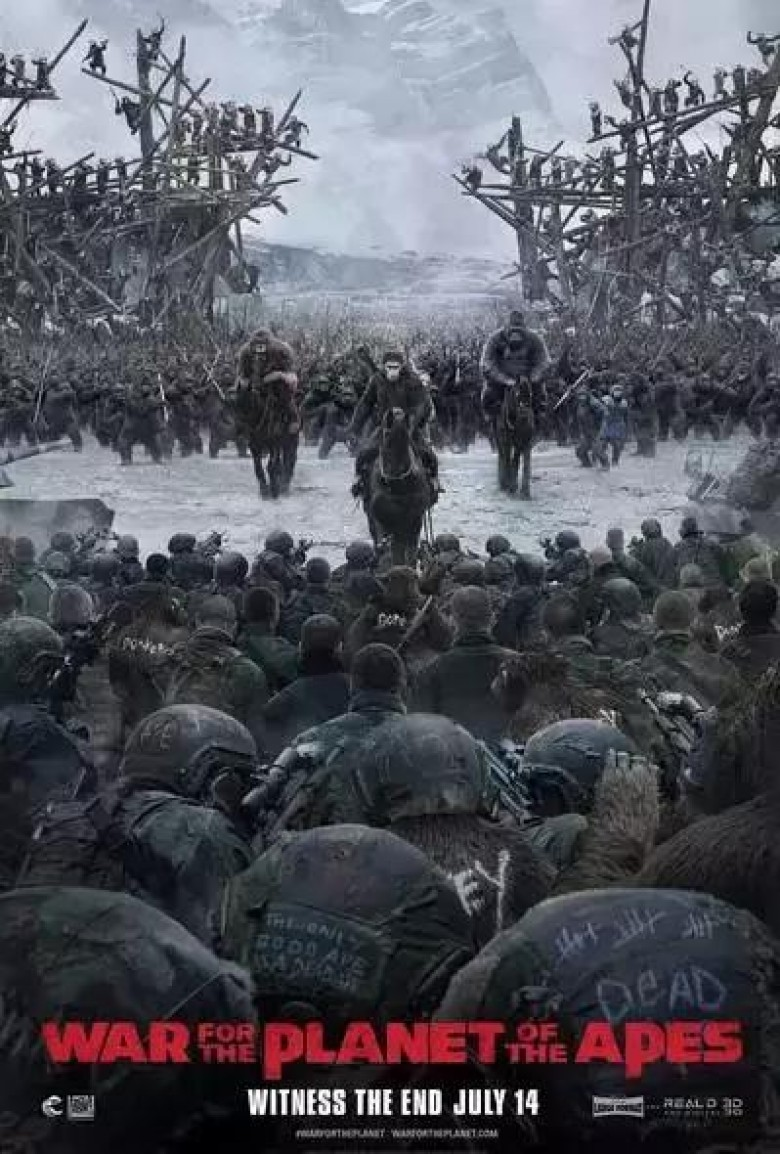 “We are the beginning and the end”

I’ve never seen the original Planet of the Apes films, but the little I know has always presented the titular apes as antagonists. You don’t cast Charlton Heston as your lead circa 1968 unless you want him to be the central figure with whom to align. He’s a man trapped in a foreign world ruled by a species that scientists long held as inferior—prototypes for his own advanced existence. How it ends is hardly a spoiler; its subversion of the entire premise causes us to question man’s inherent good and evil. It’s this revelation that the reboot series grabbed a hold of to return to the beginning. Through the rise of apes, we would see the fall of man -- something that may have already begun in reality.

This new franchise did not begin with writer Mark Bomback and director Matt Reeves, but they’re the two names we will associate with its success in the annals of big budget, large-scale effects-driven cinema. They turned an origin story into Greek tragedy, shifting what was a document of mankind’s hubris into a legend of equality, survival, and peace for apes. It becomes a mirror unto us: the trilogy showing cognitive thought breeding unbridled discovery on towards a power-hungry greed stemming from an inevitable crippling fear of losing our place at the top. Gods created man and man killed Gods for money, comfort, and pleasure. Man created apes and unwittingly forced their hand to rebel. We’ve yet to understand how any drive to manufacture our betters ensures our obsolescence.

The brilliance of the series is that it renders humanity as the virus choking the life from Earth. We’re forced to align ourselves with the “other”—the apes—because they’ve become the versions of ourselves we believe we can become again. Anyone who’s ever taken a cursory glance at the way America’s government and media is run on a for-profit scale rather than for-truth knows the pipedream for peace and harmony may officially be dead. Mankind is running itself into the ground by creating divisions where none should exist. In our yearning for more, we’ve ensured that others have less, so revolution is all but assured. It’ll be a war fought by those who simply wanted to be left alone because those in power refused to do exactly that.

So we aren’t seeing a battle between apes and men. It’s between those who’d rather burn everything to the ground rather than give an inch against those who will no longer be shamed into silence. It’s old guard versus new and it’s never been clearer than with War for the Planet of the Apes and its naked glimpse at the horror of men. The political and racial undertones are ratcheted up to eleven here with what may be the last contingent of humanity refusing to converse with their enemy even when that enemy says it doesn’t want to fight. Trust is a liability in the face of paranoia. We could deal with stronger animals because we had the intellect. Give them that and we lose the upper hand.

“Harmony” is therefore proven to be as far from equality as possible. Those in power allow “harmony” because they believe they can squash dissent. True equality means each distinct group within has the potential of being those who squash and those who get squashed. So when the dynamic of control shifts towards the apes, the humans have no recourse other than absolute hellfire. This war is one of survival on both sides—one to exist and the other to retain control. This is the perfect metaphorical representation of movements like Black Lives Matter. The audience is forced to understand oppression. We are forced to see that while the apes are being aggressively pushed against their wall, the humans have constructed the one at their backs on their own.

But it goes beyond that because life is too complex for black versus white. Ape leader Caesar (Andy Serkis) was thrust into his role. Humans opened his eyes wide with cognitive function and narrowed them with a sense of self as “other.” He was pushed into showing strength when humans threatened his life and again when his ape brothers who never knew human compassion found a taste for vengeance. Caesar is therefore like us all—innocent and idealistic until given a reason to be driven by rage (which he is here). It only takes an instant for emotion to usurp reason, one instant for motivations to shift from greater good to selfish pleasure. Caesar believed love could change Koba (Toby Kebbell) and forgot hate could do the same to him.

And that’s why Reeves and Bomback introduce new characters to supply Caesar with as much reason to lose himself as to recover hope. They supply a face of evil beyond the conceptual abstracts driven by uncertainty Rise and Dawn wielded. Woody Harrelson‘s Colonel is a man on a mission. His attention may be divided, but the destruction of the apes is the “human imperative” propelling his actions. He understands man created them and as such knows that man must also be the one to get rid of them. He isn’t fighting for himself anymore. His goals have shifted (warped) into positioning himself as the savior of humanity. He therefore operates without remorse or contrition. His Colonel has lost perspective. It’s “us or them” and he’s prepared to die.

On the other end of the spectrum, however, are fresh examples of a promising future. There’s a young orphan girl found on the fringes (Amiah Miller‘s Nova) unwanted by ape and man alike, as well as the pitiable “Bad Ape” (Steve Zahn) who found himself blessed by intelligence without a Caesar to guide him. They represent the innocence both sides believe they’re protecting, and yet only one army will shelter them. They’re the true outsiders who must choose a side, not by familiarity or genetic disposition, but by trust. At the end of the day, war should never be about winning because everyone loses. Victory isn’t killing the enemy to survive; it’s being willing to die at your enemy’s hands so the person next to you can live.

This is the message behind the gorgeous visual effects that have all but erased the uncanny valley where these apes are concerned. (Can we give Serkis an Oscar nomination yet?) It’s the resonate theme behind the explosive action and bleak atmosphere. As an end-cap to the trilogy, War exposes the reality that Caesar isn’t a hero because he wasn’t corrupted like those who refused to accept him at his word. He’s a hero because he always found his way back from the abyss that consumes us all. He’s a leader willing to fight a war he’s been desperate to end for two years since the events in Dawn. He doesn’t fight because he thinks he must kill in order to live (like the Colonel). He fights because he’s being killed.

The result isn’t quite as effective as Dawn was before it, but War delivers the emotional heft to bring the trilogy full circle. This series was always about a transition of power, whether by force or by fate. The dinosaurs didn’t ask to be destroyed sothat  man could reign. Conversely, apes didn’t ask for the power necessary to succeed them. We’ve watched greed, fear, and now rage turn humanity against itself as much as its creation. When we reach the point where we’re willing to murder our own in the belief that doing so will save us, we’re already lost. You could say we’ve reached that very point in our history (again) and as such should watch these films, not as the death of mankind, but as the potential for rebirth.

Our world needs a Caesar now more than ever. Maybe it will be you.