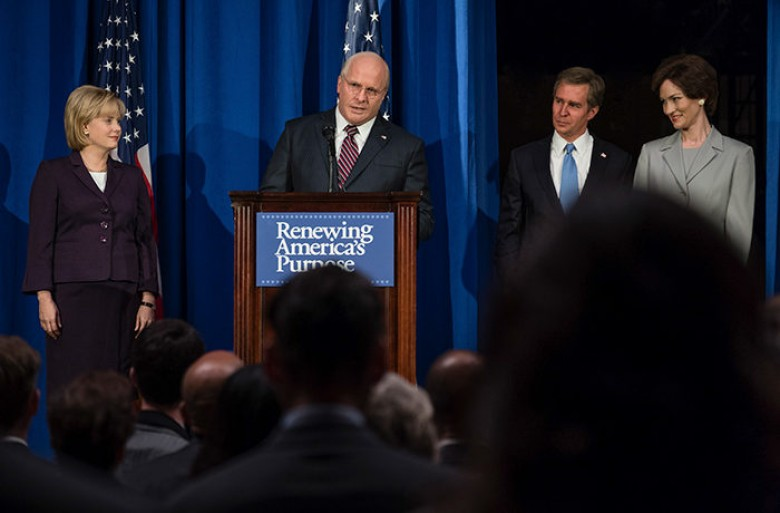 “What do we believe?”

It’s still weird thinking the guy who joked around with Will Ferrell for years is an Oscar winner, but that’s exactly what Adam McKay is. Weirder still is my being firmly in the camp that believes it was deserved. What he did with The Big Short was the equivalent of too-smart people giving the public a “layman’s terms” explanation to their questions. He dumbed-down a complex topic, made it wildly entertaining, and taught us something about ourselves both in how we reacted (or didn’t react) to what characters did and whether or not our beliefs were altered by the information learned. And it was okay to take a humorous tone because of the absurd farce it all was. Through good guys and bad, the facts were laid bare.

The rise and retirement of Dick Cheney, however, isn’t as conducive to the formula as you may want it to be on the surface. Why? Because whether or not the actions of the George W. Bush administration seem farcical due to its everyman bumpkin, cutthroat snake, and cast of eclectic characters surrounding them, it resulted in many horrible things. That’s not to diminish the horrible things that resulted from the housing crisis and stock market pilfering. I don’t want to compare casualties along racial, ethnic, and economic lines because the simple fact that both ruined human beings’ lives is what mattered. But while a film about the mortgage crisis has sinners, saints, and victims, the conservative movement towards xenophobia only has sinners and victims. That’s an important distinction.

What we get is a portrait of a man people on both sides of the aisle call ruthless. And through him comes a truncated history of how power in the United States shifted away from the people and towards the rulers they were sold. That turns the finished product into a divisive one regardless of genre or truth. McKay knows this too as evidenced by a mid-credits sequence wherein Redneck #1 calls Social Justice Warrior #1 a “libtard.” The filmmaker understands that his movie isn’t going to change anything because those against its facts will believe them to be lies and increase their revulsion of anyone with proof that they’re facts. And those who already see Cheney as a monster will simply have more reason to do so.

What then does giving it a comedic slant accomplish? Who does it make more palatable: the broad topic a la The Big Short or the specific subject? I’d argue the latter because it gives Cheney’s acolytes fuel to disregard everything as a hit-piece. It lets them reinforce their hatred of their rivals by showcasing how liberals “must resort to character assassination because they have nothing real to say.” And it emboldens Cheney’s detractors into thinking that revelations about his insidiousness told with a smirk might somehow open eyes and spark change. Unfortunately, though, Cheney was merely the embodiment of and wielder of everything the Republican Party and wealthy benefactors sowed. The damage goes farther than exposing a monster’s actions when half the country applauded those very same actions.

That leaves Vice in the precarious situation of being a well-made film whose entertainment value proves counterproductive to its well-researched message. This style of storytelling McKay has latched onto is effective in getting a ton of information out in ways that stick because we feel as though we’re having fun. But is it fun to learn that Cheney (Christian Bale) coerced Dubya (Sam Rockwell) into putting Colin Powell (Tyler Perry) on an international stage to spew unsubstantiated intelligence that ultimately led to the rise of ISIS? Is it fun to learn that Cheney may have masterminded an entire movement towards solidifying executive power to the point of autocratic ambitions as a means of self-preservation rather than national security? No. It’s not. The joke is therefore on us.

And that kind of is the point. That’s the mic-drop, cut-to-black moment of clarity we receive after the aforementioned mid-credits scene. I’m not sure, however, if it will actually come across that way due to everything that came before. Rather than be a “we’re to blame” mirror turn, it can very easily come off as an apathetic declaration that we’ve already lost. Watching the systematic dissolution of everything that allowed us to hold our elected officials accountable while those orchestrating it laughed their way to the bank on the backs of hard-working Americans they duped into thinking they would be the ultimate benefactors is less eye-opening than eye-closing. By embracing McKay’s acerbic tone we’re acknowledging how painful things are. We’re latching onto the escapism he provides.

So we find ourselves moving further away from the players too—each one becoming a punch line when they should be seen as villains. By letting McKay say it’s republicans’ fault for being duped and democrats’ fault for doing nothing to stop it, we’ve shifted the blame rather than expanded it. Yes we should see ourselves in the mirror, but not at the expense of what these men and women did with the unfettered power we gave them. We shouldn’t be thinking, “Oh, but Cheney stopped short of throwing his gay daughter under the bus initially and then felt really bad about throwing her under it later.” No, we should be wondering what kind of person would see his daughter as merely a pawn in the first place.

That’s why it pains me to admit how effective Vice is at its craft. It’s misguided and potentially dangerous insofar as how it seeks to manipulate its audience and how it unwittingly manipulates it too, but I did have fun despite the horrors. I loved the revisionist history credits scroll halfway through of what could have been if Dubya never called looking for a VP. I smiled at the Shakespearean soliloquy, praised the wit of Alfred Molina‘s torture-selling waiter, and smirked seeing Naomi Watts as a fourth-wall breaking TV journalist (especially considering she played Valerie Plame in Fair Game, a woman whose name of course comes up here). And the use of Jesse Plemons as an “unknown” omniscient narrator acting out those citizens Cheney’s policies hurt? Structural perfection.

Bale is superb in the lead role and Amy Adams proves even more ruthless as Cheney’s wife Lynne (the scene of her going full alt-right during a campaign trail speech is devastatingly raw and damning). Rockwell has a good time, Steve Carell as Donald Rumsfeld delivers more intrigue than anticipated because of how closely aligned to Cheney his trajectory proves, and it’s great seeing all the other familiar faces that pop up here or there throughout. But while they all work their butts off to make this thing a successful document of entertainment journalism, it being that (the main cause of our politicization at the hands of editorializing for ratings) can’t stop making me feel unclean having enjoyed the ride. Vice isn’t scathing enough to offset its inherent humanizing geniality.