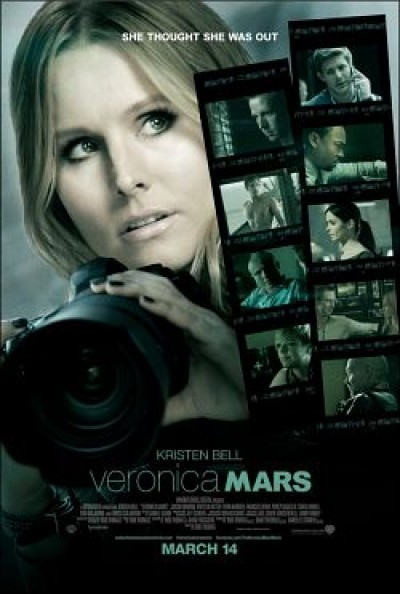 Are you Team Piz? Team Logan? Do you have any clue what I’m talking about? Well, if it’s the latter I’m prescribing you rent all three seasons of“Veronica Mars” on DVD now. I didn’t want anything to do with little Kristen Bell and her super sleuthing either back in the day, but I jumped on the bandwagon when she, creator Rob Thomas, and alum went on Kickstarter and asked for help to craft a feature film. The event was as groundbreaking as the media frenzy surrounding it proclaimed: 91,585 pledgers, $5,702,153 raised, and a fully transparent behind-the-scenes dispersal of information spanning Day One to opening night. Knowing the show now and obviously having watched the trailer, however, I can’t pretend those first two questions above weren’t this movie’s goal from the start. And that’s okay.

Why? Because it’s what fans want to see and it’s the logical entry point for novices to dive in. Let’s face it, this thing already made a bunch of money from those people who would have been in line opening night. The “Marshmallow” fandom is fierce and they’ll give it more money if they live in a city whose AMC is screening it—my girlfriend and I were prepared to had Buffalo made the list—but true success lies beyond the built-in core. You need fresh eyes to join the party and prolong this crazy whirlwind of a year and there is no better way to expose a new generation of potential die-hards than a sexy love triangle between its star, her nice guy boyfriend, and the heartthrob of a brooding leading man she cannot shake.

The story surrounding them onscreen wasn’t Rob Thomas’ first idea for bringing Veronica Mars back from the dead. That one is what he and co-writer Diane Ruggiero scribed as the first in a series of in-canon novels instead. Thomas knew finding a reason to get the gang back together took precedent above hatching a caper for his diminutive private eye to let loose upon. So, in came Neptune High’s ten-year reunion, a dark new chapter to Logan Echolls’ (Jason Dohring) cycle of self-destruction, and the push and pull between everything Veronica (Bell) hated enough about home to leave and loved to the point of addiction for her to return. Once more the only person in Logan’s corner and therefore the only one capable of exonerating him, her return after a decade won’t be without a few cracked eggs.

Opening on a narrated montage of a prologue to familiarize newbies, we discover Veronica has exited her fast-track journey to the FBI (a planned plot-line to the never realized fourth season) in lieu of New York City high-life with Stosh ‘Piz’ Piznarski (Chris Lowell) at her side and a laundry list of law firms awaiting her infectious smile and tenacious attitude to grace their offices. This is the life father Keith (Enrico Colantoni) prayed he’d provided her despite their colorful past working private investigation cases while she was still in school and he an unjustly disgraced former sheriff. Yet it just took a phone call from Logan to risk shattering everything with his trademarked, “Veronica, I need your help.” Facing airtight murder charges without a friend in sight, picking up the phone was his last option and she couldn’t resist.

In perfect accord with its television show origins, the case sprawls out into a much larger web of deceit involving a menagerie of familiar faces and newcomers from Neptune. It’s fodder for jokes and callbacks with Francis Capra‘s Weevil, Ryan Hansen‘s Dick, Krysten Ritter‘s Gia, and Amanda Noret‘s Madison. A way to work her law enforcement connections so Leo (Max Greenfield), Vinnie Van Lowe (Ken Marino), Deputy Sacks (Brandon Hillock), and Cliff (Daran Norris) can be brought into the fold while also paying homage to the late and inept Sheriff Lamb by giving the job to his older and just as smarmy brother Dan (Jerry O’Connell). It does kind of play like an extended episode as a result, but don’t blindly fall prey to such ill-conceived preconceptions. Production value increases have brought this world into the next level.

I don’t even mean the three star-powered and hilarious cameos or its PG-13 rating’s requisite f-bomb.Veronica Mars is a cinematic treat that enhances its humble beginnings through polish and poise. The material has always been dark, (arcs concerning rape, murdered teens, and rampant pedophilia), so Thomas definitely didn’t have to raise the stakes. No, it was more about putting the close to six million fan-raised dollars to good use on locations, wardrobe, and effects. It was about infusing new technology, working in old tech like lo-fi bugging devices for nostalgia’s sake, and evolving the characters we cared for into the next stage of their lives (Percy Daggs III‘s Wallace and Tina Majorino‘s Mac). But the biggest coup was actually finding a way to revamp Logan’s reputation and prevent us from rolling our eyes upon his plea of innocence.

We know he didn’t do what they say he did, rallying behind Veronica’s detective work uncovering the truth. Bell’s reprisal is spot-on from the snark, smarts, and cutthroat attitude when it comes to self-centered desires and an ill-fated want to live in two worlds with both men she loves. You cannot deny her joy when around Lowell’s extremely likeable Piz nor her sensuality when opposite Dohring’s overwrought but appropriate “smoldering”. Her actions and choices will mean more to those who’ve followed her journey yet also mean enough in context with the story alone. She jumps to conclusions as always before steering the ship true, a few casualties effectively occur along the way, and dare I say seeds of more crowd-sourced adventures are laid for the future? Veronica Mars is better than ever and perhaps not leaving anytime soon.

PS.: Enjoy the fun mid-credits bit, but stay for the fan-service gem of a verbal Easter Egg towards the end of the scroll courtesy of Logan’s voicemail.