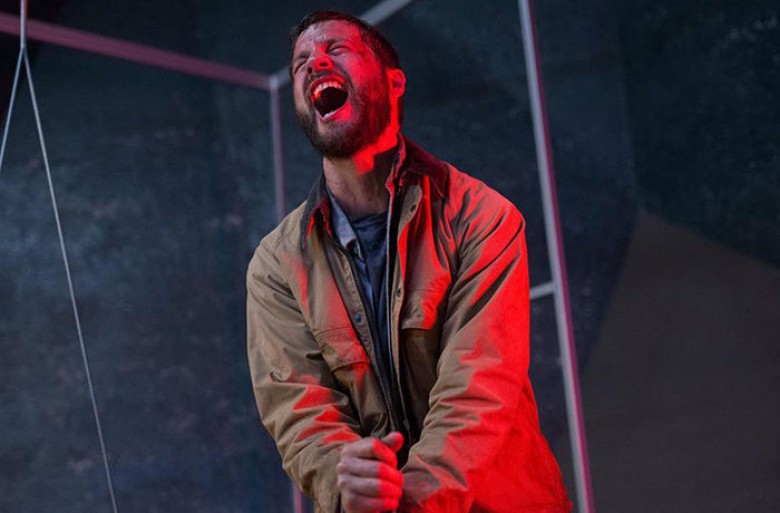 Grey Trace (Logan Marshall-Green) was having a good day. An old school mechanic living in a high-tech world, his latest commission is roaring like a lion and ready to be handed off to its owner. Knowing his wife (Melanie Vallejo‘s Asha) would be interested to meet his benefactor being that she runs a robotics firm and he (Harrison Gilbertson‘s Eron Keen) practically is her main (and objectively better) competition, Grey takes her along in the muscle car with their automated vehicle in tow to return them home. A systems failure during the latter drive flips them in mid-air, the resulting crash landing placing them in the low-income neighborhood where Grey grew up. But before the paramedics can arrive, a group of unknown assailants shoots them dead without provocation.

Lo and behold a miracle. Grey survives, a severed spinal cord leaving him a quadriplegic. The day may not have ended anywhere near as well as it began, but perhaps some luck prevailed nonetheless. Even more, the latest technology Eron completed has the capability of giving Grey control of his limbs again. A tiny “widget” (as the layman likes to jokingly call the device), “Stem” reconnects his brain to the rest of his body and as an added bonus interacts with him as an AI (voiced by Simon Maiden). With lo-fi Detective Cortez (Betty Gabriel) coming up empty on her leads, Grey decides to lean into his newly enhanced physique in order to avenge his wife’s murder. And when a situation proves too tough, he lets “Stem” takeover.

This is the premise behind Leigh Whannell‘s sci-fi, body horror, actioner Upgrade. It’s a genre-hybrid with lofty ideas and a simple plot: kill the men responsible for ruining Grey’s life. Being that he’s just a mechanic—there’s no hidden past with Special Forces training—”Stem” becomes a sort of alternate personality. With its host’s permission the AI gains full control of all motor functions, relegating Grey to a submissive viewer like us. This reality leads to some wild scenes with hilarious physical comedy born from the juxtaposition of elite fisticuffs and an equally surprised, disgusted, and helpless face. Give Marshall-Green credit because he must separate facial expression from bodily movement, his straight-backed robotic hitch a thing of beauty as he wreaks havoc while begging victims to back down.

It may sound familiar if you’ve seen Hardcore Henry and it had the potential of reaching that underrated gem’s heights if only Whannell embraced the inherent silliness of his scenario. Whereas Ilya Naishuller‘s film played up the laughs with an unforgettable supporting role from Sharlto Copley, Upgrade more or less wants to be taken seriously. Marshall-Green is having fun and giving a clinic in plasticity and pratfall, but everything surrounding him is as severe as a bullet to Grey’s fridged wife’s chest. The sci-fi tropes of an enhanced cyborg race and the body horror effects of arm guns and CPU eyeballs are to be taken as seriously as the ramifications of the visible conspiracy that’s gradually uncovered. Rather than sanction it, the film’s over-arching tone chastises our laughter.

And that’s the worst thing that could happen. It takes the wind from its sails and forces us to look upon its legitimately cool ideas with derision. We find ourselves mocking its self-seriousness instead of enjoying every wild development as an over-the-top construction of pure entertainment. Where “Stem’s” first time out is delightfully subversive with brilliant comic timing between Marshall-Green’s ragdoll and Maiden’s purely aural straight man devoid of nuance, Grey almost instantly finds that his stomach is much stronger than previously thought. The electricity that comes from having a guy who can’t bear the sight of blood helplessly dismantle every human being in his path disappears as soon as his goals and tolerance level match that of the AI. Active participation inevitably renders the incongruous dynamic moot.

Any chance for surprise is thrown out the window because the risk of separating Grey from “Stem” drops to zero. Morality disappears, humanity evaporates, and drama falls away with them. Suddenly Fisk (Benedict Hardie) and his fellow enhanced criminals are targets to be destroyed rather than legitimate threats to battle. We never believe that “Stem” can be defeated because the one man able to do so (Grey) doesn’t want to lose it. While this result could be accepted on a purely physical level (without “Stem” he will never walk again), accepting it on an emotional one destroys necessary conflict. I think Whannell knows it too because he takes another card from his sleeve to put us off-balance with a wonderfully bleak finale, but that revelation only exposes how unengaging the rest became.

It’s too bad because the look of the whole is impressive. Whannell shoots the fight scenes with static cameras bending along with “Stem” for unnatural vantage points of his impossibly mechanical movements. The gun barrel-embedded forearms are something straight out of a David Cronenberg film and the hyperkinetic choreography of fists and blocks can be awe-inspiring to watch. Even the decision to speak the opening credits without text (production companies and title) proves an ingenious detail that enhances the futuristic setting’s authenticity. We feel as though we’re in this world—that it is real and tactile. The deaths are gruesome and punishing, the attitudes formed from futility and rebirth. I only wish there was more to offer than consequence-free action within. Some additional performative cheese would have sufficed.