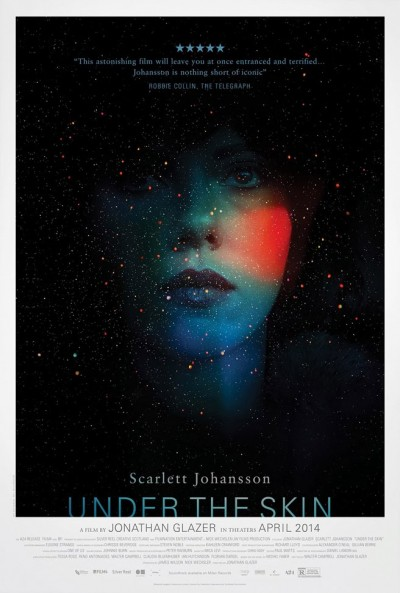 “Do you want to touch my neck?”

Some movies require you to take a pause so they may settle into your consciousness and I don’t think it’s a coincidence that those are generally the good ones. It could be because the story is abstract or opaque and needs deciphering. Or perhaps it took an unexpected twist from initial preconceptions or mid-viewing hypotheses and you must now reconcile its reality with failed assumptions. Jonathan Glazer‘s Under the Skin, however, surprised me due to something I did expect: its silent, coldly clinical aesthetic introduced right from the start. While this is standard practice for most memorable sci-fi, there was something else at play I still can’t completely shake. Glazer has crafted one of the most discomforting films I have seen in a very long time and this fact alone also makes it one of the best.

The director and cowriter Walter Campbell‘s adaptation of Michel Faber‘s debut novel has multiple scenes that quite simply make you squirm in your seats. It’s not because of blood or gore—Glazer doesn’t need to settle for cheap tricks when he can create an uncomfortable mood with visuals, performances, and score alone. He confuses, disorients, and awes us simultaneously by shifting our environments with a pitch-black palette and Mica Levi‘s unsettling musical cues. Are we watching a sexual predator’s thoughts manifested into action? Is what we see some warped fantasy depicting mankind’s inability to suppress its libido when the prospect of flesh is served on a platter? Or is the vixen at its center truly transporting her prey to a physics-bending space devoid of discernable edges or permanent physical states? And if so, why?

I’m guessing there are very few people buying tickets that know absolutely nothing about what the story holds. I might even wager a majority of audience members arrived in some part because they heard Scarlett Johansson‘s nameless drifter is shown in the buff for a good portion of its runtime. My point: most understand she’s an alien before the lights dim and as a result might find themselves even more confused than if they hadn’t. I certainly was because I kept waiting to see her aircraft or maybe a sequence in space with her comrades describing their mission on Earth. Hell, I hoped I’d get some type of mainstream Hollywood trope to explain something because I was barely treading water until a thematic flip halfway through allowed some answers to materialize in the recesses of my mind.

Before that point, Under the Skin is very much a calculated commentary on routine lulling us to sleep until we enter Johansson’s darkened door alongside a new, unsuspecting sexual partner. The quiet only altered by the sounds of automobiles and casual conversation on the street turns to absolute silence save for the score’s now powerfully engaging notes. That door she leads her victims into becomes the mouth of an abstract hell grabbing at our pleasure centers and taking us to the brink of carnal desire as oblivion consumes us whole an instant before we realize our fate. We get sucked into the pattern she herself has become a slave to—the trolling for loner men all too hungry for physical connection interrupted by girlfriends or bros until her lure catches a meal. In they go, rinse, and repeat.

This is the idea her kind has of humanity. We’re bags of meat led around by our sexuality towards the next willing participant in a perpetual cycle of desire. She fulfills her job because she knows men will follow her, stripping off their clothes faster than she can reach her underwear. They crave her, beauty blinding them from obvious danger because what woman is getting into a strange guy’s van and subsequently his lair only shown as a black abyss from the front stoop? We are predictable to her and her motorcycle-riding handler—tiny ants doing our queen’s biding without question. Selfish, lustful cretins so caught up in personal satisfaction that we’d ignore a drowning couple at the beach as long as a vision such as her was there to steal our attention.

Or would we? It’s one of the toughest scenes to watch and a turning point in decoding the whole. Here’s this man from the Czech Republic unencumbered by anything in their current Scottish setting and he leaves her to jump into the water and selflessly sacrifice himself for strangers. It’s an aberration for which she couldn’t have prepared and the first step onto a path that culminates in compassion and empathy for a young, disfigured mark (Adam Pearson). She becomes sweet and attentive, eventually giving the one man who doesn’t simply follow her to his death a glimpse at the body she’s only teased previously. The repetition and sterile presentation of everything before receives clarity—its detachment not a byproduct of poor pacing but an intentional stylistic choice mirroring this foreign thing’s robotic machinations along mankind’s less than predictable terrain.

Glazer seizes this opportunity to turn the tables, this deformed figure’s warm appreciation above lascivious lust piquing Johansson’s fascination with her human form (one whose possibilities she’s ignorant towards) before questioning her mission. She becomes the follower as assumptions are reversed with creepers turning out to be kind and trusted guides monsters. Routine’s set aside for curiosity and she finds the joy of what her species couldn’t fathom as well as the horrors they could once escaping the controlled environment her prowling utilized before reaching her epiphany. We watch as the sights and sounds of Earth flow through her with visual landscapes morphing into her face and body as though her extraterrestrial origins are overtaken by our world’s promise. Prey becomes predator, predator prey, and an outsider’s decision to give us the benefit of the doubt proves to be her demise.

As such, Under the Skin shows humanity at its finest and worst, earning a second chance and squandering it as fast. We see beauty in destruction (Johansson’s stunning portrayal, body and soul) as well as grotesquery in life (Pearson’s tumor-riddled face cementing his fate as pariah) while gorgeous visuals of man suspended in liquid are subverted into a balloon pop of plasticity. The film exposes humanity’s shortcomings and its capacity for good from the viewpoint of a being unversed in our complexities. What are her motivations, how dissimilar are they to us, and what’s their ambiguous mission’s purpose? The brilliance of what Glazer, Johansson, et al have done is that we don’t need to know. We’re all sinners and saints—living up to expectation and breaking free when it suits us. And we’ll burn you as quickly as love you if given the chance.