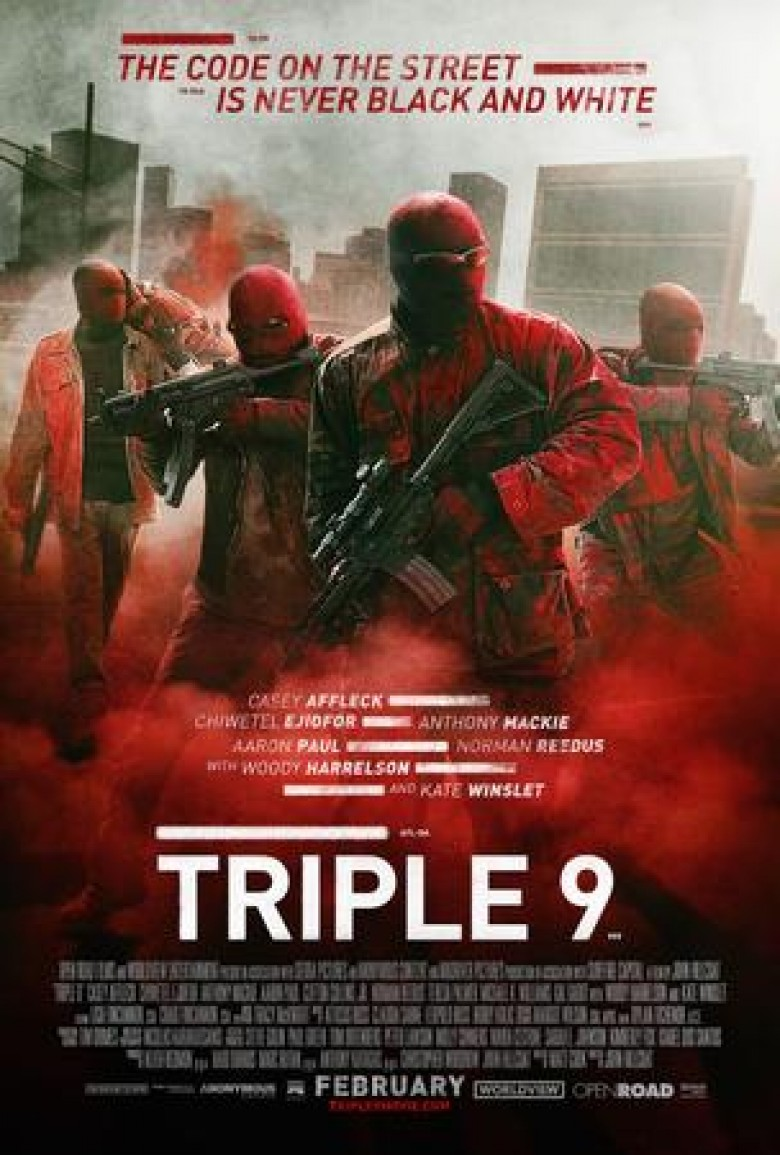 “Better him than me”

No matter how exciting it is to see a film with the cast John Hillcoat assembled onTriple 9, the old adage “less is more” still stands. The issue with having so many “main characters” is that they all end up becoming periphery players. And if one does rise above the rest, you wonder why so much happens that doesn’t concern him/her. This is where Matt Cook‘s 2010 Blacklist script falls into trouble: Casey Affleck‘s Chris Allen is our lead and yet he’s basically a pawn to the plot. He’s the only sympathetic character who never compromises his morals to coerce that sympathy. He’s the one person who’s fate we truly care about. But this isn’t his story. The film instead revolves around cold-blooded killer Michael Atwood.

“But his son,” you say. “He’s doing this because he’s a good father,” you lament. No. Michael Atwood is a cold-blooded killer—plain and simple. The reason we may feel tiny pangs at specific moments is completely due to Chiwetel Ejiofor‘s talent at portraying complexity where there isn’t much on the page. Does his Atwood get a raw deal from Israeli-Russian matriarch Irina Vlaslov (a scene-chewing Kate Winslet loving every minute of her nonplussed villainous attitude)? Sure. But he isn’t innocent. He’s a professional who traveled in the same circles as international gangsters, got in bed with them courtesy of familial blood ties, and would kill anyone if it meant freedom for himself and his boy. We’re interested if he succeeds, but we don’t care if he dies.

This wouldn’t be bad if Affleck’s Allen didn’t exist to prove Michael really is nothing but a criminal. Here’s a veteran returned home to work as an Atlanta cop inside the same precinct as his weathered and erratic uncle Jeff (Woody Harrelson) while supporting his loving wife (Teresa Palmer) and son. He takes the harsh ribbing of his co-workers dismissing him as soft because he came from a soft district—never asking what he saw abroad since the streets are their warzone and they can’t compare the two. So if Chris knows how to survive by being smart, cautious, and ruthless when it comes to projecting his strength as a lawman, the rest know what it is to work the system sullying their badges for lucrative scores.

Enter corrupt cops Marcus Belmont (Anthony Mackie) and Franco Rodriguez (Clifton Collins, Jr.), associates of disgraced officer Gabe Welch (Aaron Paul) who’s in turn brothers with Atwood’s right-hand man Russell (Norman Reedus). Hence why Michael’s at the center. He’s the man tasked with Irina’s mission. He’s the man who recruited the Welch boys and they the cops. He’s the one Jeff chases after a prison heist ends a hair south of flawless. Everything occurs as a result of his actions and Chris simply gets caught in the crossfire when his captain partners him with Marcus. Chris is merely one piece on the board able to move at the screenwriter’s whim. And Cook quickly makes him both unwittingly crucial to Michael’s plans and central to cracking his uncle’s case.

So here we have two men: Chris and Michael. Complete opposites of the same coin, fathers striving to protect their children by embracing two sides of the law. In any other film of this kind they would eventually go head-to-head as good versus bad. Justice will be served and life will continue on as it always had with one or two less people in the game. But not Triple 9. These men never even meet. Point of fact, Chris doesn’t even know Atwood exists until the very end. They are literally paralleling each other and as a result separating our attention. We care about one’s life and the other’s deeds. We know they’re about to collide in anything but a coincidence and yet that’s exactly how it feels.

It doesn’t help that Harrelson’s Jeff constantly talks about these coincidences like a crackpot screaming, “Intuition!” This makes the convenience of everything more glaring and what happens more obvious. As soon as someone is marked for death or injury we know what’s actually going to happen. As soon as someone in desperate need of a moral quandary proclaims he’s ready, we know something will occur to give him pause. But it’s meaningless because these monsters cannot earn redemption. To give it would render the entire endeavor moot because hubris cannot be rewarded. Good on Cook for keeping things harshly violent and authentically drawn if unsurprisingly derivative, but there’s also the potential to have given more. The same disappointment I had with David Ayer‘s Street Kings applies.

It’s gritty with phenomenal acting and taut suspense, but it’s little more than a high production value police procedural. The final freeze frame before the credits cements this realization in its weirdly 80s-vibe of metaphorical high-five despite blood everywhere and heroes in peril. It’s a shame because Ejiofor, Mackie, and Affleck bring it from the very beginning. Collins, Jr. and Paul deliver quality emotion by showing none and the full spectrum respectively. And Winslet is a delightful Bond villain filled to the brim with scary psychopathy that just possesses the slightest bit of cheese. Talent is everywhere, details meticulously set, and the action succeeds in its realistic ratio of 100 bullet holes to only 3 hits. While I enjoyed its wild ride, I ultimately realized nothing actually happened.