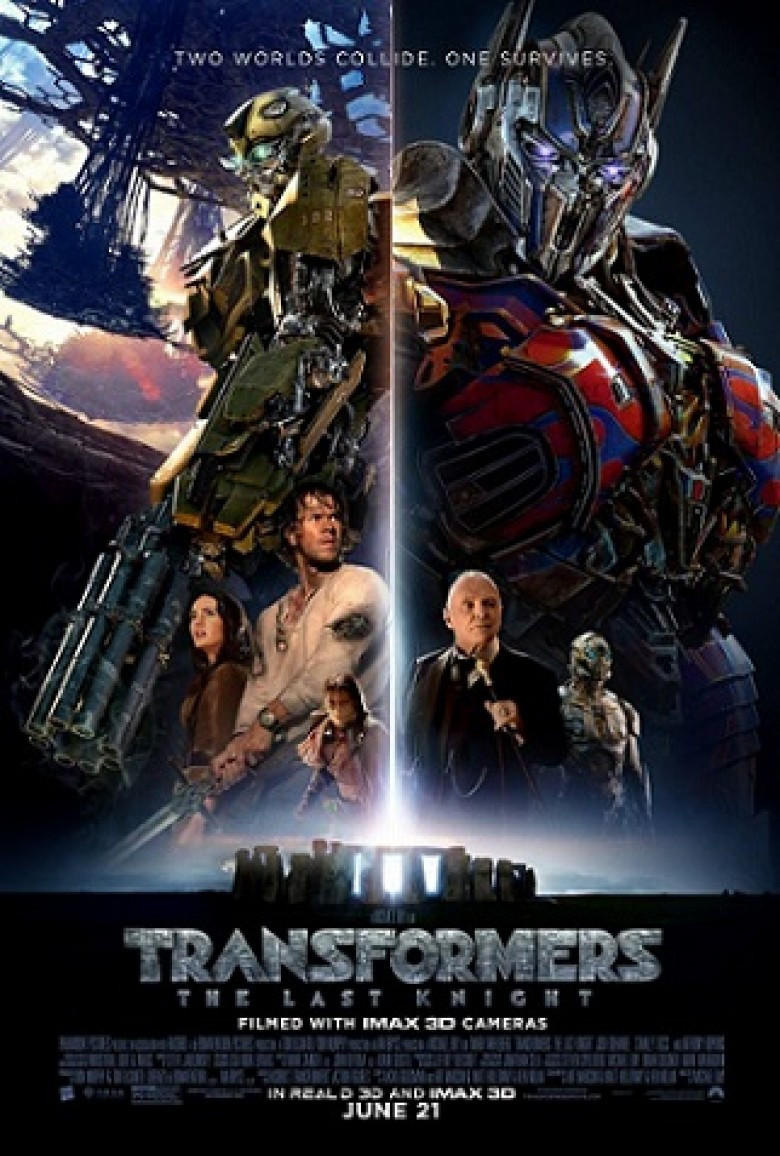 “You’re running out of tomorrows”

Fact: Transformers: The Last Knight is its franchise’s most entertaining entry. While I definitely felt ready to nod off during my original trilogy refresher course this week—and actually shut my eyes a couple times during Age of Extinction—this latest installment had me wide-eyed and interested throughout its 149-minutes (the series’ shortest runtime since its 144-minute original). Sometimes that interest was in the insane retrofitted King Arthur plotline padded by manageable excess, but mostly it was attuned to an unhinged and manic Anthony Hopkins having a blast as he collected his Hollywood paycheck. The action was exciting kinetically and aesthetically, the Autobots equal heroes imperative was flipped on its head, and Michael Bay‘s latest annihilation porn somehow felt fresh in comparison to its four predecessors.

This last point is the big one because you can only threaten to destroy Earth so many times before the redundancy proves too much to bear. And with two films utilizing varying degrees of behind the scenes chaos able to be swept under the rug alongside two more that let their apocalyptic stakes evolve/devolve humanity’s relationship with their alien allies (and foes), Bay and company were in desperate need for something else. So its unsurprising to see Ehren Kruger‘s absence this go-round, the studio choosing to put the reins in Akiva Goldsman‘s hands instead as a quasi-“universe czar”. From there the script was handed to Art Marcum, Matt Holloway, and Ken Nolan—their task to ostensibly make Cade Yeager (Mark Wahlberg) relevant in a new wasteland frontier.

It’s still annoying to watch the filmmakers reform the Transformers’ origin story yet again (first they arrived once their planet was destroyed, then it was decided they crash landed on the moon decades earlier, and now their arrival apparently dates back to the Middle Ages). This is what happens when you take a gamble on bringing a toy to the cinematic arena only to find success beyond your wildest imagination. Suddenly you’re thrust into a “strike while the iron is hot” situation and find yourself scrambling to make something up that’s tangible enough to warrant hundreds of millions of dollars. So you look at history and pilfer key moments to sprinkle in aliens. First it was the moon landing and now it’s the legend of the roundtable knights.

Just go with it. You’ve already bought a ticket and sat down, so don’t tell me you were unsure about what to expect. Let it be that Merlin (Stanley Tucci) was a drunken charlatan who duped Arthur yet hoped to still make good on his promise in the midst of war to enlist the assistance of twelve refugee Cybertronian Knights so Britain could prevail. Let there be a Staff with even more power than the AllSpark, Matrix, Pillars, and Seeds somehow trapped on Earth for longer than those others, a legend for which the Transformers must question legitimacy. Let Optimus Prime (Peter Cullen) find a destroyed beyond repair Cybertron (despite it being intact to travel through Dark of the Moon‘s space bridge) and his creator Quintessa (Gemma Chan).

Let all this happen because you have no choice. Just know that while the shift to dark drama with Age of Extinction became tedious due to convoluted plot jumps that began and ended separate from the next, The Last Knight feels from start to finish like one cohesive whole. We may reunite with Cade and get introduced to Dr. Vivian Wemblay (Laura Haddock) separately, but their convergence is swift, natural (thanks to their eccentric stalker in Hopkins’ Sir Edmund Burton), and permanent. We don’t follow one to do this, the other to do that, and someone completely different for something else entirely. There is one mission of adversity with fluid allegiances that progresses forward in a straight line. And each fight has relevant purpose beyond Hollywood expectation.

Yaeger is a fugitive—we don’t have to resituate ourselves with his life like Sam Witwicky three straight films. We know what he fights for and why. And with Harold Attinger gone we can believe the struggle on behalf of the American government as they balance empathy for their Autobot friends against the fear of absolute extinction. So we get a tough guy in TRF agent Santos (Santiago Cabrera) opposite a soldier who remembers in Lennox (Josh Duhamel). Their goals are the same even if their methods aren’t, but neither is willing to sacrifice his humanity in the process like Age of Extinction‘s over-the-top villains. Their hunt for Cade and the Autobots pushes the latter onto his pathway towards Burton while ensuring their own relevancy for the climax.

Cade and Vivian are mankind’s last hope with one possessing the power to help awaken a brainwashed Prime (tasked by Quintessa to let Cybertron siphon off Earth’s core’s power for rebirth) and the other the DNA to wield the aforementioned Staff. How it plays out is convoluted as always, but Hopkins’ explanations are a delight to experience nonetheless (despite his rampant sexism, Tourette’s level use of the word “bitch,” and acknowledged C3PO-lite butler in Jim Carter‘s sociopathic Cogman). The power of the ancient alliance between Merlin and the Autobot Knights is strong, dangerous, and ripe for dramatic battles. Thankfully Bay allows this latter action to exist on the ground rather than in the air. A fight between Prime and Bumblebee in the water is a sight to behold.

This franchise’s brawls are most effective when the Transformers interact with their surroundings while humans get caught in the crossfire. Age of Extinction forgot this and spent too much time with robot on robot war without true stakes. So the number of clashes utilizing choreography for the actors to engage with the explosions and behemoth aliens is a welcome change. The weight that the last installment hoped to instill takes form now as the planet once more unites to take on an impossible Decepticon antagonist. We don’t waste time with unfunny plot asides like we did with Tucci’s Joshua Joyce or John Turturro‘s Simmons (who does return here, reined in as device rather than distraction). It’s amazing what having just one devoted endgame can do to our investment.

Unfortunately there’s still a lot to dislike. The Last Knight might be fun, but it remains less successful than the first. There are missteps in plot continuity: casting Tucci as Merlin without letting his Joyce be the magician’s “last” descendant; bringing Megatron back as a “real” Transformer despite that iteration dying to be replaced by new-wave Galvatron with a completely different transforming style seemingly erased from canon; and ham-fistedly shoe-horning the Witwicky family into the film’s new lore with enough ubiquity to render it stupider for our not knowing while Sam was the star. There’s also poorly handled stereotypes like Cade’s chastity making him sensitive and attractive despite Vivian’s making her the butt of spinster jokes. And who can forget OCD-triggering levels of random aspect ratio changes with no purpose besides marking each cut?

It’s this kind of poor craftsmanship and nonsense that prevents Bay’s flagship from garnering critical acclaim. It’s still closer to R than PG-13 like the last film too, a reality placing its appeal in a no man’s land of relevance. Too goofy and broad to excel dramatically, it’s too dark to be dismissed as family friendly hokum as well. And despite the “strike while the iron’s hot” mentality providing the benefit of the doubt to keep churning, that iron has cooled drastically. With Bay and Wahlberg (theoretically) exiting, the time to stop is upon us. A disastrous opening box office should tell Paramount all they need to know. It’ll take more than a cliffhanger stinger pretty much foreshadowing a recycling of this same exact plot to keep going.