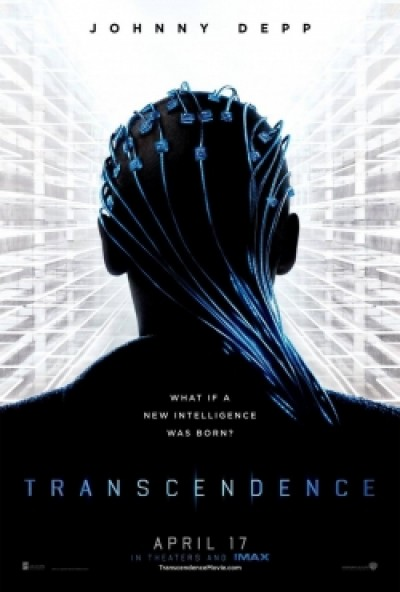 “They say there’s power in Boston”

With a trailer digitizing Johnny Depp and electronic machinery created out of thin air, it’s an understatement to say I was surprised the beginning of Transcendence introduced a world without power. I thought the film was about new technology and the advancement of artificial intelligence harboring a potential for hubristic power grabs and the genocide of organic thinking/emotional response. Instead I saw broken screens on the street and a shop owner wedging a chewed-up keyboard into the gap between his door and the ground to prop it open. Only when Paul Bettany‘s voiceover speaks of “knowing” the Casters’ genius do we realize this is a future born from the above aspects that Jack Paglen‘s script does provide. A “Five Years Earlier” subtitle later and we’re shown the very road our own reality is currently traveling upon.

Strip away the unavoidable melodrama a story about man versus machine and what it means to be human needs and you’ll find Paglen has infused some solid science fiction commentary into a debut screenplay that was unsurprisingly picked up off Hollywood’s 2012 The Black List. Rather than devote his time to this prologue’s post-internet world a la “Revolution”, however, he delves into its equally intriguing cause. As a result Transcendence earns comparisons to another popular television show currently in broadcast: “Person of Interest”. Both question the benefits of a sentient AI and its computational ability to look past the ones and zeros of utilitarian black and white for compassionate grays. While the show uses an empathetic team of “soldiers” with checkered pasts to keep it honest, Paglen wonders what happens if human consciousness provides the source code.

As such he journeys into the realm of mankind’s desire to become God. The closest to this breakthrough are three men: Dr. Joseph Tagger (Morgan Freeman), Dr. Will Caster (Depp), and Dr. Thomas Casey (Xander Berkeley). And how do you combat their minds’ want for discovery of the unknown and synthetic children they believe in their hearts will improve the world? You destroy them like any good terrorist group looking past the idealistic endgame to spy the potential for darkness in giving that much control to a machine would do. The luddites in this case arrive in the form of R.I.F.T. (Revolutionary Independence from Technology), a collection of converted minds who took pause when technological advancement became scary rather than ignore the looming nightmare. They infiltrate, engage, and soon—in great sci-fi fashion—accelerate humanity’s demise.

This is all laid out—somewhat obtusely—in the trailer, so I’ll try not to move into spoiler territory by talking about how everything else progresses. Let’s just say that Evelyn Caster (Rebecca Hall) and friend/colleague Max Waters’ (Bettany) decision to upload Will’s memories and intelligence into the elaborate AI he created during life proves one more entry along a timeline towards war. I was so excited for this prospect because it was a perfect plot progression, a bleak future wherein attempts at advancement help destroy all hope of survival. I didn’t even care the prospect meant cribbing fromTerminator a bit because I knew Paglen and long-time cinematographer/first-time director Wally Pfister weren’t going to turn this behind-the-scenes, programmers’ vantage point into an explosive actioner. It’s only in retrospect I now wish they did.

My issue with the film lies not in its ambition but its execution. Pfister’s inexperience aside—a few weird visual and performance-based transitions throughout make early instances of Depp’s acting appear horrid—one can see the endgame for blockbuster box office glory. There are so many interesting details left languishing in the background as the script takes their evolution for granted to stick with the developing, specific human conflict between man (Bettany’s Max, Freeman’s Tagger, Cillian Murphy‘s FBI Agent Buchanan, and Kate Mara‘s R.I.F.T. leader Bree), machine (Depp’s Caster), and hope’s indecision at picking sides when the benefits are real if you ignore the means (Hall’s Evelyn). There’s nanotechnology, tissue regeneration, networked consciousness, and other super cool ideas ripe for global consumption and reaction. But that wasn’t Paglen’s plan.

Transcendence is missing a very key component to this type of large-scale science fiction endeavor: a character with which we as “normal” people can relate. There is no Sarah Connor taken from obscurity and made into a symbol of resistance, no blue collar Harry Stamper or Bud Brigman to ignore the tech-speak and get to the heart of the situation. Instead we just have scientists and more importantly the scientists who have been working on the technology that threatens their world from the start. Bettany’s Max does give us a modicum of push when things begin to go out of control, but his loyalty to the Casters doesn’t allow him to really be the hero the film covets. Even Mara’s Bree began as a contemporary to this scientific evolution before fracturing off so vehemently.

It isn’t nearly as fun to watch “smart” people save us without our knowledge—from their own creation no less—as it is an everyman joining the fight after viewing the large-scale ramifications beyond a defunct town. Paglen compartmentalizes his tale so wholly that we never truly enter it as more than voyeurs. So all the real thought-provoking questions (whether AI Will is actually him or the operating system underneath pretending to get its way and whether mind-control is an acceptable consequence of immortality) become just that: questions. Does the former’s answer mean anything to anyone besides Evelyn and Max in its present context? Not really. The latter is absorbed as an afterthought when it should be paramount because its answer is impossible to know without relinquishing our freedom. Maybe R.I.F.T. is correct: it’s not worth finding out.