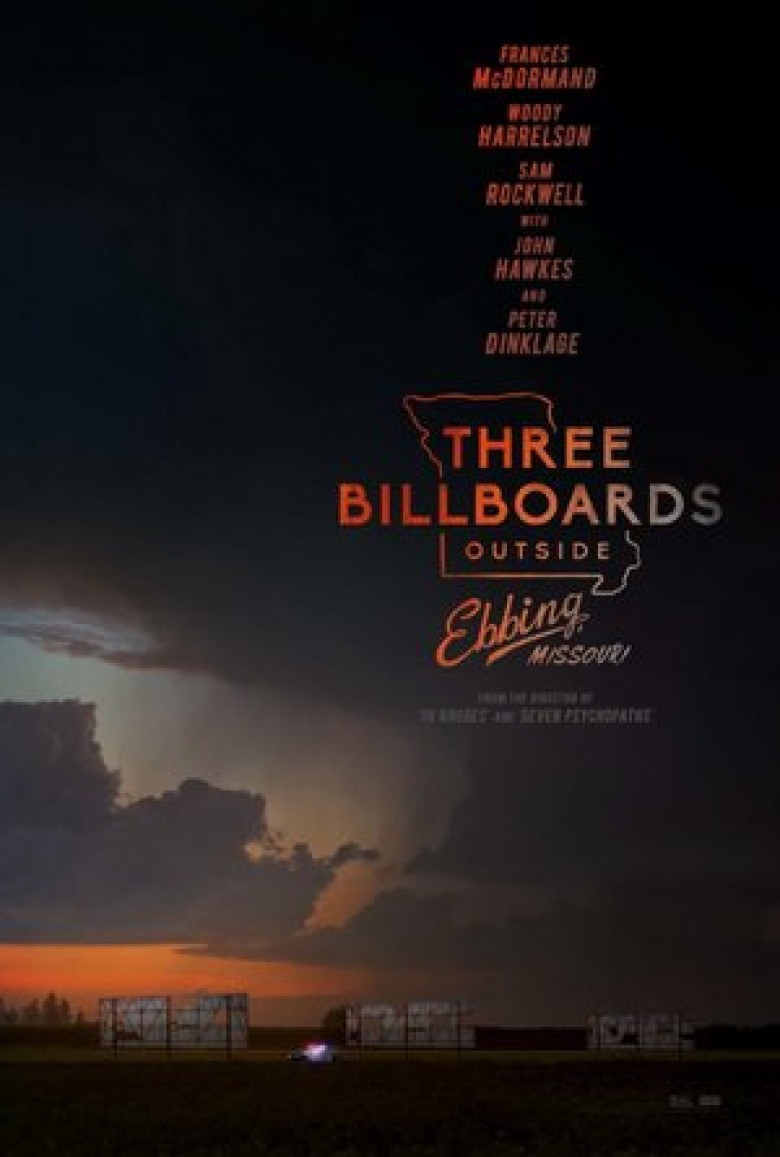 “It’s hard to know what to do”

It’s no coincidence that the dumbest character in Martin McDonagh‘s Three Billboards Outside Ebbing, Missouri says the most revealing line of dialogue throughout the entire film: “Anger begets more anger.” I guess it’s because Penelope (Samara Weaving) isn’t dumb as much as she’s naïvely innocent and young. She’s still idealistic about a world that has yet to throw any great tragedies her way. She’s still elastic enough to take being laid off from work in stride because there’s always another job out there. McDonagh therefore writes this character to be more than comic relief against a wealth of serious, cynical, and ferocious counterparts. He writes her to be a reminder of what we once were. We laugh because we’re keenly aware we’ll never be that blissfully ignorant again.

We’re the angry townspeople, the vociferous screams of selfish ego and desires, and the cowards putting up a big front despite not actually caring enough about things to act until our personal lives are affected. Welcome to our era of petty bickering and party line voting, of media sound-bytes treated as journalistic fact because we can’t bother to learn truth when it’s easier to believe lies read within snarky, biased, reductive “tweets.” Penelope—by way of the Bible, or that “Polio” book she was reading—is correct about anger. It does beget more because empathy comes at too high a cost. So even if we respect our opponent. Even if we believe they’re doing their best. We will fight them because we don’t know what else to do.

And sometimes we should. To imagine what Mildred Hayes (Frances McDormand) is experiencing is to conjure images of nightmare. She’s a cocktail of rage, guilt, and hopelessness. It’s been almost a year since her daughter Angela (Kathryn Newton) was raped and murdered yet not even one arrest was made. Ebbing is a sleepy little town in Missouri, but you’d have to think someone would know something. That someone would remember seeing someone. Just because the assailant’s DNA doesn’t match that of any criminals in the entirety of these United States doesn’t mean you just put the file on a shelf and hope you get lucky five years down the road. Or does it? What can the police do when every lead is exhausted? What can she do?

The answer to that last question is to ensure no one forgets what happened. So she forks over five grand to local ad-man Red Welby (Caleb Landry Jones) and calls Chief Willoughby (Woody Harrelson) out. If her daughter’s killer can’t be brought to justice, someone must. Why not the man in charge of the investigation? Why not the one person in a legal position to actually do something regardless of how much her grief weighs upon him? Should she care about his rumored health issues and the added stress painting him the villain will cause? Should she care about anything else besides causing a scene large enough that Angela’s name is on the lips of every man, woman, and child? Maybe she’s lashing out. But maybe she’s right.

Mildred’s stunt is a consequence. She’s replying in kind as those around her turn their downward glances of sympathy into silent pity and relief that they aren’t in her shoes. But what of the consequences earned by those billboards of remembrance? McDonagh doesn’t forget their existence. He doesn’t turn this escapade into a cookie-cutter hunt for justice wherein desperate times call for desperate measures. He doesn’t assume that the world will hear Mildred’s plea and come running to help lift every stone left unturned. No. McDonagh draws the authentic, angry response our world creates every minute of every day. He supplies her allies and enemies and shows that others can hate just as much as she. He provides a damning treatise on twenty-first century rhetoric spewed in blood.

It’s delivered via complex characters for which first impressions possess unseen depth. McDonagh writes the simple, racist cop (Sam Rockwell‘s James Dixon) who lets his temper augment a monster within. He writes a police chief who cares so much about this heinous crime that occurred on his watch that only the mother of the deceased could care more despite his own monumental emotional hardships. There’s Welby, a man with enough backbone to cause a stir but little conviction to see it through. There’s Mildred’s son Robbie (Lucas Hedges) whose anger spills over in surprising and mature ways. There’s her abusive ex-husband (John Hawkes‘ Charlie), a man with a crush (Peter Dinklage‘s James), and friends whom she knows (Amanda Warren‘s Denise) and doesn’t (Darrell Britt-Gibson‘s Jerome) providing assistance.

And just like in the real world when our nation’s monthly mass shooting arrives to “thoughts and prayers” before everyone sees it forgotten, the demands for justice and prevention earn more vitriol and action than the actual crime. To so many of us murder is simple. It’s tragic and heartbreaking, but it’s also over. You can’t bring the dead back to life, you can only move on. The hard part is discussing what to do next. The part wherein all the cockroaches, opportunists, and sympathizers come out with blood boiling isn’t the sight of all those dead children. It’s not the charred, defiled remains of Mildred’s little girl. No, it’s the dialogue we should have but never do. It’s the bi-partisan conversations for reform we ignore for shouting matches instead.

So of course Mildred is met with more passion than Ebbing ever showed upon discovering a homicidal rapist was in their midst. Suddenly the town takes sides: the grieving mother (proponents of gun control for example) against the law doing “everything it can” (government officials dragging feet because of the law rather than lighting a fire to change it). McDonagh brings the violent fury you’d hope arose ten months ago for the right reasons but only appears when it’s too late for the wrong ones. But he also shows the human compassion we still possess beneath our public personas. He allows these tender moments between Mildred and Willoughby that transcend their fight to reveal the humanity we’re too quick to dismiss as weakness. He gives the faceless hoard nuance.

This is why Three Billboards resonates so much. Not only can we see the alt-right and antifa stereotypes in these crazy, bloodthirsty animals practicing eye-for-an-eye vengeance all because of some words on a few derelict billboards erected on a road no one drives down. We can also see ourselves. We can acknowledge how we’ve all gone a little nutty at times. We’ve all forgotten our sensibilities for a moment of pure experiential reward no matter who is unlucky enough to suffer as collateral damage. We all blame others because it hurts too much to constantly blame ourselves. That mix of rage, guilt, and hopelessness within Mildred, Willoughby, and Dixon (amongst others) for completely different reasons stems from unforgettably tragic backstories McDonagh meticulous manufactures for the greatest and most honest impact.

And boy does McDormand shoulder those emotions in a way that renders her helplessly broken and scarily empowered within the same scene. She’s a tumultuous roller coaster of impulse, her back against a wall she will no longer allow herself to touch. Just because she channels her outrage for a good cause as opposed to Dixon’s backwoods, southern upbringing of intrinsic white supremacy doesn’t mean it’s righteous. We can’t condone what she does once this war of attrition escalates out of decency’s control, but we also can’t blame her. She’s acting out of knee-jerk emotion just like Dixon (no one could portray this character’s blind aggression and confused psyche to earn real sympathy but Rockwell). It’s the only way they know how to grab the attention of the surrounding sheep.

The layers McDonagh provides are the stuff of legend. The way he can expand a character in death through voiceover correspondence is head-shakingly good. But the actors aren’t far behind either as each lends three-dimensionality to his words no matter how trite they may seem on paper. Whenever a profane name is thrown at someone, it hits with color that could be jovial, biting, or irreverent. One scene has Mildred talking to herself through her bunny slippers and yet it feels right in-line with the barroom brawls, Molotov cocktails, and kicks to the groin. Not one single line is misplaced or unnecessary. Not one action occurs without a consequence yet to come (for better or worse). Everything builds to greater anger, greater blindness to law and order.

Sadly there seems no end to this escalation. If you want to know where these characters go once the screen cuts to black, just look outside. Sign onto the internet or watch today’s “entertainment” news. They—like us—may pause to think about what they’re about to do, but the anger remains in control. It’s just like when you throw your hands in the air and declare you’re quitting Twitter to not feed the hate. You may stay off for an hour, maybe a day or week. But eventually that rage will force you to look again and rejoin the never-ending circle of “You’re wrong and I’m right!” Suddenly everyone is an expert, everyone a crook. We revel in instant gratification ignorant to the fact it accomplishes nothing.