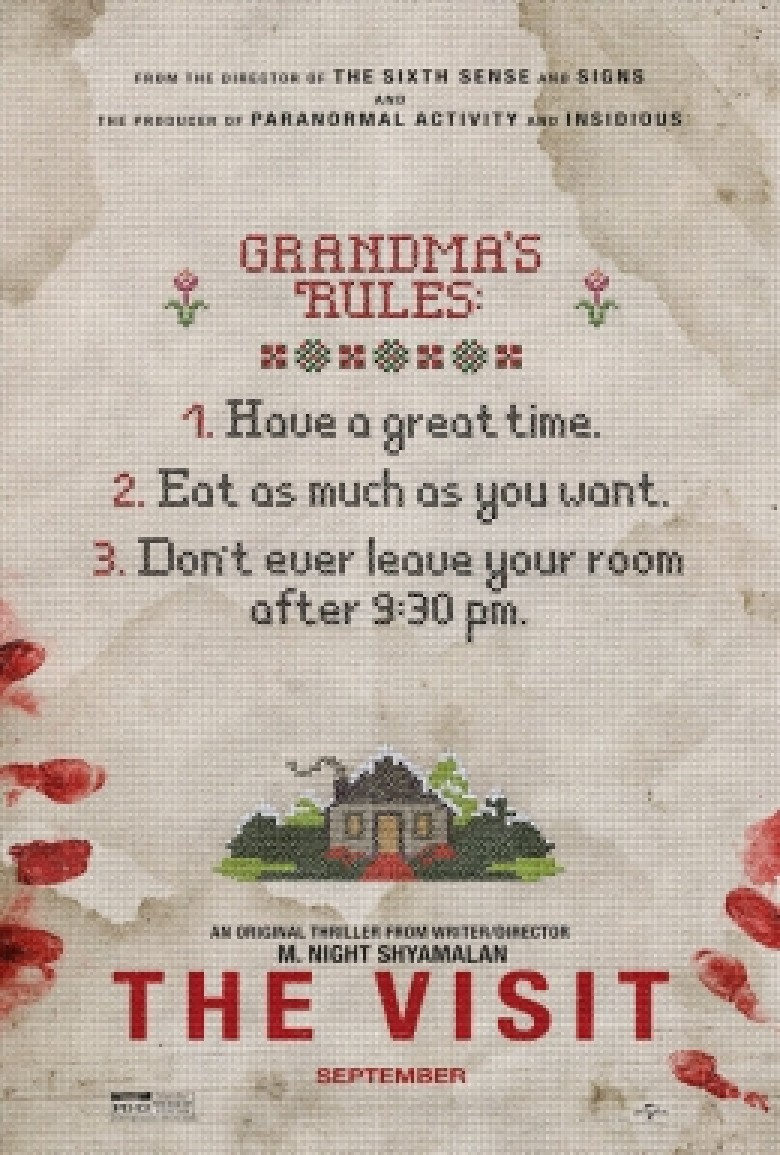 It’s no secret that M. Night Shyamalan needed a winner after a string of box office and commercial failures. Firmly in the minority saying The Village and Lady in the Water are his two best—the former is one of my all-time favorites—my idea of his failings doesn’t necessarily coincide with the movie-going public, but I was relishing the thought of seeing what the embattled artist could do with a stripped-down, found footage horror. With reviews seemingly positive and financials proving lucrative at ten times the budget and counting, it appeared things finally turned around. The question then remained whether or not I’d enjoy it. Well, perhaps that’s not the question since I did enjoy it. I’m just not so certain I liked it.

If I were to compare The Visit to another of his films I’d choose Signs. While this should comfort some who believe it was his last “great” work, my paralleling the two is due to what I disliked most about both. Shyamalan is known for his twists and that maneuvering inherently means some manipulation is inevitable. I get that and it’s okay as long as I don’t feel as though he’s in the background smiling at how clever he is during the entire piece. Actions and expositional stories about characters came so heavy-handedly in Sign‘s extra-terrestrial yarn that I completely checked out when each tidbit proved instrumental to how the climax unfolded. Conversely, he welcomingly played with this idea in Lady in the Water by mocking it.

Unfortunately back to old habits here, he ensures each main character’s “interview” of deeply personal memory possesses emotional meaning for the conclusion. It’s sloppy storytelling positing that we aren’t intelligent enough to just sit and watch the plot unfold. The actions of characters can simply be actions performed in the heat of the moment—courage/bravery or malicious terror rising to the surface in extreme duress. We don’t need each to also have crippling anxiety or psychological hang-ups to miraculously be resolved in that same moment of truth. Forcing such asks too much and throws all naturalism out the window to expose exactly how carefully drawn with artifice every character is. Shyamalan tries to subvert it with humor again, but this is a wholly different beast.

It’s not surprising to learn he had difficulty finding the right tone—cutting an art house piece first and a straight-on comedy second before settling in the middle for what’s onscreen. The humor’s entertaining and does add a nice change of pace to the scares by mixing laughter and fright together, but it takes something away from the story’s effectiveness. It lends the movie a falseness I couldn’t shake as though it was all a dream or amateurish production of a script young aspiring filmmaker Becca (Olivia DeJonge) had crafted. What it doesn’t do is give credence to the conceit that The Visit is actually a documentary culled from footage captured during a week vacation with her grandparents (Deanna Dunagan‘s Nana and Peter McRobbie‘s Pop Pop).

But that is what Shyamalan wants us to believe. The film isn’t therefore found footage—there isn’t some opening scrawl explaining how the hard drives were recovered years later or watermarks portraying how everything was now local police department property. At least one of the characters makes it out of this ordeal alive to finish the film for us. This doesn’t distract from the suspense as much as give the final product a subjective eye in lieu of found footage objectivity. It’s not raw documentation; it’s a vision someone molded. This is an important difference because it means the fictional artist behind it wanted it to be a comedy despite having endured the truly horrific circumstances at its back.

I was always held at arm’s length as a result because there aren’t any surprises. Everything had a purpose and my mind began to put the blatant clues together in order to discover the “twist” very early on. Then little plot holes like internet connectivity crept in to push me even further away. If the script stuck with Becca’s brother Tyler (Ed Oxenbould) explaining how he had no bars on his phone, all would be okay. But it doesn’t. It proceeds to then have her exclaim in frustration that a 9:30pm bedtime without wifi will be tortuous. Well, if there is no wifi or telephone network how are they constantly Skyping Mom (Kathryn Hahn) wirelessly from a laptop and looking up terms like sundowning?

This is something I’d usually forgive or not even notice if I was fully committed to the story, but I never was. My experience became more about how funny Shyamalan could render genre-staple scares as Nana and Pop Pop go over the deep end. Oxenbould with his dweeb physicality juxtaposed against a confident personality and Hahn’s interludes of relaxation in the sun while her kids uncover lunacy are fun, but I wonder whether the whole would have been better suited with each toned down more. The same goes with DeJonge’s over-the-top pretension when it comes to cinematic terminology and elitist sensibilities towards shooting a home movie. Dunagan and McRobbie embrace their characters’ constant 180-degree turns from jolly to dead-eyed, but it’s not enough.

There are great pieces, though, with the climatic game of Yahtzee devolving into actual horror proving the best. Shyamalan delivers good quick jumps with imagery hidden or off-screen sharply coming into view, but we aren’t allowed to truly appreciate them when some comedic capper would render it innocuous a second later. I’d love to see what the first cut of The Visit held because there’s definitely potential with more nuance and a subtler touch. Sadly, as soon as Tyler talked about his experience playing Pee Wee football and Becca her self-esteem issues, memories of Joaquin Phoenix and his baseball bat were conjured. What could have been a tense ride through mystery became a chore wondering when they’d overcome their fears to survive.