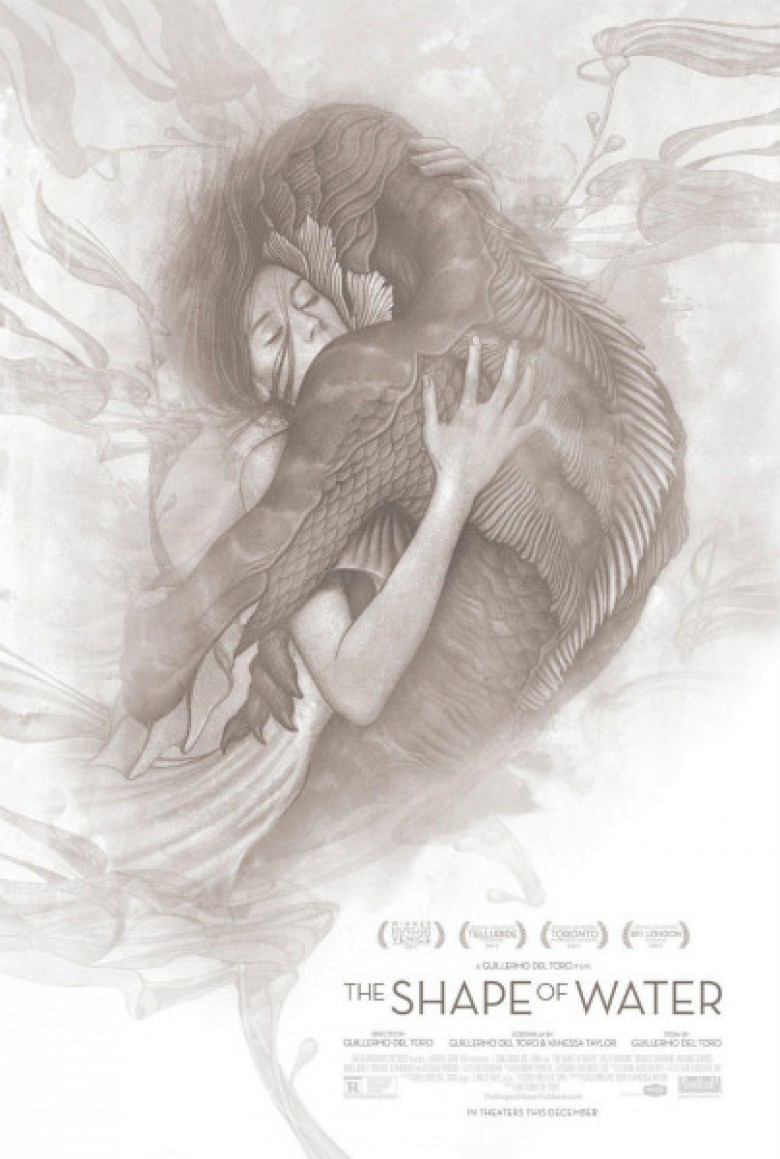 Leave it to Guillermo del Toro to create an adult fantasy in the vein of Beauty and the Beast wherein there is no “beauty,” only the “other.” It’s one thing to read or watch a tale of overcoming the odds as a child with a specimen of perfection finding it in his/her heart to give a “monster” love, but such utopic vision is too reductive to the mind of someone who has experienced the difficulties of living in a world built on advancement and superiority. Kids are allowed to think of themselves as Belles—the “normal” ones with so much to give—despite the fact that they seek acceptance like the Beast. Even if we are somehow perfect, we can never know it because vanity itself is an imperfection.

Life instead consists of misfits and outcasts dismissed and ignored. Those with the white picket fence, loving spouse, and two children only adopt a façade of happiness because the work it takes to sustain it leaves fatigue, annoyance, and unhealthy expectations. True bliss comes from freedom and as such proves a rare commodity to acquire beyond a carefully manufactured act. No, we’re mostly the quiet wallflowers stuck within a routine that comforts even as it crushes. We wake to the alarm, fix our usual meal, and drive to work in order to pay for everything necessary to do it again tomorrow. Happiness becomes a dream to aspire towards whether the prospects look good or not. Contentment is what we receive instead: contentment and the looming certainty of disappointment.

We resign ourselves to that fate, closing ourselves off to the possibility of changing fortunes. We delude ourselves into thinking our escape will come from a grand gesture or stroke of luck like Belle breaking the spell or Prince Charming sweeping us off our feet. So when trivial matters arise with the power to deliver the impossible, we overlook them. Sometimes we reject them outright with some unearned vindictiveness or dominance adopted from the futility of always being let down by family, friends, and more often than not ourselves. It’s easy to see an “other” with society’s hive eyes of revulsion even as you are seen the same way. We strive so hard to “keep up with the Joneses” that we forget how special we as outliers are.

This is why Elisa Esposito (Sally Hawkins) resonates. She’s all of us: awkward, tardy, prone to distraction, and “broken” (in her case mute). She lives in an apartment above a fledgling movie theater next to one of her two friends (Richard Jenkins‘ Giles), works as a custodian inside a scientific research facility with the other (Octavia Spencer‘s Zelda), and enjoys the company of those who don’t treat her differently and the silent avoidance of those who do. Elisa knows what others think and it does matter, whether she lets them know as much or not. But she endures. She smiles politely and keeps her head down. She eats her hard-boiled eggs, tap dances in the hallways when the mood strikes, and masturbates in the tub for satisfaction.

These are her warts and badges of honor. They’re what make her real. As Jenkins’ Giles narrates, he could have spoken about a princess and the impossible. But we don’t need that type of filter anymore. We don’t need the pleasantries of artifice when the universality of authenticity proves profoundly more effective in its bluntly relatable sincerity. So del Toro and co-writer Vanessa Taylor strip away that layer of optimism fairy tales generally hold too tight for young minds. They allow The Shape of Water to retain all the harsh edges of villainy with stakes to instill fear. They force Elisa’s friends to second-guess their own survival instincts to help her and draw the man in their way (Michael Shannon‘s Strickland) with a Biblical wrath ready to unleash.

The prize they seek is a “monster” in looks yet delicately intelligent in everything else (if one took the time to notice). This “Asset” (Doug Jones) is unquantifiable and therefore priceless dead or alive during a Cold War setting of 1962 Baltimore. The Americans have him (Nick Searcy‘s General Hoyt in command with Strickland on the ground supervising) and thus the Russians obviously want him. Will his adaptive body and breathing methods provide the answers to traveling in the vacuum of space? Can those answers be discovered post-mortem so that the enemy will not have the opportunity to take him away? And what happens when a woman like Elisa, trapped within the prison that is life as an “other,” shows him the kindness he deserves? Can love prevail?

What it all adds up to is a heartwarming race against time to save a living creature with the same God-given right to remain living that we too possess. It’s an unlikely romance between the “thing” that cannot be seen and the woman whose ability to see is her means of communication. Elisa recognizes the kindness in his eyes, the uncertainty of rage mixed with dread that we all feel when confronted by an immoral mob. She knows it because she sees the same truth in Zelda (a black woman literally proving herself to be a driving force within the machine that everyone around her takes for granted) and Giles (an aging gay man who’s experienced the sour turn of realization on too many faces when vulnerably honest).

They’re the invisible actors doing everything to not be noticed since attention puts them in chains like The Asset. They’re the people someone with authority and an abundance of confidence crush beneath his boot. They’re the abominations a God-fearing man like Strickland can gaze upon in disgust, rile with smug satisfaction, and approach with an entitled air of ownership should he desire. And as he seeks to exterminate that which exists to test his faith and expose his motivations, they dig deeper to discover what it means to be a human being possessed with empathy. The verdict remains out on Dr. Hoffstetler (Michael Stuhlbarg) as far as toeing the company line or listening to his conscience, but that need to decide proves he’s not yet lost.

There’s a sense of urgency from the moment The Asset is brought to Elisa’s work and yet the film unfolds with a leisurely pace so we can appreciate the little things. Whether it’s the disgruntled gossip of Zelda (Spencer is a scene-stealer throughout) or the simple joy a good musical provides Giles (Jenkins brilliantly showcases the internal war between survival and duty), we can’t help but smile despite the constant threat of Strickland’s cavalierly selfish malice (Shannon walks to the edge of over-the-top yet never falls over). No matter how dark this world proves or how bloody del Toro allows it to be, a sense of hope forever lingers. We know how bad things can and probably will turn out, yet we still believe Elisa’s heart will prevail.

This is true because of Hawkins. Her grin says as much as any line of dialogue could just like her incredulity and physical anger when someone she trusts attempts to brush her off. Elisa is a woman who’s embraced routine and settled for what it provides regardless of its inability to move beyond its constraints. Finding what she never thought she could possess is therefore genuine in its potential. She becomes empowered by having something to fight for, by having someone who will fight for her. And in the end The Shape of Water shows us that it’s never too late to be understood or seen. It reveals how Gods in our image are merely projections of our own limitations. Look beyond surfaces and see with your heart.