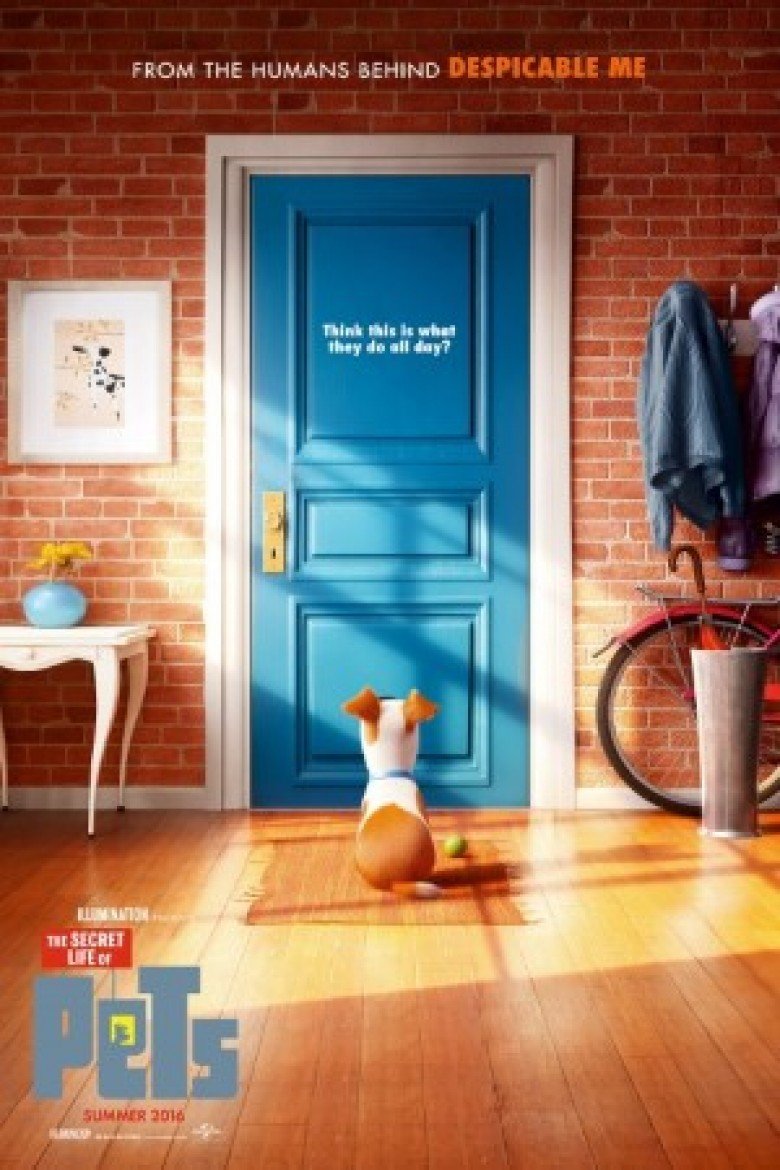 Illumination Entertainment’s latest film The Secret Life of Pets has an amazing hook: what do our pets do while we’re gone? We could obviously pay Comcast Xfinity to supply cameras and discover the answer to that question—why use product placement when you can show a commercial before the film that uses its characters as shills—but it’s more fun to imagine the possibilities ourselves. If you’ve seen any of the trailers you’ll know this is precisely what Ken Daurio, Brian Lynch, and Cinco Paul have done. Their gags run the gamut, from dog waiting patiently for hours, cat wreaking havoc, and poodle moshing to metal on the iPod. We laugh because some are true and others provide hilarious juxtapositions we wish were true. It’s Toy Story with pets.

Like that Pixar classic, however, the hook only goes so far before you must introduce a story. That, too, is very similar, as Katie’s (Ellie Kemper) loveable dog Max (Louis C.K.) finds himself staring straight into the eyes of what could very likely be his replacement: Duke (Eric Stonestreet). Just like when his owner found him with nowhere to go in a box labeled “free puppies,” the newest edition to the family was just days away from being euthanized at the pound. So he’s here now, a brutish pooch with a temper that will do whatever is necessary to keep his spot by Katie’s side. He’s a bully by necessity and Max must play his game to reinstate superiority. This takes the form of breaking things because the “new guy” will obviously be blamed.

Personalities clash as opportunism is replaced by malicious intent and suddenly Max and Duke are lost in a dark alley opposite Ozone (Steve Coogan) the feral cat. One thing leads to another as New York’s finest dogcatchers and a motley crew of discarded animals calling themselves the “Flushed Pets” begin chasing them around the city. The duo is running for their lives while Katie is none the wiser at work or wherever she goes. Stopping at nothing to find them, Flushed Pets leader Snowball the bunny (Kevin Hart) seeks revenge for an accident Max and Duke sparked. And on the flip side is Gidget (Jenny Slate), the prim and proper show cat of post-modern hipsters, in love with Max and ready to bare teeth to retrieve him.

Whereas Toy Story trusted its heroes to go on their quest and inevitably fall into dangerous situations along the way, The Secret Life of Pets bombards its protagonists with characters in constant pursuit. We aren’t simply following Max and Duke around so Gidget and her gang can find them before everyone turns around and survives the ensuing adventure. We instead tail Max and Duke as they run farther and farther from home in the hope of one day returning; Gidget, Tiberius the falcon (Albert Brooks), Pops the paralyzed dog (Dana Carvey), Chloe the bothered cat (Lake Bell), and more retrace their friends’ steps and end up in danger themselves. Snowball’s posse wildly tries to create anarchy by destroying humanity and any pet willing to abide by its rules.

Danger isn’t met, it’s provided. There are so many characters milling about for directors Chris Renaud and Yarrow Cheney to wrangle, and yet they don’t come together until there are maybe ten minutes left to quell the chaos. Who is the focus? Should we care more about Max and his struggles with Duke? Or is Gidget’s unrequited love and fierce aggression our main focal point since she’s the only pro-active hero of the bunch? And can we forget about Snowball’s tragic backstory that made him bitter? Shouldn’t we hope for a turnaround in attitude? I honestly didn’t know, and the sheer number of choices made my head hurt. Every ten minutes brings a brand new character into the fold with its own set of skills and sorrows. It’s a zoo.

I was simply unable to invest in anyone’s plight, and neither did the film. With so much time spent setting Max up as the lead, his disappearances for long stretches of time is inexcusable. So is deciding to half-heartedly inject emotional tugs that disappear as abruptly as they arrive—sorry Fred, we hardly knew you. There’s definitely something here, but the kitchen sink method of inundating audiences with excess to hide the fact that the plot could be resolved in thirty minutes or less derails its potential. Besides in-jokes for pet owners littering the opening act, I only really remember two other distinctly fantastic sequences. One was a dream interlude of dogs eating dancing hula sausages and the other was watching a sweet and tiny fur-ball kick some major ass.

By the end the humans are irresponsible egomaniacs who treat their pets like property, and the pets in turn appear helpless and dumb in their lack of self-respect. The film doesn’t set them up to be obedient servants because it’s not just about dogs. Showing how much love they have for their owners is the draw, and yet it’s the one part of the whole that has no bearing on the actual story. The fact that these humans are reckless is what gets the ball rolling, both by the impulsiveness of Katie in getting a new dog, and a dog walker’s disregard for responsibility. I found myself aligning with the Flushed Pets because their thesis seemed truest. Watching each pet embrace his/her owner at the conclusion felt false.

But they’re cute, and I guess that’s the real movie motive. Illumination is looking to entertain kiddies with adorableness and parents with the oft-adult-centered joke. It’s caricature incarnate and it works in keeping our attention no matter how intent it is on scrambling our brains. The role of Max caters specifically to C.K. so the character’s dryness may go over kids’ heads, but Slate’s Gidget ensures that no one is bored through sheer manic energy. Hart is funny, Stonestreet is a great straight man, and Brooks does what Brooks does. Bell apathy as Chloe’s is a standout, proving that Pets is all about the characters—where they go and what they do is merely an afterthought. This provides a fun 90-minutes, but little staying power.