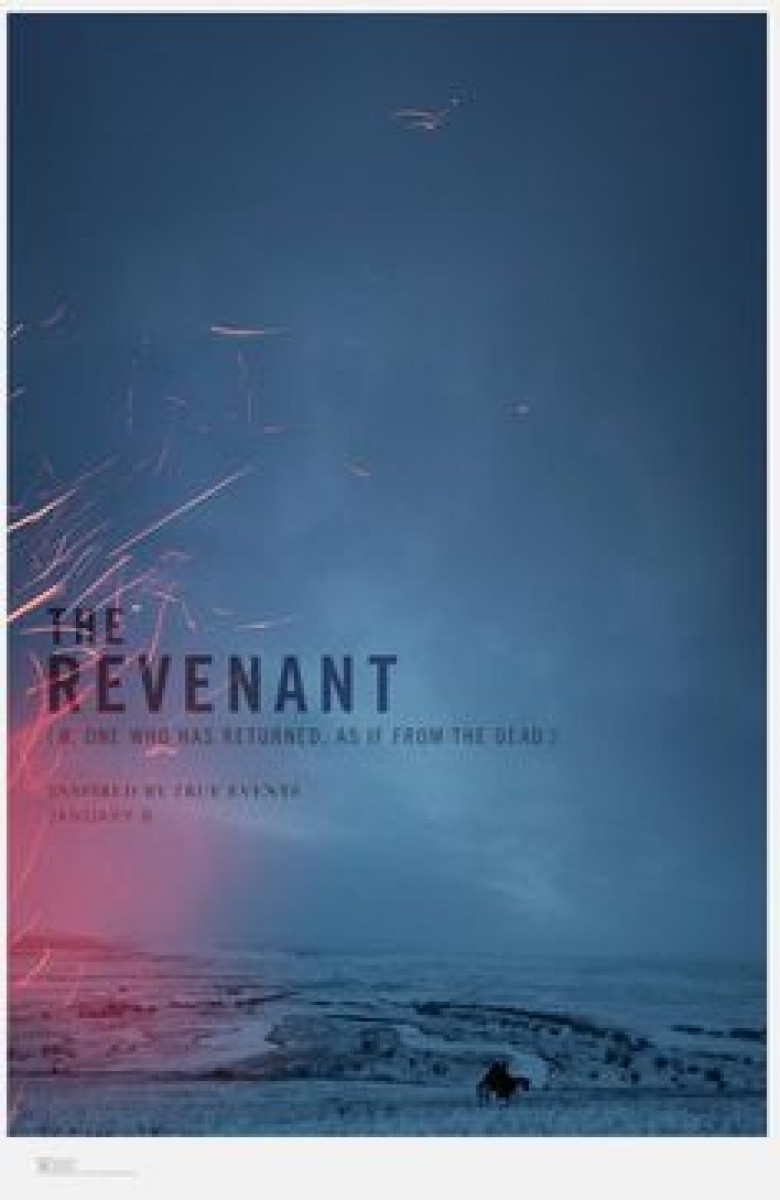 “As long as you can still grab a breath … you fight”

If we’re to go by the setting of Michael Punke‘s novel The Revenant on which Mark L. Smith based his script—director Alejandro González Iñárritu gets a co-writing credit after coming onboard—the year is 1822 and the Central American frontier is loaded with fur traders pillaging Native American land, animals, and women. Captain Andrew Henry (Domhnall Gleeson) leads a band of men under the authority of his employer to procure pelts and return to camp with Hugh Glass (Leonardo DiCaprio) as their guide. A man with a foot in two worlds, Glass has nothing but his half-Pawnee son to his name. Rumor has it that he killed an officer of the law when their village was raided and his wife murdered. The frontier is now his home.

Every behind the scenes production story appears confirmed as soon as the film begins from the gorgeous natural lighting that ballooned the budget to the complex cinematography and arduous conditions causing extreme crew turnover due to firings and resignations. The camera follows Glass and his son Hawk (Forrest Goodluck) tracking an elk in the forest; a solitary gunshot cuts through the beast off-screen as an arrow flies through a trapper’s neck back at camp. A group of Ree has arrived with malice in their hearts after their leader’s daughter Powaqa (Melaw Nakehk’o) was kidnapped. We don’t know if Henry’s contingent is to blame but the Ree certainly don’t care to ask once a fluidly plastic “long take” manufactured like Iñárritu’s Birdman soaks the screen with blood and bodies.

It’s a brutal dance of death with arrows and bullets flying past the lens a la Saving Private Ryan‘s start. Men on horses scalp and fall as those on the ground retreat ever slower once more limbs become worthless by injury. Glass has returned with rifle high and teeth gritted, the camera swimming through the chaos as victims are submerged underwater or found hiding in the trees. There are no computer effects to enhance the action via green screen, just the raw visceral punishment of war with humanity left far behind. Escape is merely a disheartening reality where odds prove that certain death still looms. Those who remain are under Henry’s command and he says to do what Glass asks of them. He’s their one hope for survival.

Suffice it to say, spirits fall even further when the men later come upon him bloodied and battered beneath a massive bear. A lot has been said of the scene wherein Glass is attacked, but rest assured nothing resembles rape during the extended mauling that’s undertaken. DiCaprio is flung and dragged, clawed at and jumped upon with the animal constantly stopping to smell him (breath fogging the frame) while deciding what’s next. Kudos to the effects team for what looks like a real bear besides its points of contact with the actor—making me assume it was a person in a motion capture suit dragging him to and fro—because the scene is gripping and cringe-inducing. DiCaprio screams and gurgles as life spills out onto the forest ground.

It’s but one instance of extreme violence for which Iñárritu and company pull no punches rounded out by more Native American attacks and fire-ravaged settlements smoking in the wind. No one’s safe with a French trapping crew supplying the Ree guns and ammunition while the approaching snow threatens to take everyone out regardless. But as the title and trailer explain, the real force of reckoning is Glass. Left for dead by a mercenary Henry hired as another able-bodied worker (Tom Hardy‘s treacherous John Fitzgerald), Glass eventually exits his shallow grave a lost soul overflowing with vengeance. The majority of The Revenant‘s 156-minute epic western of despair is therefore his 3,000-plus mile journey to make Fitzgerald pay for his transgressions—God’s will carrying him to see it through.

The action is nicely segmented between Glass’s journey, Henry and his men returning to camp, Fitzgerald and young Jim Bridger (Will Poulter) catching up after leaving their post by Hugh’s side, and the Ree tracking whatever white-faced men they can. At times the expansive views of Canada—doubling for the Montana frontier Hugh Glass actually traveled two centuries ago—call to mind Terrence Malick‘s elegies. DiCaprio’s fever dreams of disjointed flashbacks and disembodied voices assist this aesthetic comparison as spiritualism enters the story to help him endure the pain. It provides us memorable moments we won’t soon forget as beauty seeks to breakthrough the subject matter’s unrelenting barbarity. Shots straight into the sky through a canopy of trees juxtapose with burning embers of campfires and metal against flesh.

My sole criticism is that the film is brutal to the point of tedium. I applaud the authenticity and sheer depravity of it all, but we can only watch Glass beat up and tossed around so often before becoming numb to the suspense. We know the endgame is revenge and that the object of retribution is safe at camp awaiting his monetary compensation, so it’s tough to truly embrace that level of hardship knowing its build-up is merely step one. If the film’s point was seeing Glass survive, we could become invested in the carnage and uncertainty of the outcome. But there’s no way he doesn’t at least get the opportunity to confront Fitzgerald at some point. And until that reunion the rest is more or less filler.

With that said, I’m not sure what to cut in order to streamline things when each vignette of torture proves a harrowing example of his destiny. The amount of suffering also bolsters DiCaprio’s transcendent performance as his grimaces and ferocity replace dialogue. His ability to stand on two feet after what the bear did is a miracle and we see the effort necessary to do so on every movement no matter how small. There’s a wild, feral quality to his eyes as he crawls or hobbles against the pain to make friends, save lives, and ultimately work towards avenging the loss of his family at the hands of men like him who somehow believe they are owed what it is they have stolen.

Making his Hugh Glass a man with Pawnee connections renders each scene with Native Americans that much more electric. It isn’t as easy as trappers versus Indians—for him there’s still the sanctity of being human. Gleeson and Poulter mirror this but with much less intensity as Hardy matches DiCaprio’s unhinged rage on the opposite end of the spectrum. They are both motivated by selfish gains but one is steeped in a moral quest while the other is not. Pitted against each other they are willing to do whatever it takes; the life they’ve led in the wilderness positioning them to overcome more physical and emotion duress than any man should ever endure. Iñárritu educates with cruelty the fact that America has always been bathed in blood.