Review: The Possession Of Hannah Grace [2018] 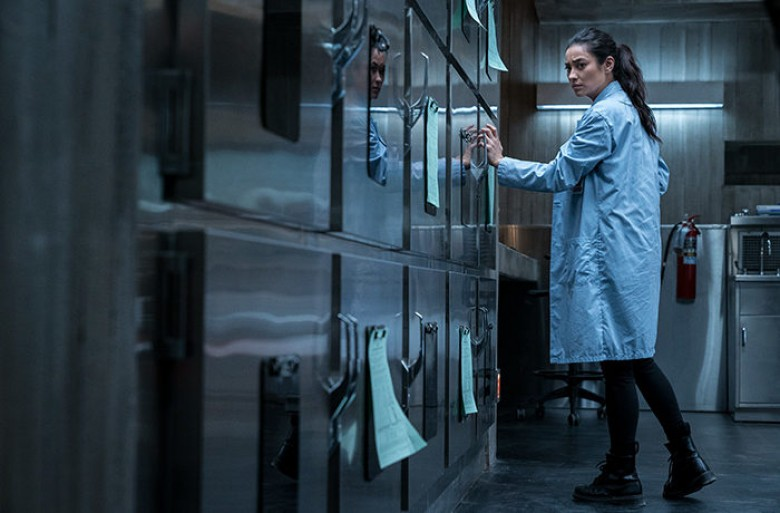 Megan (Shay Mitchell) realizes that something is not right in Hanna Grace’s cadaver drawer in Screen Gems’ THE POSSESSION OF HANNAH GRACE. PHOTO BY: Claire Folger. ©2018 CTMG, Inc. All…
- Share this page -

Megan Reed (Shay Mitchell) is so intentionally drawn for the plot of The Possession of Hannah Grace that you can take bets before sitting down on whether she’ll prove the hero (itching for redemption as a former cop who froze when her partner was shot and killed in the field) or future host of the demon wreaking havoc in the morgue (her partner’s death has left her a shattered and anxious recovering addict who’s obviously susceptible to the darkness she hopes to shed). This duality is where director Diederik Van Rooijen and screenwriter Brian Sieve focus, positioning their lead to relive the exact same situation that sent her life into a free fall. While this obviously won’t happen until the end, even she has to realize it’s coming.

So the eighty or so minutes separating a prologue exorcism gone horrible wrong (Kirby Johnson‘s Hannah Grace ultimately being killed by her father after she impales a priest with relish) and the culmination of events occurring to Megan three months later become filled with what the filmmakers want to be dread. It never quite gets there, though, thanks to the premise being bottled up in one locale with little spontaneity. Once Hannah’s body is brought in (burnt, twisted, and full of deep lacerations despite no signs of composition after so much time has passed), we simply wait until she escapes her drawer and seeks victims to build her strength. An aggressive stranger (Louis Herthum) eventually arrives with malicious intent and Megan becomes caught between demons, imaginary and real.

The secondary characters are quickly exposed as prey once their utility to Megan runs its course. Whether it’s security guard Dave (Maximillian McNamara), NA sponsor Lisa (Stana Katic), or kindly EMT with a conveniently similar backstory in an attempt to manufacture a connection there’s simply no time to cement (Nick Thune‘s Randy), each reminds our lead of her shortcomings and resilience before heading to the chopping block to test her mettle as far as bending or breaking is concerned. Is Megan hallucinating what’s happening courtesy of pills she “borrowed” from cop ex-boyfriend Andrew (Grey Damon) like everyone thinks? Or will she be able to prove to the rest that what’s happening can only be explained by the unexplainable? It’s a shame I was never hooked enough to care.

It’s all too repetitive to really invest. The lambs are quite literally led to slaughter and for some reason the demon within Hannah has deemed Megan off-limits until the script runs its course with the others and has no choice but to turn its ire her way. Sieve and Van Rooijen could have at least let Hannah try to harm this newly hired after-hours morgue assistant rather than completely ignore her to pad the runtime. One character even brings up the inexplicability of Megan not being touched and yet nothing comes of the observation. We infer it’s because the demon wants her as a host, but that’s proven unlikely as soon as its first kill begins to heal Hannah’s destroyed body. I guess it’s just a picky eater.

You can say it’s because Megan is needed as a smokescreen (let her live to unwittingly open doors and facilitate other deaths), but that only proves how deliberate the plot’s strings were strung. The filmmakers appear to have created their endgame showdown and worked backwards to guarantee it happens. They give Megan a tragic backstory and serendipitously push her with flimsy psychology towards a thankless job that just happens to be a setting where Hannah’s body could feasibly turn up. They ensure it’s a solitary position to leave her on an island, set strict occupational rules for her to break, and very deliberately lead their antagonist through a series of meticulously designed pylons of human shaped food for entertainment. It’s factory-line horror as predictable as it is bland.

Megan’s police career gone bust has purpose as far as motivations go. Andrew remaining on the force is crucial towards discovering certain information. Randy must be working alone this specific evening to start things heading south, a bottle of pills have to be left out for prying eyes to see, and the demon has to be able to forget how powerful its telekinetic powers are in order to prolong the inevitable. I’d like to believe these story conveniences can be blamed on budgetary constraints forcing things to stay confined in a hospital basement because I would rather say the filmmakers did their best to render things naturally under such constraints than wonder why they played everything so very safe. Either way they deliver nothing new to the genre.

There are frankly too many demonic possession films on the market for something this familiar to earn a wide release. Hollywood should bankroll projects that risk crashing and burning because at least then we’d be talking about it. Make something divisive, insane, or utterly implausible because having audiences roll their eyes or shake their heads is a success when compared to the yawns of indifference The Possession of Hannah Gracecoaxed from me. The acting is fine, the production value polished, and the special effects good, but none of that is going to make me ever talk about the finished work after tonight. Maybe the goal to make twenty million off a ten million dollar budget will be achieved, but that exchange of money is all we’ll remember.