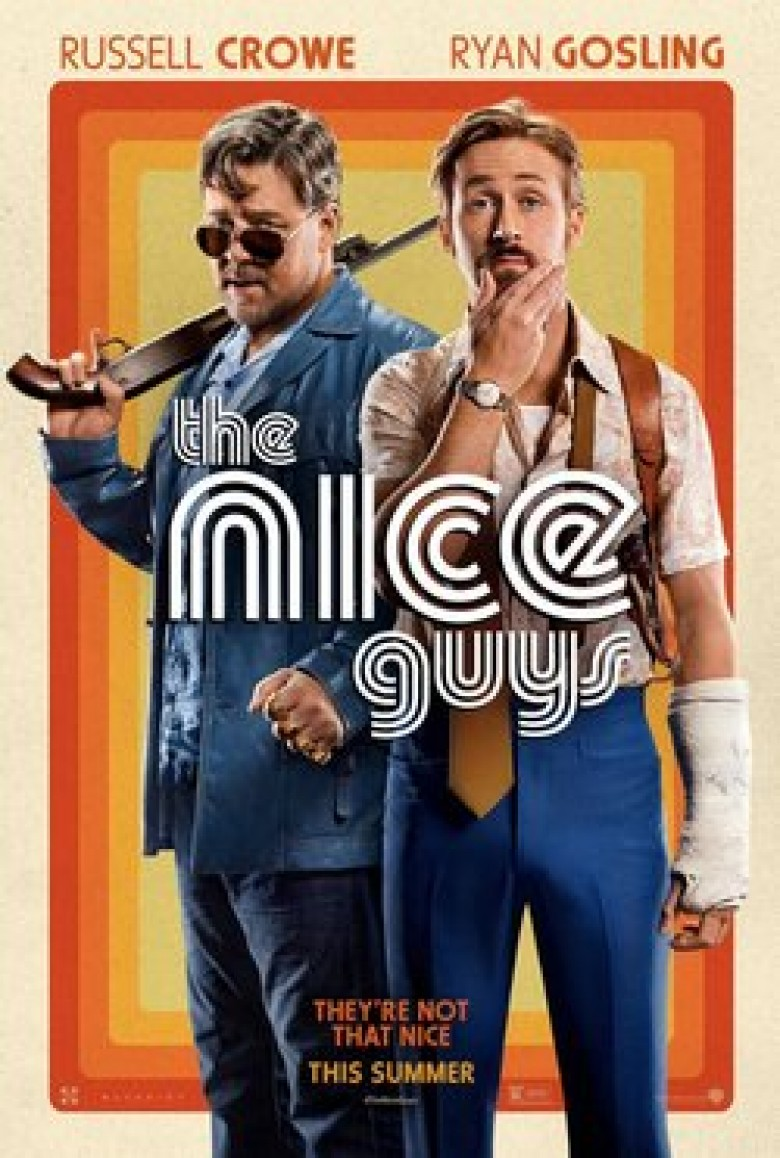 Even a huge Shane Black fan like myself won’t necessarily tell you his style has nuance. You watch his directorial debut Kiss Kiss Bang Bang (released almost a decade after his previous screenwriting credit) and you feel its kinship to his scripting debut Lethal Weapon. His most recent assignment behind the camera Iron Man 3 feels exactly like both despite being entrenched inside an over-arching universe micro-managed by an outside force. So watching the trailer for his latest The Nice Guys is like seeing an old friend dressed in period aesthetic. Sitting down to actually see the whole thing, however, exposes how Black may have hit the well’s bottom. It might be a welcome change that his next two projects are adaptations rather than original works.

Even so, beyond this sense of familiarity, (Lethal Weapon‘s plot was about two loners with very differing personas teaming up to solve a murder that arrives via a cold open prologue’s naked woman as victim, right?), is still a ride that I’d gladly revisit because it’s a ton of fun. The formula obviously works with audiences since Black is currently engaged in the most consistent period of work his career has ever seen. And let’s face it, many of the twenty-somethings who will buy tickets opening weekend have probably never seen his 1987 calling card to notice the similarities. They’re going because they want to watch Ryan Gosling act the fool opposite Russell Crowe the bad ass. Black simply delivers an archetypal comic actioner like few others.

Whereas the past also held his work within the genre as intelligent neo noir, The Nice Guys is a bit of a departure with the decision to embrace implausibility while sweeping consequences under the rug. This go-round through the streets of 1977 Los Angeles renders the joke paramount and we are made to understand this fact straight away after a massive car crash occurs through young Bobby’s (Ty Simpkins) house with an aftermath that leaves the boy staring at the bloody, big-bosomed corpse of the same porn star he had just been ogling on the centerfold of his father’s nudie magazine. The incident is so surreal that you want to believe it’s fake—some movie magic before a fictional director yells, “Cut!” Nope, it’s real.

Real enough so that bodies literally start falling from the sky as a result of the fallout that will soon embroil private detective Holland March (Gosling) and for-hire bruiser Jackson Healy (Crowe) in the carnage. The dead porn star (Murielle Telio‘s Misty Mountains) was just the tip of an iceberg and person of interest/missing girl Amelia (Margaret Qually) is everything below the surface. It’s a coincidence March is even looking for this girl and therefore a coincidence Healy and he cross paths, but that doesn’t mean they don’t feel the need to see the case through. Or at least it doesn’t for Healy. March is a bit of a depressive drunk (with reason) whose thirteen-year old daughter Holly (Angourie Rice) kicks into action more than once.

The adventure is extra pulpy with bouts of hallucination (Hannibal Buress plays a giant killer bee, one of many environmental issues somehow circled back upon as more than hippy flavor), murder as comedy (there are two incidents of innocent bystanders taking stray bullets for comedy that Black quickly ignores without a second thought), and impossible bouts of destiny placing the object of a chase in the crosshairs of its pursuer simply because the runtime is already too long and things need to be sped along. Thankfully March and Healy are written so broadly tongue-in-cheek that they constantly make note of the serendipitous nature of their pursuit. The latter uses skepticism to question their luck, the former idiotic blind trust and a false sense of invincibility.

What we believe the case to be is far from its full scope and the web of deceit and complexity expands wider and wider as Detroit heavies (Keith David and Beau Knapp), DOJ director Kutner (Kim Basinger), and a cold-blooded hitman (Matt Bomer) enter the fray. Every time we think things have finally been revealed it all ends up deflection and lies. Amelia comes and goes like a ghost trailing bullets and unnecessary chaos for Healy, March, and his daughter willingly swimming in her wake to catch and every lead turns up dead—dead dead, not a trail run cold. Porn, automobiles, and dying birds choking on smog become plot points and you wonder what was going through Black’s mind to craft the wild leaps connecting things together.

It leads to the first hour delivering some of the most unadulterated entertainment I’ve seen at the movies in quite a while. Gosling and Crowe’s rapport is hilarious, the villainy oozes cartoonish insanity (Who throws fish?), and the sheer fact March survives the numerous pratfalls his alcoholism provides makes you wonder if he is a superhero—or if any of what we see is actually happening. I say that jokingly but it might be a relevant question once you step back and look at the whole along with the vantage point each sequence begins from (both Crowe and Gosling narrate at times). But even as everything goes zany enough to make these “tough guys” turn and run the other way, there’s a surprising number of genre surprises too.

With at least one surprising death mainstream Hollywood generally avoids, I’d say The Nice Guys has an over-arching cynicism that goes directly against what most believe a film like this provides. You want Healy to be the hero he craves to become, but it’s hard to discount the unyielding pessimism March holds as gospel. Visible far beneath the surface, these character traits unfortunately only color the theatrics rather than propel the plot. In all honesty, the plot happens to them with or without their help. This is why it starts dragging two-thirds of the way through: Black and cowriter Anthony Bagarozzi refuse to let them stop. It’s not that the characters have unfinished business, the filmmakers do. What ensues is highly enjoyable, but far from a natural progression.