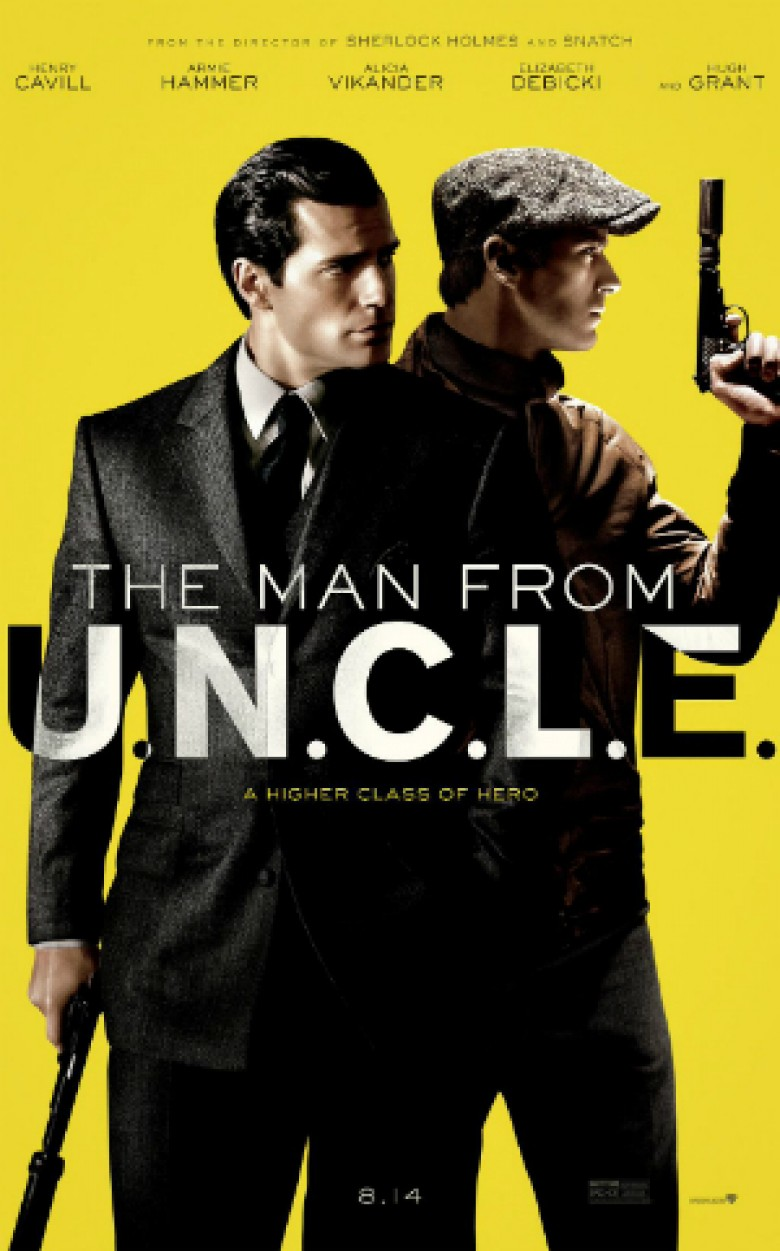 “Inside every Kraut is an American trying to get out”

Writer/director Guy Ritchie is like that band all my friends dismiss because they think every song in their discography sounds the same to which I reply, “But I like that song.” With the exception of Swept Away—because I’ve never seen any reason to actually watch it—I’ve enjoyed all of the high-octane, visually kinetic action comedies he’s brought forth into this world. Whether an original Cockney tale like his earlier work or a Hollywood property adapted to his sensibilities of late, you can’t help but love or hate the whole package. His latest The Man from U.N.C.L.E. is no different and perfectly suited to his humor and frenetic cuts and wipes. Forget how the television show revamp went through a reported fourteen scripts in twenty years and half that number of directors because it’s definitely Ritchie’s now.

It was very close to being made with regular Steven Soderbergh collaborators Scott Z. Burns on script and George Clooney in the lead, but the director balked at the studio’s balk about him needing more than sixty million to get the 1960s-era look down pat. Currently listed at seventy-five, I wonder how much Soderbergh needed to see his vision to fruition. It surely would have been different from what Ritchie and Lionel Wigram have delivered because Steven’s never gone full-bore into Guy’s comedic wheelhouse even at the Oceans’ zaniest. There’s something about the winking cheese of secret agents here that feels as vintage as the property it’s based on. And I can’t imagine anyone else hamming it up as Napoleon Solo better than Henry Cavill. The guy excels at performing atop the line between real and caricature.

Ritchie’s extended opening sequence tailing Cavill’s Solo shows as much, watching him seek out Gaby Teller (Alicia Vikander) to coyote her over the Berlin Wall and into the CIA’s good graces to assist finding her missing nuclear scientist father rumored to be building a bomb for some very bad people. He’s cool as a cucumber, noticing the KGB agent (Armie Hammer‘s Illya Kuryakin) shadowing him as though an afterthought and treating the discovery of a bug in his suitcase with a dejected sigh before continuing his conversation like men with guns aren’t in the process of surrounding him. It’s an entertaining cat and mouse sequence sped up and cranked down to extremes to witness these men’s brains and brawn. Their destroying a bathroom with fisticuffs is therefore hardly surprising when they next meet as partners.

Yes, in order to stop Italian femme fatale and cold-blooded wielder of genocide Victoria Vinciguerra (Elizabeth Debicki), the CIA and KGB must unite. Solo and Kuryakin become Gaby’s handlers to infiltrate their enemy’s organization and get close enough to her dad (Christian Berkel) to stop him. While Solo pretending to be a thief is the exact opposite of a stretch considering he was quite accomplished at the task before the agency recruited him via blackmail, Kuryakin’s cover as an architect fiancé to Gaby is hardly believable. All he wants to do is bash whatever face is in his path once his short fuse explodes into deafening anger. But that is exactly what the Italians would expect from a man pretending to play a part. So as Solo enjoys his role’s perks, Kuryakin must fight off a temper-induced aneurysm.

Cavill and Hammer’s back and forth rapport is executed well by their performances—the former’s wry smirk and latter’s flared nostrils—and on-screen action. Forever trying to one-up each other in a show of elite skill, patriotism, and ego leads to many funny exchanges and verbal puns the two don’t even try to mask. The highlight of their contrasting personalities, however, comes around halfway through as Cavill’s Solo escapes the crazy scene of bullets and fire inside a boat chase to catch his breath in the cab of a truck with classical music in ear and delicious looking sandwich in hand. We watch as Hammer’s Kuryakin continues circling in the water behind him with Vinciguerra’s vigilant guards in pursuit. It’s carefully meticulous calm versus spur of the moment brute force at its finest.

Not all the style flourishes work flawlessly, though, as Ritchie’s stand-in for his Sherlock imagining moves before acting them is to remove dialogue and/or excise information to leave us in the dark towards whatever reveal occurred before our eyes. The maneuver is more frustrating than anything because it’s not hard to guess what transpired. His then repeating the same sequence with gaps filled proves pandering overkill. Many in the audience also grew restless at the director’s choice for seizure-levels of split-screen transitioning action condensing huge gunfights into short burst Cliff’s Notes rather than extended choreography. I personally didn’t mind it since it meant the next bit of plot would arrive without unnecessary excess in between. It will hurt some people’s vision due to its unrelenting speed, though. Don’t worry: you won’t miss anything important by closing your eyes.

The stuff that matters comes in the quieter moments of fluctuating character dynamics, double-crosses, and newfound respect/hatred depending on the target. Cavill’s Solo takes nothing seriously and Hammer’s Kuryakin everything with Vikander’s Gaby the mother hen keeping them in line. CIA boss Sanders (Jared Harris) and his KGB counterpart Oleg (Misha Kuznetsov) do little besides force their men into partnership and Debicki’s Vinciguerra is hollow of substance besides stock villainy, but Hugh Grant’s Waverly provides nice bits of comic relief when poking the two secret agents every chance he gets. While you’ve seen the main mystery countless times before and the evolving motivations of the leads are obvious, if you let the fun takeover you’ll be in for a treat of glamour, wit, and excitement. The Man from U.N.C.L.E.‘s script simply services those goals for summer popcorn escape.