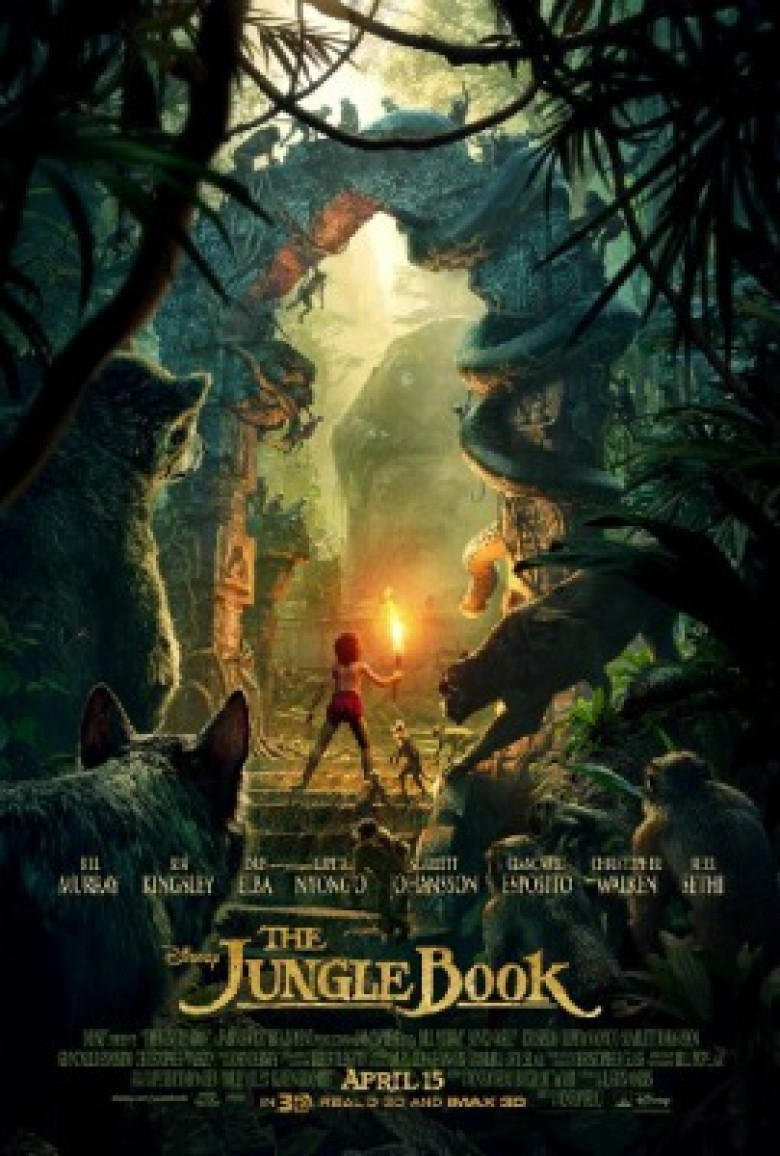 Looking back at Disney’s 1967 adaptation of Rudyard Kipling‘s The Jungle Bookobjectively may surprise you as it’s little more than a sing-a-long loosely tied into a low-stakes adventure of escape from the big bad jungle that’s ultimately portrayed as sympathetic if still dangerous. Anyone over eight will be bored by its lack of substance and tired of its silly humor—Shere Khan’s menace providing the sole bit of resonant impact beyond its frivolity. So it’s not difficult to see why Justin Markswould skew darker half a century later sans Walt Disney‘s watchful eye over his shoulder. I don’t know if he dug out Bill Peet‘s original discarded script, but he definitely conjures the violent tone of power born from the wild that shelved it.

He also rectifies three main issues I have with the cartoon: its lack of stakes, mostly irrelevant characters, and ham-fisted conclusion that more-or-less demeans the journey. For the first he introduces two deaths to drive the hatred Shere Khan (Idris Elba) possesses for Mowgli (Neel Sethi)—one from the past and another of the present to conjure true fear in the herd and a visceral sense of vengeance in the outcast being lured back home. It’s no longer just jungle hierarchy or a random chase leaving the villain off-screen for half the film. This battle can only end in more death as good or evil will perish so the other can survive. Rather than with an ambush, their convergence proves a final stand for courage, individuality, and love.

Marks rectifies the second point of contention by providing each animal a purpose. The elephants, for instance, are no longer comic relief playing on the myth of steel-trap memories. Instead they’re held as regal creatures—the jungle’s creators—of which you bow down to in respect upon crossing paths. They do not speak; they only act, purposefully. And they allow for a wonderfully poignant moment to show the audience, Baloo the Bear (Bill Murray), and Bagheera the Panther (Ben Kingsley) just what Mowgli is made of beyond man’s genetic coding and wolf mother Raksha’s (Lupita Nyong’o) nurturing. These elephants are a crucial part of the jungle’s ecosystem like everyone else. There are ancient laws to abide by and Shere Khan’s tiger refusing to do so has consequences.

I’ll let the film’s natural evolution—that more closely resembles The Lion King than its own animated predecessor—speak for itself where the third issue is concerned. Let’s just say the ending is more authentic and less abrupt, its message of family beyond surface appearances trumping any shoehorned romanticism making no sense to the bigger picture. This is possible because Marks takes pains to ensure the relationships built are strong due to their being developed over time rather than minutes. We watch Mowgli with wolf Mom (Raksha), Dad (Giancarlo Esposito‘s Akela), and sibling cubs. We see how much they love him, understand his differences despite still being accepted by the community, and witness his burgeoning evolution into a creature able to embrace the best of both his worlds.

Bagheera takes an active role, admitting he raised the boy rather than pretending to have left him on the wolves’ doorstep without explanation. Baloo spends weeks with Mowgli under his wing rather than hours with Bagheera’s wellbeing shadowed in doubt after an early tussle with the tiger. Even Kaa the Snake (Scarlett Johansson) possesses newfound substance. She’s now key to sharing exposition about the past as well as provide a better avenue for introducing Baloo without relying so heavily on the panther to continuously save the day. Marks’ plot is simply tighter and more coherent while progressing towards its earned conflict. Even the “red flower” of man (fire) holds greater importance than King Louie’s (Christopher Walken) reason for randomly kidnapping Mowgli so one more song can be injected.

Director Jon Favreau‘s decision to include “I Wan’na Be Like You” and “The Bear Necessities” is odd since the other musical callbacks are done with spoken word and score cues, but you can’t deny their desire to add flavor to an otherwise dramatic tale that may be too dark for the original’s target audience. Baloo’s jingle is perfectly suited to a fun montage of he and Mowgli gathering honey as friends while King Louie’s melody is transformed into a deep, slow chant throwing shivers down your spine. Favreau refuses to put a lighter spin on the project because this danger is crucial to Mowgli’s motivations. Does he remain in the jungle or embrace man? Are the wolves truly his “people” or were they just all he knew?

This is the biggest difference and best improvement upon Disney’s classic. There’s a grey area to the wolves letting Mowgli go now and Shere Khan’s evil is rooted in malice rather than pure animalistic nature that didn’t make sense considering the panther shared no predatory bloodlust. Mowgli faces a real existential struggle as he discovers what it is to be a man without fear of becoming exactly what the jungle believes he might. They bottle up his ingenuity thinking it will breed destruction and fire, but his creativity and imagination is actually something he can use to preserve their safety. Suddenly The Jungle Book is no longer about a boy out-growing the jungle’s magic. It’s an allegory about finding peace and harmony where history had only seen war.

It’s a gorgeous work of visual art too. So little of what’s onscreen is real as Favreau takes Life of Pi‘s groundbreaking technology to create living, breathing, talking characters without a single misstep. Their interactions with each other are seamless, but Sethi’s are too. His hands ruffling fur or body suffocating by snake coil feels real. The animals also deliver natural performances, more so than the boy. It was an impossible situation for him, though—his first major role being on a soundstage opposite nothing. It’s no wonder he over-acts. I probably wouldn’t have noticed as much except for this version being so dark and weighty. To see Bagheera, Raksha, and Baloo’s binary eyes omit such emotion puts the onus on Sethi to keep up. He sadly cannot.