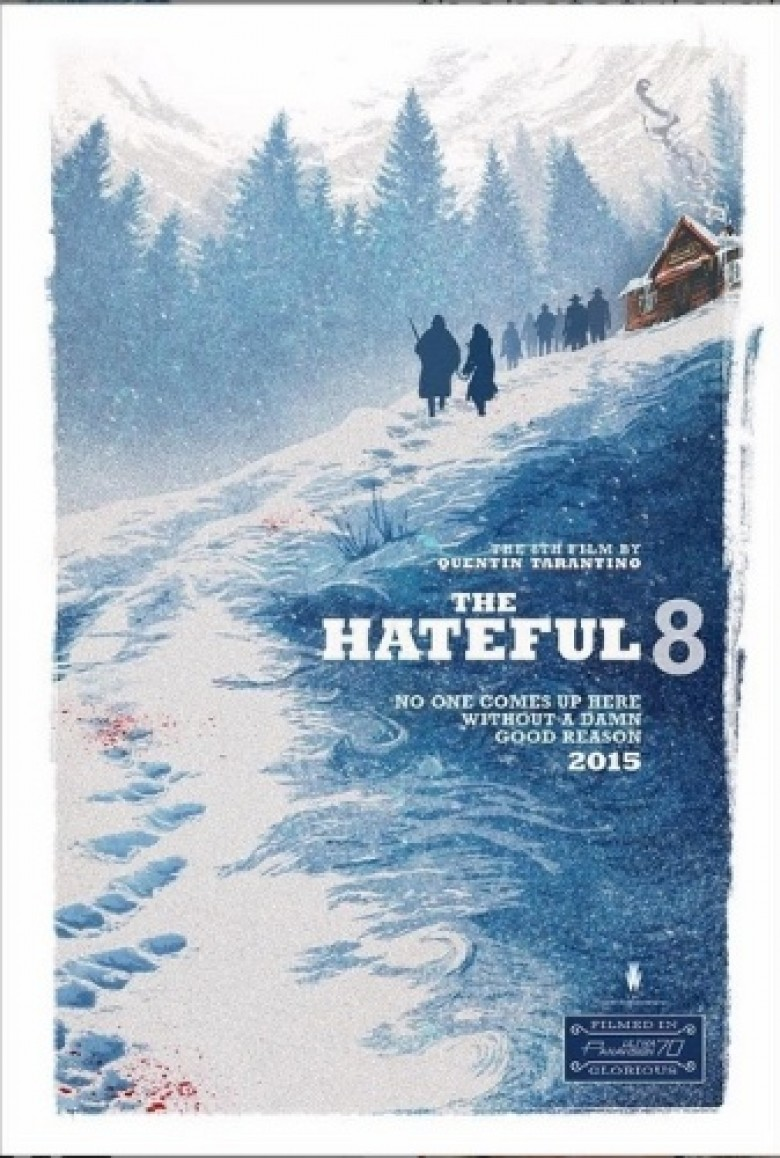 It appears Quentin Tarantino has decided to go back to his roots by making his eighth feature film The Hateful Eight in the same vein as his debut Reservoir Dogs—namely keeping sets and actors to the bare minimum for added tension without room for escape. The maneuver couldn’t have come sooner with its predecessor Django Unchained, despite earning an Oscar for Best Original Screenplay, proving to me his weakest work. Not only was it pretty much a watered-down rehash of Inglourious Basterds, it was also a bit of a slog with good laughs separated by longer lulls. In desperate need to scale things back to the down and dirty, fast-paced, dialogue-driven masterworks he built his name upon, he wonderfully found a way to do exactly that.

What’s crazy is how it was almost shelved after the auteur’s infamous meltdown when an initial draft sent to six people—as the story goes—ended up plastered on the internet for the world to see. Supposedly an actor gave it to his agent and that agent set it free. Tarantino called out CAA, they denied it, and he ultimately boasted that he had ten more scripts in his back pocket to choose from. He’d publish this one as a novel, his ego too large to give the world something it stabbed him in the back for until enough time passed and/or sense prevailed to change the ending and bring it back to life. I get why he was pissed: it’s a perfect entry to his oeuvre.

Starting with Ennio Morricone‘s western score pumping through the speakers, Robert Richardson‘s lens focuses upon a wood-carved Jesus Christ crucified and looming above the snow-covered mountainside of Wyoming. After a few quietly serene images flutter past it’s this statuary that we can’t help but intently examine next to cast and crew names, its Christ held forever in frame with a subtle yet meticulously measured rising crane shifting our vantage point to capture O.B. Jackson’s (James Parks) six-horse-drawn carriage approaching from the background into our laps around the bend. The passengers are headed to Minnie’s Haberdashery, a small makeshift inn halfway between where they’re coming from and their Red Rock destination. They hope the establishment will serve as a reprieve from the gaining blizzard threatening to kill them all.

If you’ve seen the trailers you know O.B.’s customer is John “The Hangman” Ruth (Kurt Russell), he with Daisy Domergue (Jennifer Jason Leigh) chained to his wrist. She’s wanted dead or alive, but he’s a man of principle and the justice system—a man who enjoys watching his bounties wriggle around until their last breathe is expelled. The journey was meant to be private and yet it proves anything but. First they come across Major Marquis Warren (Samuel L. Jackson), another bounty hunter to which Ruth is familiar with his own frozen criminals awaiting a Red Rock coffin. Second is low-life Confederate sympathizer Chris Mannix (Walton Goggins). Ruth is nothing if not a cautious man and these two get his wheels turning about a potential ambush.

So, arriving at Minnie’s to find four more strangers already warming up by the fire makes matters ever more precarious. They include the Haberdashery’s substitute innkeeper “Señor” Bob (Demian Bichir); British hangman awaiting poor Daisy’s verdict, Oswaldo Mobray (Tim Roth); mysterious cowboy Joe Gage (Michael Madsen) on the way to visit his mother; and Confederate General Sandy Smithers (Bruce Dern) seeking refuge from the elements on the journey north to bury his son Chester Charles. They each have the requisite paperwork or verbal proof to appear to be whom they claim, but they’re outsiders when compared to Warren and Mannix. Those two men have faces of which Ruth personally knows, although he can hardly trust them regardless. The bell sounds and the games begin.

What follows is broken into chapters with an intermission around halfway through—a leftover from the roadshow “event” that select cities are receiving to experience it in glorious 70mm. The print I viewed merely saw an extra ten seconds or so between the end of one vignette and the start of another with Tarantino narrating a brief recap of the events just witnessed. What’s great about this divide is his creating a similar tonal shift like between the two halves of Kill Bill. Where its Part 1 was action-packed kinetic and Part 2 somber drama, however, The Hateful Eight goes the opposite direction. The initial 90 minutes supplies talky exposition as each character sizes the others up and the concluding 90 a non-stop bloodbath of epic proportions.

There’s also the exciting artistic decision to start playing with time. What began a straightforward tale moving from point A to B completely isolated from anything outside the four walls we come to know so well suddenly rewinds to replay Act 1’s final scene from a different angle. Tarantino also delivers a sort of expansion pack to the world surrounding John Ruth and Daisy Domergue with the cast list of co-stars finally making sense as everything thus far is flipped on its head. This change isn’t out-of-nowhere either. Pay close attention and you’ll see tiny details somewhat askew despite our not having the faintest idea how. Jackson’s name doesn’t appear first in the credits for no reason—he knows Minnie’s and something isn’t right.

I’d liken this graphic dance of gunshots to the board game “Clue” with its myriad suspects and weapons hiding just out of plain sight. Information such as why Daisy is worth a ten thousand dollars bounty isn’t necessary at first to understand her being the prize in the situation, but it is once we’re made privy to the truth. Important props like a pen pal letter from President Lincoln can find its meaning changing uses at the drop of a hat. There’s also a ton of bad blood in play considering Warren wears his Union Calvary outfit opposite Smither’s Confederate greys, but it’s ultimately whoever has the guns or poison or knife that garners the upper hand. And control of the situation isn’t so easy to wield.

Everyone down the line embraces their roles—some deftly bringing two to life with identity and façade alternating depending where we are in the story. Even Channing Tatum in a highly publicized cameo (he bombarded Tarantino with emails begging to get cast) earns his keep opposite some Hollywood greats. Russell is a tough-as-nails SOB you love to hate, Roth a deliciously smarmy Euro elite amongst Southern drawls, and Goggins a scene-stealer doing his usual I’m-smarter-than-you-think hick shtick with aplomb. Jackson may be the star with his efficient anger and know-how giving him that aforementioned control more often than not, but never count Leigh out. She’s the most complex, devious, and crazy of them all. She’s why you kill your Dead of Alive bounty the first chance you get.