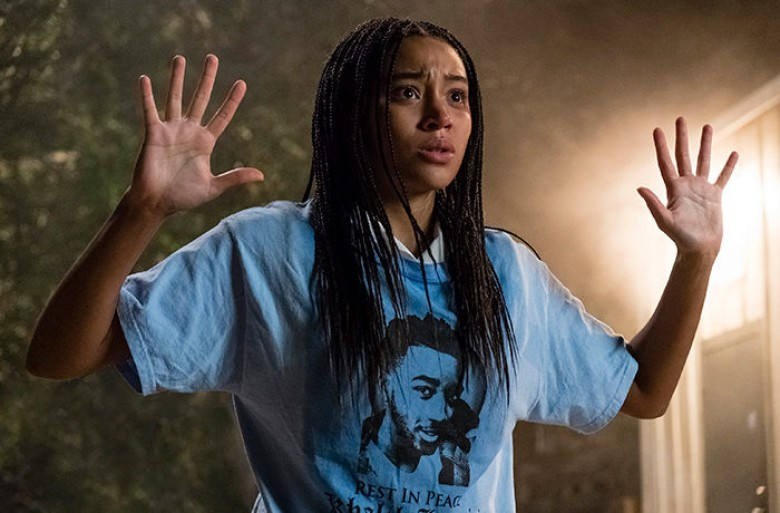 The progression of The Hate U Give‘s genesis reveals its message’s importance. Angie Thomas began its short story precursor back in college as a response to Oscar Grant’s 2009 death by police. She would push it aside soon after in hopes to revisit the subject matter once her rage subsided. Her impulse was to instead find the love necessary to put everything she wanted to say down correctly—something the film adaptation (in theaters less than two years after the novel’s publication) possesses to create an authentic balance between emotions. This doesn’t mean the anger isn’t still very prevalent, though, since it was Trayvon Martin, Mike Brown, Tamir Rice, and too many more adding to Grant’s and ultimately Emmett Till’s legacy that brought her back to the project.

Nothing gets to the heart of this duality better than George Tillman Jr.‘s opening scene as adapted by the late Audrey Wells. While the whole crux of the material revolves around Starr Carter (Amandla Stenberg) manufacturing two different identities depending upon whether she’s at home in Garden Heights with dealers, drugs, and guns or her private school Williamson with white privilege, cultural appropriation, and blind naiveté, that impetus is rooted in comfort rather than survival. She wants to not be too “white” for old friends and family and not too “black” for new friends. She wants to be included rather than “the other” and therefore sacrifices a part of herself in the process. That’s its own form of privilege, one strangers will soon prove is smoke and mirrors.

Because beneath those carefully constructed veneers is a young black woman who must reconcile a justified anger towards external forces against the yearning for love and understanding. So before teenage Starr can traverse these worlds and discover the wide expanse between them, Tillman Jr. presents a scene at once too familiar to some and completely unimaginable to others. It’s of a nine-year old Starr and her ten-year old half brother Seven seated at a table with baby Sekani in Mom’s (Regina Hall‘s Lisa) arms and Dad’s (Russell Hornsby‘s Mav) stern severity glaring down with calm but firm instructions. He explains what to do when confronted by a police officer not as a means to comply with the law or show respect, but to survive the inevitable encounter altogether.

It’s heartbreaking to endure because no child should have to deal with something so dramatic. No pre-teen should be ravaged by the worry and anxiety supplied by the knowledge a cop will probably shoot first and ask questions later if he/she thought a toy in your hand was a weapon. But this is our world. This scene isn’t some made-up propaganda trip pulling at heartstrings. It’s a ubiquitous moment in households across the country and beyond that “All Lives Matter” types dismiss sight unseen because they can’t fathom having to sit their own children down for that same talk. And it’s exactly because they can’t imagine the rage-fueled fear going through a parent’s mind in such a profound moment that a film like this demands them to watch.

That’s not all either. Mav also passes out copies of the Black Panthers’ Ten-Point Program for self-defense with an imperative to memorize every word. This isn’t indoctrination or a radical incendiary imploring his children become rebels. This is another act of self-preservation in order to teach these kids their rights in the face of oppressive forces that will do all they can to scare the agency right out of their grasp. It teaches them the words tattooed on his arm: “Those you live for are those you’ll die for.” Here’s that nexus point of emotion where anger is channeled through love, protection, and unity. A scene that lasts all of five minutes sets the stage for a life dictated by rules those in power never have to follow.

I can think of no more powerful or prescient way to introduce the Carter family. We’ve yet to meet the Star, Seven (Lamar Johnson), and Sekani (TJ Wright) of the present, but we already understand the struggles they’re about to face. Is the narration a bit cheesy with Star calling her parents’ romance her OTP (one true pairing)? You bet. It’s that cheesiness that makes these characters relatable, though. It cuts through the weighty drama looming behind every action they take and helps create a tone wherein the intentional heavy-handedness of the plot feels educational in its overarching themes and wide-reaching scope rather than suffocating in hollow preachiness. A lot is about to happen above and below the surface and it’s crucial that we pay attention.

Things can get unwieldy and repetitive (Tupac Shakur’s “THUG LIFE” is defined multiple times to drive its meaning home), but that’s a legitimate educational tactic. Scenes like Starr calling her friend Hailey (Sabrina Carpenter) out for institutional racism aren’t necessarily handled with nuance when Stepford Blonde leans into overt racism to prove the film’s point, but a payoff with the former forcing the latter to experience what she endures each and every day is unforgettably pointed. The same goes for a depiction of detectives spinning their questions at Starr’s witness to defend Khalil’s (Algee Smith) traffic stop murder before eventually having her cop uncle (Common‘s Carlos) swoop in with a hug. It’s purposefully over-the-top to set-up a damning moment of clarity between the two family members much later.

This is how the story is constructed. It presents details in an almost artificial way to ensure we take note for when their relevance arrives with its required power. Things like Starr and Seven going to a private school because of a tragedy involving her friend years ago are all but glossed over until the time is right to use them with intent. For every sloppy but emotional scene like activist April Ofrah (Issa Rae) riling up funeral attendees before being surprised when her call for peaceful protesting falls on deaf ears comes a complexly rendered one that makes us think about what truly matters in any given moment. It’s not a coincidence that Tillman Jr. depicts Khalil’s murderer (Drew Starkey) as remorseful upon recognizing what he’s done.

What does that remorse mean? Does it exonerate him or prove the failings of police training? Does the humanity it provides actually acknowledge how even he knows the act was a crime and thus should be punishable? The Hate U Give isn’t therefore supplying answers as much as presenting the questions in their true-to-life situations for us to confront. It shows the violence, coercion, and double-talk on both sides. But while one race has the option of picking themselves up and leaving, the other doesn’t. And having the real honest to goodness love that the Carters share isn’t enough to combat that disparity. Love and optimism won’t bring Khalil back. The anger society teaches us to fear is still a necessary weapon with which to finally be heard.

The film also shows the myriad directions one act can spawn. It shows the system that keeps citizens of Garden Heights down as well as the one that isolates those at Williamson. It shows the animosity good people like the Carters face on both sides of the racial coin with Mav’s former gang boss (Anthony Mackie‘s King) looming with murderous intent. This family is literally stuck between a rock and a hard place, destined to choose a lesser of two evils rather than simply live. Stenberg and Hall embody this war from the side skewing closer to fabricated safety while Hornsby remains grounded in his blackness with the strength to back-up an optimistic outlook for change. He epitomizes this rage-love symbiosis, empowering Starr (and us) to stand-up for something bigger than herself.