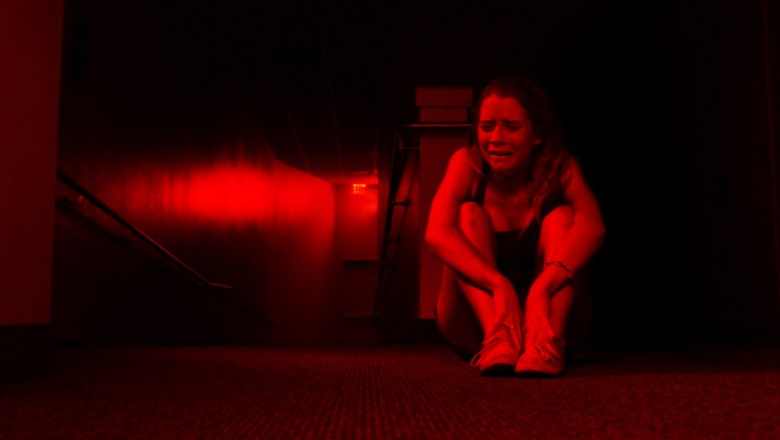 Something doesn’t add up. It does if coincidence is the name of the game (and it is), but that doesn’t make it plausible to accept any revelations Travis Cluff and Chris Lofing deliver in Act III of The Gallows. It’s not ruining anything to say a main character is the kid of a classmate of deceased teen Charlie who died during a high school play in 1993. The filmmakers meticulously ensure we know there are twenty years between that performance and the current one, which means little considering this kid’s parents could have had their child years after graduation. Ah, but could they have when considering something I cannot explain without divulging a major spoiler? Long story short: two principals in this film are more than likely nineteen. Maybe they both started Kindergarten late?

I’ve probably said too much despite not expressly giving specific details, but it honestly doesn’t matter. I was actually enjoying what was onscreen until its twist revelations came and derailed all good will due to the laziness of their asinine connections. Charlie’s death was not malicious and his ghost has no cause to seek revenge other than an immature sense of placing blame where there is none. So his desire to come back and kill is flimsy at best, especially considering he hadn’t done so in the two decades previous. And that’s okay because completely random murders are more believable than the carefully hatched plans looming at the back of The Gallows‘ plot. I can get behind senselessness to simply watch effective scares. I cannot forgive poor attempts to force meaning through clunky contrivance.

While many people seem to detest found footage films, I’ve conversely enjoyed a fair share of what I’ve seen.Blair Witch Project is a classic, Trollhunter is a ton of fun, and even The Fourth Kind had me on edge more than I probably should admit. Cluff, Lofing, and cinematographer Edd Lukas do a good job with the aesthetic both in their comedic appetizer and jump scare-heavy main course. Making the “monster” a hangman with noose in hand really amps things up visually because the effect of seeing people flying across the room by their neck at any moment is quite jarring. Shrouding it in pitch-blackness with only the bright bulb of a camcorder or night-vision app of a cellphone purposefully keeps us guessing when the next “capture” will occur.

The constant switching of technology works too once football star turned not-so-good thespian Reese (Reese Mishler), wholesome drama geek Pfeifer (Pfeifer Brown), goofball jock videographer Ryan (Ryan Shoos), and his girlfriend Cassidy (Cassidy Gifford) get separated in their school after dark. It makes sense with the conceit that we’re watching police evidence in the aftermath of the deaths we’re watching unfold in real time. So when a character is no longer in frame of one device, he or she is on another since the cameras’ light sources become their only escape from the darkness. Even the reason this quartet is at the school so late works because ruining the play’s set is the only surefire way Reese won’t bomb onstage. It might be a completely misguided and unnecessarily brazen thought, but most teen ideas are. Right?

Where the trouble begins is with Ryan and the filmmakers’ hope he will be the next T.J. Miller from Cloverfield. Sorry, he’s not. To do what Miller did isn’t a small task and this project isn’t strong enough to provide Shoos the basis to run wild. If anything I was annoyed with him early on and didn’t care one bit about what might happen until the hapless victim of his ire (Price T. Morgan‘s “stage boy”) turns the tables for a laugh. Ryan does provide an expendable body, though, as well as a catalyst for Reese to do what conscience rejects. And if all four stars were equally stereotypical plot devices I probably wouldn’t care. Because Reese and Pfeifer’s potential romance quickly draws our focus, however, Ryan and Cassidy pretty much have expiration dates from the start.

In contrast to them, I really enjoyed Brown and Mishler. This Blumhouse production is low budget and the talent obviously projects such as unknown faces trying to break into the industry. They all toe the line between amateurish and effective teen awkwardness, but Reese and Pfeifer are given the space to also turn the switch and become emotionally authentic. I think back to when Ryan goads Reese into saying his lines with conviction (he does). Pfeifer could play Ginnifer Goodwin in flashbacks and she has the same peppy smile so confident in one scene and gone in a flash the next. There’s more than meets the eye with their relationship and it adds intrigue to discover where they’re trajectories lead—sadly it is all based on a truth that sharp minds should instantly reject.

The unfortunate reality of The Gallows is that its creators drew their plot in a way that makes it necessary for them to show their killer’s supernatural glory. Frankly it’s too much. This stuff is effective the simpler it is and that’s why the middle third entertains. The audience was really getting into the cat and mouse chase, the camera tricks causing objects to disappear once off-screen added suspense, and the lack of light got your skin crawling. Once the hangman becomes a part of the physical world, however, the mystery is gone. What follows is a decently creepy yet boringly clichéd reveal that gets ruined by supplying us a laughably unnecessary epilogue. We got it when the final bow was taken. The rest is merely a desperate attempt to position the property for a sequel.