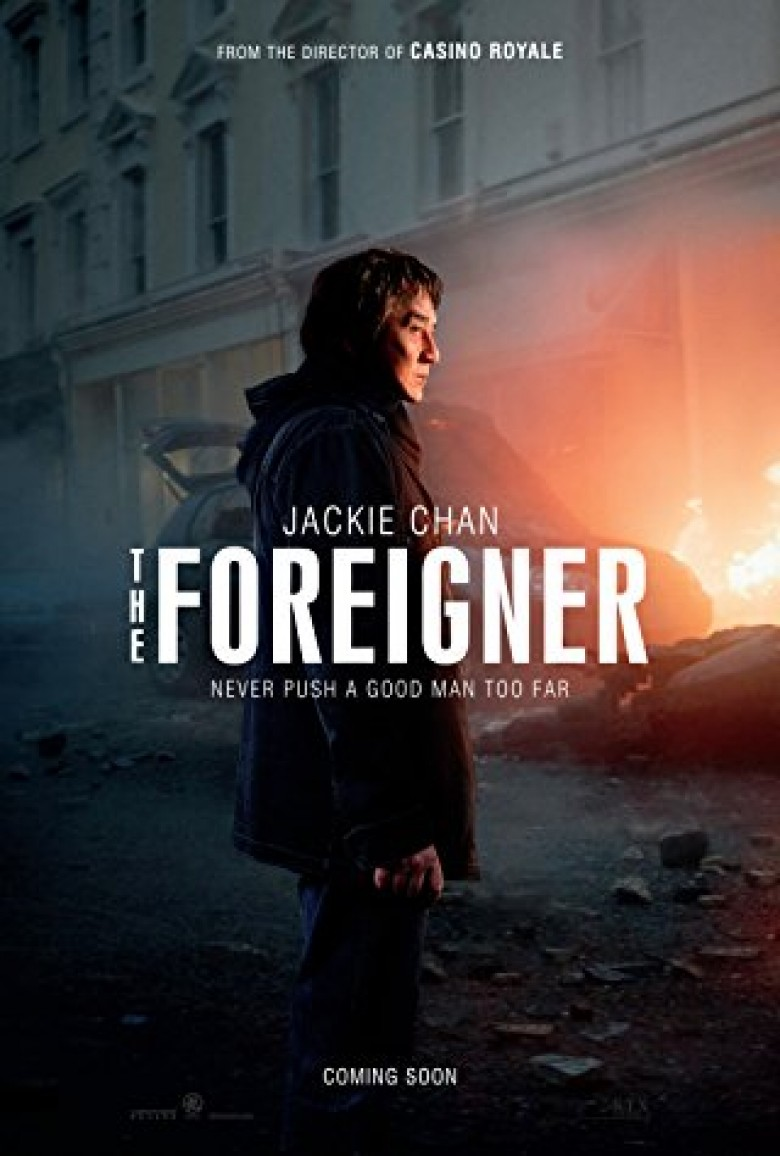 I like a good action thriller without a clear target because it allows the story to develop where cat and mouse chases usually reside. Martin Campbell‘s The Foreigner is a good example as it shows what happens when a sharp plot is made paramount. We know who the bad guys are—a group of young IRA rebels rekindling a fight long since dormant—but not their identities. So distraught dad Quan Ngoc Minh (Jackie Chan) must improvise his quest for vengeance after his daughter is killed in a bank bombing that has Britain and Northern Ireland in a scramble. He stalks the former’s lead officer (Ray Fearon‘s Commander Bromley) for answers until the latter’s political emissary with a militant past (Pierce Brosnan‘s Liam Hennessy) crosses his TV.

Without any leads, England has nothing to offer. Hennessy, however, has his finger on the pulse of a 21st century IRA embracing peace rather than war. If he doesn’t know anything personally, his Rolodex surely holds a name that does. But why would a powerful government figure with ties to an infamous terrorist militia tell a 60-year-old Chinese immigrant what he refuses to tell the country threatening to retaliate with a fury his rough and tumble acquaintances cannot stop? He wouldn’t. And to be honest, Hennessy is just as keen on solving this mystery as the rest because his clout is bound to the retention of amiable relations with Britain. So he pressures the IRA heads and executes a plan to find the traitor in their midst.

David Marconi‘s script (adapted from Stephen Leather‘s novel The Chinaman) isn’t an espionage thriller, though. There’s a lot of that going on with double agents, mistresses, and Special Forces retirees, but action trumps secrets as far as pace is concerned. So rather than let Hennessy’s plan unfold as everyone watches the pieces fall where they may, the filmmakers let their bulldog of a protagonist wreak havoc. Quan has nothing to lose (his daughter was the last family he had) and nowhere else to be. And since Hennessy’s men (led by Michael McElhatton‘s Kavanagh) are always underestimating him, he seems to be everywhere they go. Quan sets bombs and leaves traps to maintain the Irish’s attention. He’ll learn his real targets’ identities by any means necessary.

We therefore have four concurrent plot threads running parallel, with an inevitable convergence at the climax. There’s Quan’s mission to leverage Hennessy’s fear into answers; Hennessy’s desire to leverage the men he believes are on his leash into solving a terrorist resurgence that’s bad for business; Bromley and his boss Katherine Davies (Lia Williams) searching for evidence without a need to cover for friends; and the terrorists themselves working on a new untraceable explosive for a plan yet to be set in motion. The latter two are more or less background dressing that come into play whenever relevant to Quan and Hennessy’s escalating chess match, but their existence ensures we take nothing for granted while the fun of a one-man sexagenarian brute squad runs wild.

Chan is excellent. The quick-cut editing of Hollywood action definitely helps his stunt work considering he’s 63 years old, but you can tell he’s still doing a lot himself. And his comedic timing is perfect for the reality that skills can’t quite outrun Father Time when it comes to being thrown into walls and downstairs. His grimaces provide the level of authenticity we need to believe what it is he is doing, while his athleticism ensures that each fight is just barely won by the advantage of surprise and experience. But while this stuff is the reason most people fork over the cash to see Chan work, there’s enough dramatic expertise to give his role as grieving parent the necessary emotional weight, too. There’s no question he’d die for justice.

Brosnan is equal to the task as a man who earned respect via youthful brutality but who is now weary, senses dulled thanks to years behind a desk. His Hennessy has splintered from the IRA, whether intentionally or not, and his position as a go-between allows him to partake in the best offered from British and Irish alike. This means he always knows less than he thinks and less than he should despite still being Quan’s logical choice of targets to discover what’s missing. It’s Hennessy who is at the center of the plot, working angles for both nations and one for self-advancement. Quan is ostensibly smoking him out of hiding—something Bromley and company can’t quite afford to do considering he still may possess the power to end things quietly.

So all the characters arriving out of nowhere are offshoots of the Irishman. Something is up with his mistress (Charlie Murphy‘s Maggie), wife (Orla Brady‘s Mary), nephew (Rory Fleck Byrne‘s Sean), and favorite IRA pal (Dermot Crowley‘s Hugh McGrath)—each playing a more relevant role in the carnage than anyone suspects. And while that means that the eventual discovery of connections proves obvious simply because they exist, it doesn’t make the way they fit together any less exacting. The fact that we cut away to characters we have forgotton or didn’t think twice about in the first place demands that we pay attention, but expecting them to increase in importance is a worthy price to pay for watching Hennessy blow in the wind unaware. Our fun lies in Brosnan figuring out how helpless he truly is.

And while he loses control, Quan also acquires it. Because while Hennessy should be worrying about the moving pieces of a loop he’s been excised from, he can’t stop focusing on the desperate father terrorizing him. So he throws everything including the kitchen sink at this adversary as Chan battles each new roadblock with skill. The action is punishing if not necessarily fluid, the scars on Quan’s face marks of a feral creature operating in a darkness he thought he had left behind.

The Foreigner delivers two men in similar positions (reformed “soldiers”) whose motivations couldn’t be more different. While Quan has nothing to lose, Hennessy has everything to lose. One’s perpetually on offense, the other on defense, and both are beholden to a tale just smart enough to be worth our time.