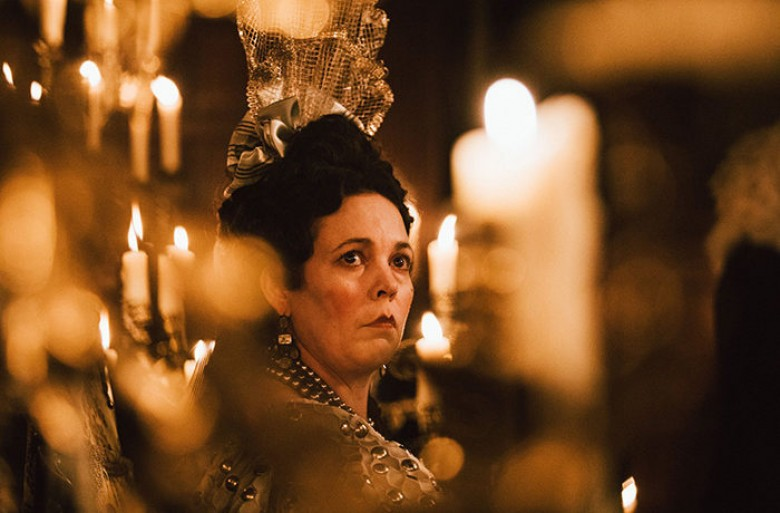 This isn’t your parents’ period piece. If the name Yorgos Lanthimos under the header of director didn’t already give you that impression, there it is. The Favourite has everything you’d expect from one, though: real-life characters, powdered faces and wigs, wars discussed from perches miles away from the battlefield, and political jockeying for power. The difference is what Deborah Davisdiscovered in a corner of British royal history, namely the love and affection shared between Queen Anne, Lady Sarah Churchill (yes, a descendant of Winston), and the latter’s cousin Abigail. To her surprise, it wasn’t hard to piece their dramatic relationship together with countless letters and passages speaking about it. The challenge was then fashioning it into a script and acquiring the financing to bring it to life.

Twenty years later (and a script polishing by Tony McNamara) sees Davis’ tale of self-centered motivations finally arriving in a darkly absurd, comedic form firmly secured in Lanthimos’ wheelhouse. In it we have the constantly ill, anxious, unsure, and unavoidably ignorant Queen Anne (Olivia Colman) hiding in her palace with seventeen rabbits and one true friend: Sarah (Rachel Weisz). A quick research sojourn to the past reveals they were thick as thieves even before the former took the crown. Sarah supposedly refused her husband’s lordship initially, agreeing only when the Queen bestowed upon them a lucrative allowance with which to uphold the extravagance of the title. And when given her own role as Mistress of the Robes, Sarah began using her unparalleled influence to become “Acting Queen” herself.

This is where we meet them: Sarah working hand-in-hand with close friend and Whig party-aligned Prime Minister Sidney Godolphin (James Smith) to crush the French with a military force led by her husband Lord Marlborough (Mark Gatiss). You’d like to hope Anne’s ability to let Sarah steer her orders wherever she saw fit is an embellishment (as well as the Queen’s bouts of embarrassed vanity), but it’s hard to deny the entertainment value such a hyperbolic drawing presents. Watching as Colman confronts a boy for looking at her by screaming at him to look at her only to then scream louder that he’s not allowed to look at her is a priceless scene proving as ludicrous as it does a damningly satirical look at royalty’s sense of superiority.

While it appears this is where truth gets skewed for the sake of the film at-hand, don’t pretend that’s enough to discount what’s being said between the lines. Whether Sarah invited her cousin Abigail (Emma Stone) to court or Abigail’s mother sent her there pleading for generosity (as the film portrays) is inconsequential. All we need to know to enjoy what’s about to ensue is that the new arrival used to be a Lady before her father put them into disrepute. So she isn’t some bumpkin coming into a palace with starry eyes and innocence. No, Abigail sees what her cousin is doing and leverages herself to steal a piece of the pie in order to reclaim her status. The race therefore commences to become Anne’s preferred puppet-master.

Sides aren’t staked purely on a personal level either when Abigail aligns herself (as a provincial woman) with the leader of the Labour Party, Harley (Nicholas Hoult). Theirs is a mutually beneficial arrangement that began in abuse with him serving as the perfect weapon to counter Sarah’s ambitions. Where Godolphin wants more war and the money necessary to fund it, Harley seeks a peace treaty to end the fight. The former’s mouthpiece uses tough love and pragmatism to turn Anne’s head her way while the latter’s herald wields flattery. So as Sarah seeks to let longevity strong-arm the Queen, Abigail bets on the powerful allure of present euphoria. Will Anne recognize what’s happening or will she choose whichever strikes her fancy and stamp her foot with authoritative finality?

What unfolds is therefore a wild adventure pitting political intelligence against street smarts. Sarah desperately attempts retaining decorum with thinly veiled threats and underhanded dealings while Abigail enjoys a knife fight in the open through performative waterworks and a stable of men willing to do whatever she asks. At a certain point we also must find ourselves wondering if both are truly in it for themselves since one feigns modesty and self-sacrifice while the other truly does look out for the Queen’s best interests. One has only companionship to sustain while the other has everything to lose or gain depending on how things shake out. So they put on airs and position their pieces on the board to see what happens while the Queen between them stands abused.

Colman is magnificent with an authentic pain behind softened eyes. We laugh at her being used and yet also notice clarity in her actions. Maybe she never wanted the throne. Maybe the love Sarah gives in private is enough to keep her happy and thus she goes along with the Whigs to ensure it lasts. Maybe in her heart she knows Harley’s party is right, but cannot voice as much until Abigail arrives to fill Sarah’s role in the bedroom and in the halls. Queen Anne is therefore as much a tragic figure as she is hilarious: muted by the solitude of her crown and the anguish of her ailments while presenting herself as desperate to do anything for the electric life these women are willing to provide.

Stone and Weisz are equal to the task, two-faced and deftly deceptive with nefarious maneuvers only outshined by public grins of provocation. Stone steals the show early with a wonderful elastic expressiveness during the first half of the film, hiding in the shadows with as much cynicism and humor towards her surroundings as we possess. This is true because we feel that Weisz’s Sarah is putting on as much of a show for personal gain as Abigail soon does. We’re ultimately wrong in this thought, though—a revelation showing how great her performance is. Sarah’s motivations only seem identical to Abigail’s on the surface because they really couldn’t be more different. And while aligning with the troublemaker is fun, you’ll be hard-pressed not to empathize with Weisz by the end.

Lanthimos plays with these façades throughout, presenting us with avenues to travel before diverting them to show something else was happening all along. What looked like a level battle is exposed as a usurper being fended off. Parallel enemies are revealed as enemy and protector waging war in the exact opposite way they desire the “real” war in France to go. And he does it by turning the genre’s visuals on its head with fisheye lenses, lewd background acts, and a volatile yet uncertain voice commanding attention if only to conjure respite from the memories of a past unencumbered by the responsibilities of the crown. It might be Lanthimos’ most straightforward piece since Dogtooth, its dry humor keeping us sharp and ready to expect the unexpected.