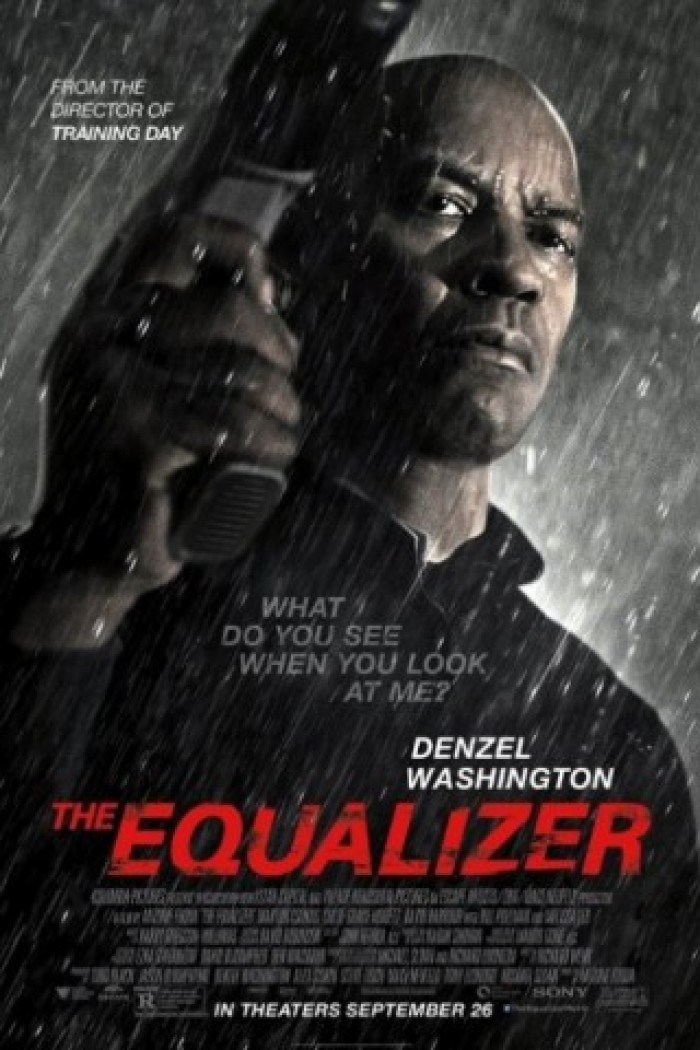 It may be because I knew beforehand that Antoine Fuqua‘s The Equalizer was based on an old 80s TV show (from Michael Sloan and Richard Lindheim), but it felt very episodic in a way that made it utterly boring. There’s that time Robert McCall (Denzel Washington) helps his coworker lose weight. That time he gives a troubled young prostitute a reason to smile. Don’t forget when he helps someone out of a jam with some corrupt cops. Or when he takes down a Russian mob syndicate single-handedly. It’s all delivered as stilted as that sounds—alternately dramatic, comedic, and so over-the-top you’d think it was actually based on a comic book.

This is all a real shame because it starts off nicely via a scene of Robert readying for his day. Everyone knows going in that this thing is about Denzel wreaking havoc like the one-man wrecking crew he is, so it’s surprising to see where he lands after he finishes shaving, dressing, and playing with his stopwatch. Because rather than picking up a gun to go out and bust heads, he winds up pushing a handcart at the local home improvement store before laughing with a couple teenage co-workers who call him ‘Pops’. It’s far from the beginning you’d assume from the trailers and therefore adds a level of intrigue I was genuinely excited to see play out.

Aside from seeing his good nature and how his insomnia allows him to read every night at a corner diner lit up so bright you have to believe Fuqua was going after an Edward Hopper Nighthawks vibe with every exterior shot of the patrons within, it takes about half an hour to finally start the movie. I get it, we need to watch him hemming and hawing about whether or not to help the aforementioned girl Teri (Chloë Grace Moretz) once her situation escalates from tears to bruises to a visit at the ICU because we don’t know who he is or what he was. We can guess, however, that whatever he retired from was hardcore enough to leave him in a self-imposed exile as Mr. Quietly Normal until his conscience can no longer remain silent.

I was okay with screenwriter Richard Wenk going full bore into the bloody action after waiting so long because that’s what I came to see. Rather than keeping the peddle to the floor, however, he and Fuqua decide to let it breathe again. Here we are: finally knowing Robert’s capabilities and introduced to the Russian cleaner (Marton Csokas‘ Teddy) smart enough to be a formidable opponent and for whatever reason we have to wait another twenty minutes before anything is done about it. Then we wait another twenty after they meet because the filmmakers want to grind everything to a halt so they can spell out Robert’s CIA past and waste budget money on Melissa Leo and Bill Pullman‘s familiar faces.

With so many starts and stops, you can’t help feeling the slog an almost two and a half hour action film delivers without any true consistency. Add the overbearing hard rock soundtrack lining way too many scenes and the whole becomes somewhat laughable as well. I have to guess this tonality was desired, though, considering the climatic confrontation has Denzel remorselessly killing bad guys with barbed wire, drills, and nail guns, but it doesn’t quite work when you’ve already a set up a pretty severe drama with a contemplative tone at the start. There is something to the psychological wrestling match of a widower who promised never to become the killer he must to clean up his morally bankrupt Boston streets. But all that quickly evaporates into rote cliché.

The Equalizer is at its best when it’s funny. Washington adds a lot of this through a steely stoicism that turns to jovial friendship on a dime. There’s an authentic humanity prevalent from watching him interact with Moretz in a way that never panders or judges her and goofing off with co-workers he has believing he used to be one ofGladys Knight‘s Pips. His Robert is a good guy who can’t help himself from watching over those in need. Sure he has a personal relationship with some, but never one with a strong enough bond to really matter above being his “fellow man”. Heck, Moretz’s Teri disappears for the majority of the film making it so Wenk and Fuqua can’t even use her as manipulative bait. Robert’s is merely altruistic … and in love with murder.

He’s ultimately a well-formed white hat opposite Csokas’ highly entertaining black. The character of Teddy is exactly what you want as a villain in an exaggerated noir: a foreigner to hate for picking on the little guy but also to love in his psychopathic and fearless delight of carnage. David Harbour does a good job as his putz accomplice forced into helping despite being way over his head, but Csokas is the adversary both Denzel and we care about. Sadly, Wenk feels as though we hold anxiety about more, writing the story so it becomes about Russia terrorizing America and not the wellbeing of a young girl it began as. This becomes the film’s biggest mistake because just when I thought I knew its goal, it turns into something much bigger I could have cared less about.

Fuqua should have gone with an outrageous tone the whole way because the climax inside a home improvement store while sprinklers drench everything in sight is a hoot. Trying to infuse seriousness does him no favors because in the end the movie is anything but. So all the visual flourishes like zooming into tattoos and weaponry before a fight as though Denzel’s Robert has Spidey-sense proves unintentionally hilarious while the prolonged cat and mouse chase makes us wonder how incompetent Teddy is despite knowing he is anything but. There was definitely potential here if only it found a singular and consistent voice. Cut thirty minutes or more out and Fuqua may still find one. As is, it’s simply an overlong mess.