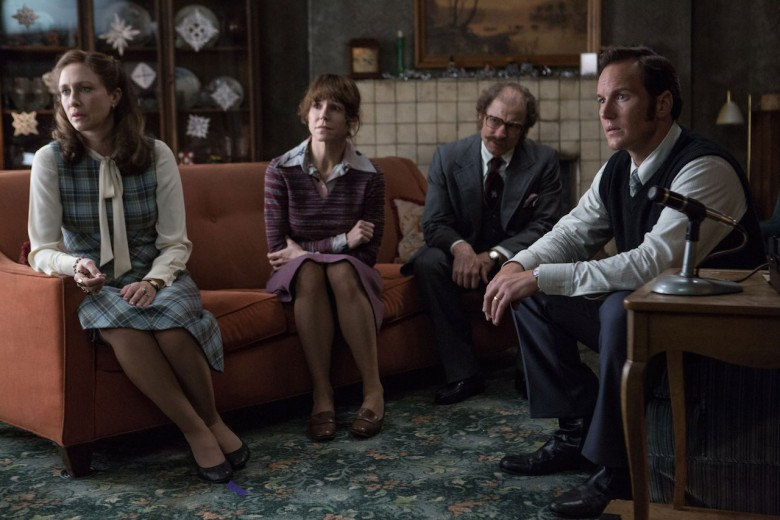 “This is the closest to Hell I ever want to go”

When a formula succeeds as well as that of James Wan‘s The Conjuring and its real life subjects have as extensive a Rolodex of haunting investigations as Ed and Lorraine Warren, the prospect of a sequel arrives as both inevitability and an initial pause. Generally these types of projects change creative hands early so studios can rush ahead without worrying about scheduling conflicts, but Wan has never been one to shy away from involvement on subsequent entries to his work. He provided stories and/or production oversight for the Saw sequels, came back to direct/co-write Insidious: Chapter 2, and refused to let The Conjuring 2 go despite following an arduous big budget Furious 7 shoot. And we should be glad he did because Wan may have bested the original.

Similar to its predecessor, this entry begins with the Warrens (Patrick Wilson and Vera Farmiga respectively) on a separate case removed from the main story. The Conjuring had an abbreviated look at Annabelle to ease our way into this demonologist and clairvoyant pair’s life, a prologue with thematic relevance as well as plot-heavy exposition to be built upon later during their fight against the spirit terrorizing the Perron household. The Conjuring 2 fast-forwards a few years to commence upon the duo’s most infamous file: the Amityville Horror. Because we’ve all seen the movie, its bleeding walls are inconsequential. Rather than scares, Amityville’s purpose here is to make a very precise parallel to what’s coming while also introducing an inhuman entity that seems to reject leaving the Warrens alone.

Cue the text scroll and a description of their life’s tumult after what was more or less confirmed as a hoax. The media circus that ensued took a lot out of them—enough to spark a self-imposed semi-retirement helped by the demonic nun (Bonnie Aarons) haunting Lorraine’s visions with premonitions of death. We’ve seen what this job has done to them, the risks they take as well as those suffered by their daughter Judy. Why not take a break and focus on the academic side of things rather than continue running onto the frontlines? Lorraine doesn’t know what this darkness is following her around, but it’s best not to provoke it. Unfortunately for the Warrens, however, Amityville fame and their empathetic compassion drag them back into the fray.

Coined “the British Amityville” and currently the most studied case of possession the world’s ever seen according to press materials, the Catholic Church recruits the Warrens to England to see if what’s being reported in Enfield is true. The Hodgson family—divorced mother Peggy (Frances O’Connor) and her four children (Lauren Esposito‘s Margaret, Madison Wolfe‘s Janet, Patrick McAuley‘s Johnny, and Benjamin Haigh‘s Billy)—has discovered something cruel in their midst. The former owner (Bob Adrian), since deceased, has manifested as an evil old man delighting in the children’s screams as he moves chairs, changes TV channels, and takes control of young Janet’s body. His ghost is destroying their resolve, tearing them apart. And the Warrens’ job is to document proof so that the Vatican may feel comfortable intervening.

Their fact-finding mission soon becomes more despite promises made to stay out of the fire. It’s just too much to ignore the pain in Janet’s eyes and the fear her family holds as the town labels them pariahs save their neighbors the Nottinghams (Maria Doyle Kennedy and Simon Delaney). If Amityville was a circus, this is the Macy’s Day Parade. Local believer Maurice Grosse (Simon McBurney) seeks answers, skeptic Anita Gregory (Franka Potente) looks to prove it’s all a hoax, and the Warrens have one goal in mind: keep the Hodgsons safe. Real or not, their wellbeing should always be paramount to the discovery and they’re in desperate need of a friend, especially once the truth of their situation is revealed to be much worse than originally assumed.

The Conjuring 2‘s trajectory is almost identical to the first, but dare I say more robust. Screenwriters Carey and Chad Hayes returned to craft the initial draft with Wan while David Leslie Johnson shored things up before cameras rolled. It could be his influence that injected a bit more tension to the already dense atmosphere, but I’d be more inclined to say it’s really a matter of the Enfield case trumping the Perrons in intrigue. Whether or not the added bonus of also having the Warrens haunted by a sinister, subtler entity was steeped in reality or completely manufactured, this parallel plotline is crucial to giving the whole a deeper sense of dread. It’s not just about a house and the people sent to stop it this time.

Wan’s use of practical effects wherever possible once more vaults the film above any horror film seen since we were first introduced to this new cinematic version of the Warrens. I’d be hard-pressed to believe some things were handled without computer enhancement—the nightmare-inducing Crooked Man appears faked in a few instances—but nothing was so glaring as to remove me from the edge of my seat. The creature design of the Demon Nun is impeccable in its simplicity, a visual ruse with a painting of her magnificently rendered for a big scare early on. And while so much of the best bits come from surprise, it’s not shock. Most times we know a jump-scare is coming, but Wan finds a way of letting it jolt us nonetheless.

I can vividly remember so many moments from Farmiga’s Lorraine reenacting the Amityville murders as the man who committed them is reflected in the mirror to Wilson’s Ed interviewing a possessed Janet while turned our way so her body can be blurred in the background to grow in the darkness as things escalate. The idea the whole thing might be an elaborate hoax never disappears and lends the investigation a sense of wonder The Conjuring didn’t—nor admittedly needed to succeed. But this entry isn’t about a stalwart duo confidently going places the church may not be ready to visit; it’s about a crisis of faith. The Warrens enter this case with visible fear and the prospect they may be undone by it adds an impressive new layer.

So while the effective scares, impeccable 70s aesthetic (McBurney’s Grosse epitomizes vintage English academic), and expert mood remain, the Warrens rendered with doubt is the true selling point. We’ve seen them in action so simply doing it again wouldn’t conjure that same awe. The filmmakers must dig deeper to force us to care about the Warrens as more than ghost-hunters. They’re humanized here in a way the first’s brief scare with Judy couldn’t provide. We learn of their love’s power and the danger their field elicits (assuming demons are real). And despite such palpable fear they’re still able to conjure smiles from the hopeless while singing Elvis Presley’s “Take My Hand, Precious Lord”. These films aren’t about God’s light; that which cuts the darkness is the Warrens’ conviction.