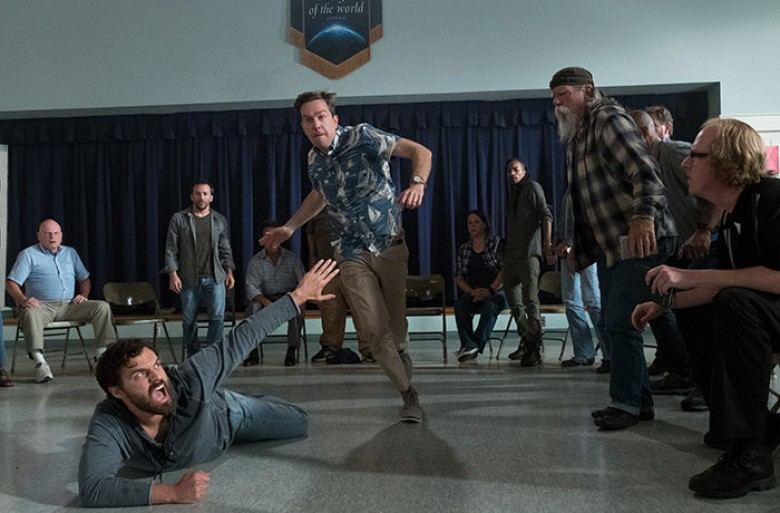 “Our friend is a psychopath and this is scary”

The most memorable moment throughout Jeff Tomsic‘s Tag is the introduction of one of the five grown men engaged in a thirty-year game of trading who’s “it.” The player is “Chilli” (Jake Johnson) and he’s loudly smoking a bong while talking to his father, an aging man covered in tattoos readying for a turn. It’s not about what, but whom: Brian Dennehy. The venerable Brian Dennehy inexplicably came onboard a zany high concept comedy for less than five minutes of screen time. Why? I scratched my head and wondered if I was just looking for something interesting in the chaos. But then I read the Wall Street Journal article afterwards only to discover that one of the ten men this film immortalizes is named Brian Dennehy.

What a revelation, right? Wrong. The Brian Dennehy of the story is chief marketing officer of Nordstrom Inc., not the actor. Maybe this casting was an inside joke, a gimmick for the families of those involved. Or maybe Dennehy liked the script and wanted a paycheck. You’ll have to ask him. My point is that of all the wild stuff that happens throughout this film, he was the major takeaway because the thought of this cute human interest story getting a Hollywood budget treatment never quite gelled in my head. At most it was a good idea for a sketch. At best a worthwhile subject to receive the documentary treatment for which the end credits prove footage of the real gang’s tags exists. We received cheap laughs instead.

The worst part is that Rob McKittrick and Mark Steilen‘s script eventually goes places able to provide an authentic arc worthy of this exposure. The final twenty minutes or so speaks about the longevity of friendships and how some drift apart despite annual get-togethers. It gives context to the mantra chanted throughout (“We don’t stop playing because we grow old; we grow old because we stop playing.”) besides faux pithiness because “playing” isn’t nearly enough. When a game meant to bring them closer finds four (Ed Helms‘ Hoagie, Jon Hamm‘s Callahan, Chilli, and Hannibal Buress‘ Sable) discovering the fifth (Jeremy Renner‘s never-been-tagged Jerry) is getting married in mere days, things have gone awry. Confronting it with inevitable melodrama at the very end, however, is too little too late.

By that point we don’t actually care about anyone. I’d add “enough to feel their regret,” but I literally didn’t care at all. This isn’t some personal issue either. The film simply doesn’t think we need to beyond the game itself. We gradually realize that Jerry is drawn as some elusive spy-like ninja forever avoiding the others as they cynically forsake any morality in their quest to “tag” him. Camaraderie exists in brief spurts that surprise the men onscreen as much as us (“Hey, I missed this type of unique verbal sparring that’s meant to help us pretend we have personalities.”), but never long enough to be anything but filler between the battles. Throwing us directly into the fire does a disservice by ensuring no one transcends caricature.

And that’s okay for the comedy. I laughed a bunch during the first hour because it’s all so break-neck and absurd. Helms’ is super gung-ho, Hamm super self-absorbed, Johnson super paranoid, Buress super chill, and Renner super cool. They’re each a two-dimensional archetype flung together for action-packed antics made funnier by the fact that everything occurs in mundanely everyday environments (donut throwing stars, ill-advised parkour, and fire extinguishers to the face). War tactics have been superimposed over domestic suburbia complete with a drill sergeant oozing over-the-top aggressive tenacity courtesy of Hoagie’s wife Anna (Isla Fisher). There’s a groupie (Steve Berg‘s Lou), a distraction (a wasted Rashida Jones as undercooked love interest), and documenter (Annabelle Wallis‘ gender-swapped journalist Rebecca in lieu of Russell Adams) adding color and faux complexity.

Rather than actually be about friends, Tag is about winning. No last second reversal of tone can change this reality. Everything and everyone is a means to an end whether serving the floundering quartet or their lone target. We move from one potential ambush to the next—each an elaborately constructed ruse out-maneuvered thanks to Jerry’s heightened senses and deductive reasoning a la a twenty-first century Sherlock (whichever modern iteration you like best). It’s less monotonous than uneventful. Suspense is so non-existent that we must revel in the injuries of the fallen before watching them rise for another futile round. It’s funny enough to keep focus and the actors are obviously having a great time, but the underlying themes are screaming for so much more.

Too often these Teflon warriors shrug off slights and ignore viciousness in the name of the game. They too readily accept their adversarial positions for us to even believe they’re friends rather than competitors hitting the field for thirty days every May because of contractual obligation. They turn a wedding into a no holds barred warzone to capture their “white whale” and yet they call timeout when any of the innocent bystanders who don’t know of their ruthless natures gets too close. Tomsic is always dialing his characters back from the edge for lazy aftershocks of self-realization that they’ve gone too far. But that negates what works best. We laugh hardest when the line of decency is crossed and yet the filmmakers try to play both sides anyway.

So we’re left with an entertaining but hollow beginning moving towards an ending of fabricated emotional release. It’s one or the other, guys. Either let us invest in these people so they can earn their humanity or let them be as sociopathic as possible without remorse. These two choices don’t mesh and the result only proves the filmmakers didn’t know what they wanted to do with the property. And that’s why a documentary was their best bet. Let the real middle-aged men tell their tales of quaint one-upmanship. Don’t turn it all into a sordid affair and not have the guts to go the extra mile. I’d rather revel in unbridled amorality than scoff when blindsided with melodramatic reveals that feel like another con regardless of the truth.