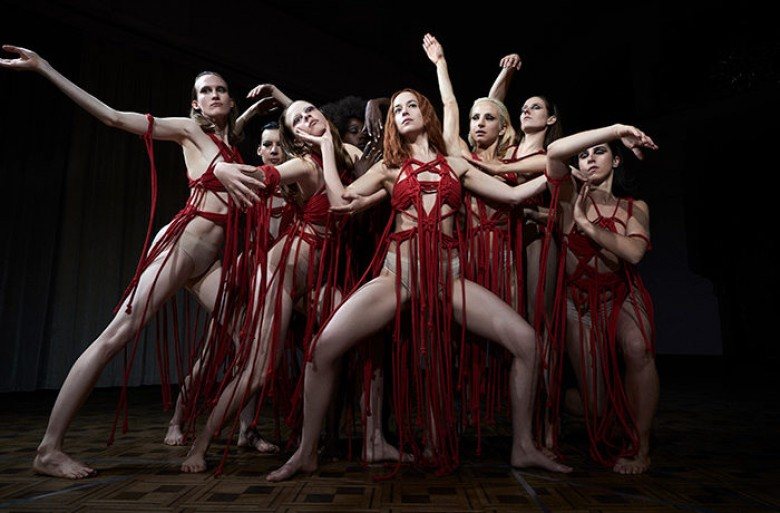 I’m no big fan of Dario Argento‘s Suspiria. It’s a gorgeous film overflowing with mood and aesthetic that ultimately becomes the poster child for style over substance before gradually revealing more to offer upon subsequent viewings. In the end, however, it still doesn’t add up to much besides its place as a prototypical entry in the horror genre that’s inspired countless works in the four decades since release. So I got excited when a remake was announced. If ever a “classic” movie deserved a new angle and update to make good on unfulfilled promise, it was this. And who better than David Kajganich to write considering he admits holding no reverence for the original either? A successful remake should be able to stand on its own.

Here’s the good news: Kajganich and director Luca Guadagnino‘s Suspiria definitely stands on its own as a bold reimagining of Argento and Daria Nicolodi‘s dance studio coven. Besides superficial details like setting, supernatural entity, and some character names, there’s actually little connecting the two. We’re talking about a complete overhaul stripped down to the studs in order to rebuild a new vision steeped in the guilt ravaging Germany directly after World War II. Vibrant reds and blues are replaced by dour and oppressive earth tones. Flights of fancy with neon blood are pushed aside for severe nightmares of mutilation and pain. And rather than focus on the young American girl just arrived, the camera moves towards a German man desperate to atone for failing to save his wife.

What’s intriguing about this decision to spotlight a man inside a world populated by women under the control of watchful and angry witches (there’s no need to hide this revelation until the climax anymore) during a period of great unrest and possible extinction is that he (Dr. Josef Klemperer) is played by a woman. It’s common knowledge now (and has been despite tongue-in-cheek motivations to keep the truth under wraps) that Tilda Swinton is Lutz Ebersdorf, the actor playing Klemperer. The reason it’s common (and not a spoiler) is because it has no bearing on the final result. This isn’t Peter Pan or Wizard of Oz duality wherein actors play someone in reality and another in protagonist delusions. It’s simple “Art” with a capital “A.” And it’s hollow.

There’s no in-film reveal. Klemperer is a man and the actor playing him is a man as far as anyone besides Swinton is concerned (it’s been said that some on set didn’t even realize it was her). As a result we must look beneath the surface and wonder what this stunt provides metaphorically and thematically. All I can conjure, however, is a desire to shift focus away from the fact Kajganich intentionally wrote himself into the script. Here’s a brand new character shoehorned in to claim our attention as the manifestation of the male gaze. Just like in 1977, this is a female-driven narrative created by men. So maybe having a woman become that man allows the criticism to be addressed? That seems more excuse than pithy commentary.

But so does the whole. There’s a line during Act Six (the film is told “in six acts and an epilogue”) wherein someone screams, “This isn’t vanity, it’s art!” and boy does that not perfectly encapsulate the breadth of what’s happening. The sentiment had been stated previously with much more earnestness at a time when we still believed Suspiria would prove “high art” by its end. So hearing it again with such over-the-top performative flair as chaos spilled forth inside a gore-fueled red room of apocalyptic cleansing only earned a laugh. Somehow the remake revealed itself to be sillier than an overwrought, over-dubbed predecessor embracing its cheese. It’s so crippled under the weight of its own self-importance that I finally understood the criticisms of last year’s mother!

I’ll admit, though, that I was very much into Acts One through Four. It’s during them that we follow Susie Bannion (Dakota Johnson) as she integrates with a prestigious German dance company led by the enigmatic Madame Blanc (Swinton) only to inexplicably become its undeniable star. It’s cool that we get to see actual dancing (something Argento ignored with his plot-driven plagues) and understand Blanc, Miss Tanner (Angela Winkler), and other instructors as legitimate masters of the vocation rather than merely using it as a front for blood rituals. Their movements become their spells with incantations being erased in lieu of improvisational gyrations giving power to intent. Because this is literally how they rule, the way in which outsiders view their magic to be entertainment is the façade.

It’s your run-of-the-mill tale of witchcraft rebirth with coven leader Helena Markos (recently voted to continue her reign despite opposition by Blanc) in need of a young vessel to remain alive. The hope was for Patricia (Chloë Grace Moretz) to give herself to that goal, but her unwillingness to do so drove her mad (and missing). Susie—a dancer with no formal training who apparently intrigued Blanc enough to earn an audition—becomes the logical replacement once her handle on the choreography is proven. She doesn’t understand this other role yet, but neither does anyone else until Klemperer lets Patricia’s (and Susie’s) friend Sara (Mia Goth) in on the secret. He believed something triggered a mental break in Patricia and hopes Sara will discover its origins.

Those origins are of course the coven of middle-aged women laughing behind the scenes and playing with any man possessed by a false sense of authority and power over them. You could read this as a comment on women suffering during World War II and now fighting back to regain control over a planet destroyed by man’s greed, but not really. Kajganich and Guadagnino’s instead want to talk about the guilt of those men via Klemperer. They want him to witness what’s happening and to be tortured for his role in trying to stop it. So I guess he’s being punished for not being a sympathizer? Or was he a Nazi sympathizer who let his wife (Jessica Harper) disappear and thus is being punished for that? I’m clueless.

Take a step back and you’ll wonder why Klemperer is even there. Suspiria surrounds witches, their victims, and false Gods. Remove him and you’re not missing much besides the filmmakers’ desire for political commentary that detracts from the central plot line. It’s all distraction for a final, extremely cheap reveal that only renders the best bits of intrigue from the start (mostly Susie’s fever dreams of an abusive childhood and her dying mother) moot. I loved the notion that this young woman’s desire to potentially accept witchcraft rather than kill it like her 1977 namesake was to reclaim the maternal dynamic she lost. The blatant usurpation of this theme for empty yet entertaining carnage left me with too many loose ends born from excessive trickery that ultimately goes nowhere.

It’s as though Kajganich wanted to shake any style over substance gripes so vehemently that he overcompensated by putting in too much substance. Plot threads that go nowhere or become obsolete by the end can’t sustain a three-and-a-half hour runtime. Those things conversely only work towards having it feel longer. The filmmakers asked me to invest in Klemperer and Bannion and I did because the case to do so was solid. But while the gradual removal of the floor beneath their feet initially had me leaning forward to experience the consequences, its reveal as a deus ex machina left me angry and tired. Perhaps Guadagnino was the real witch after all, luring us in with promises of grandeur only to use us as fuel via box office receipts.