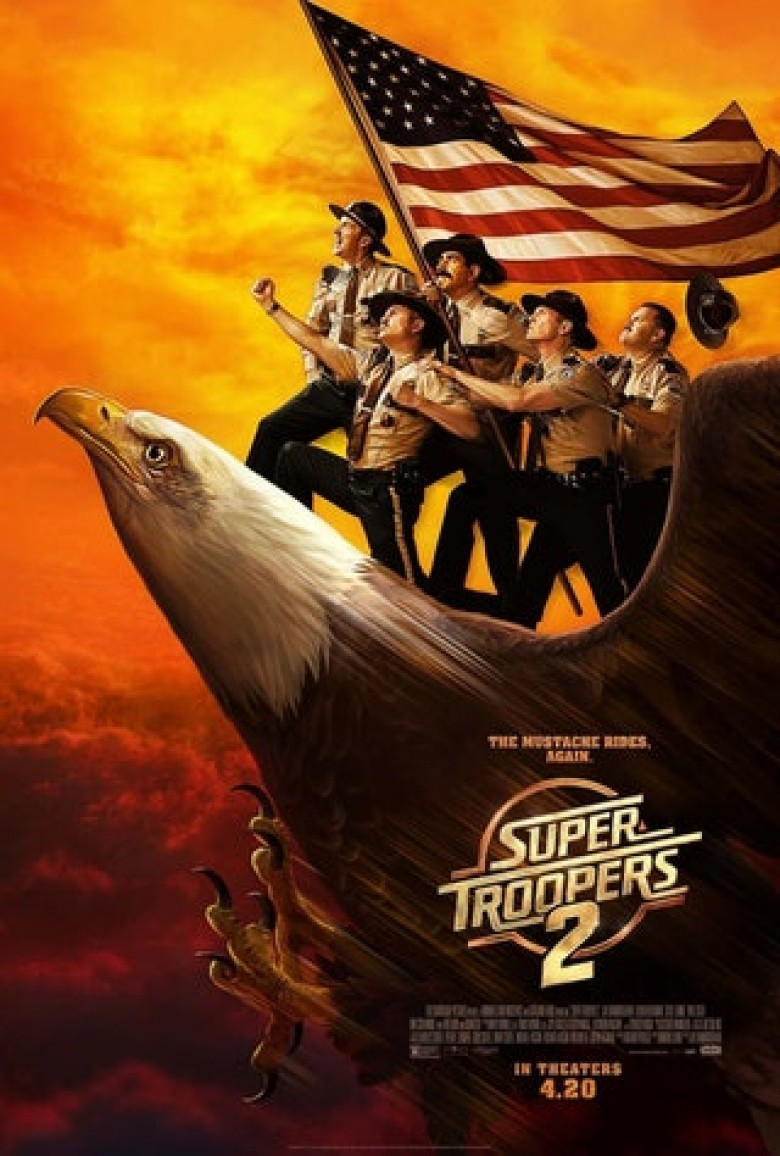 “Happiness in the household”

To look at Broken Lizard is to see the ever-changing landscape of mid-range studio cinema at the turn of the century. These five guys (Jay Chandrasekhar, Kevin Heffernan, Steve Lemme, Paul Soter, and Erik Stolhanske) formed a comedy troupe in college before taking their first film Puddle Cruiser on a campus tour. It allowed Super Troopers to become a reality with supporting players like Lynda Carter and the venerable Brian Cox. Fox Searchlight paid around three million after its Sundance debut, made twenty million in box office, and put these stoners on a path towards Club Dread and Beerfest. But despite another twenty million (on a budget of seventeen) for the latter, their follow-up The Slammin’ Salmon(perhaps my favorite) was dumped in 2009. Their star had faded.

So they did what many have these past few years and went back to the well. A sequel to their breakout hit was the no-brainer choice to reclaim the limelight, but Fox Searchlight cautiously declined unless they could raise production funds themselves. Fast-forward to an Indiegogo campaign that crowd-sourced its two million dollar goal in twenty-six hours before hitting 4.7 million at the final bell. But nostalgic fan appeal doesn’t equal contemporary mainstream acceptance. Giving Super Troopers 2 a wide release could have easily backfired if the thousands of backers (myself included) who earned Fandango bucks as a perk showed without any outside help. To everyone’s surprise, however, audiences did turn out. By the end of its run it just might be the troupe’s highest grossing film to-date.

Does it reinvent the wheel in terms of their oeuvre? No. But that’s not necessarily a bad thing considering they’ve built a brand on their consistent high-ish lowbrow shtick. We’re seventeen years past the original’s release and nine since their last film, so familiarity is needed to welcome back old friends and introduce new ones to the Kool-Aid. Remember: this could have been a reboot instead of a return. Thankfully the guys retained creative control to expand rather than simply rehash against today’s prevailing Hollywood sensibilities. There’s still a lot of rehashing involved with callbacks and mirrored plot threads playing on the idea that their characters would wrongly assume things should happen exactly like before, but the balance between homage, subversion, and freshness is nicely measured to avoid staleness.

The main plot pits the newly reinstated Troopers against a local Canadian town’s trio of Mounties (Will Sasso‘s Archambault, Hayes MacArthur‘s Mountie Podien, and Tyler Labine‘s Mountie Bellefuille). The border markers that should span a straight line between Vermont and Québec are discovered to form a half circle above their previously assumed position. Rather than adjust them, Canada and America agree to move the line instead. This means the citizens of St. Georges du Laurent will soon become Americans, so who better to teach them the ways of crass oafishness than Thorny (Chandrasekhar) and the gang? The mayor (Rob Lowe‘s Halifax hockey legend Guy LeFranc) has the Mounties’ back, Genevieve Aubois (Emmanuelle Chriqui) steals a Trooper’s heart (Stolhanske’s Rabbit), and a stockpile of counterfeit drugs adds ham-fisted intrigue.

Unlike Super Troopers, however, the sequel isn’t as staunchly interested in pushing story into a role of equalizer opposite the jokes. The animosity between Americans and Canadians may serve the former’s mystery, but its true intent is creating the friction necessary to sustain the antics that made this troupe legend. It’s an excuse to put a live bear in Captain O’Hagan’s (yes, Cox is back) stationhouse and to let the boys don Mountie uniforms for an extended montage of fake accents and juvenile humor. Some gags admittedly go on too long (Thorny getting hooked on an estrogen pill only augments the dearth of substantial female roles by mocking feminine stereotypes through a male surrogate), but most do earn an authentic guffaw before devolving towards their cringe-inducing completion.

In the end the whole is supremely stupid and riddled with lazy set-ups hinging on America’s penchant for mocking our northern neighbors. But here’s the truth: it was always going to be those things. So while the result leaves it as the weakest Broken Lizard film since Puddle Cruiser, it still proves a success for no other reason than providing 99-minutes of unpretentious humor. There’s some political commentary in the culture clash with a pointed “Make America Great Again” reference on behalf of the group’s boorish outlier (Heffernan’s Farva), but other than that the laughs exist fully on their surfaces. There’s no high-concept scenarios (Club Dread‘s human Pac-Man) or surreally absurd personas (see Barry Badrinath or Zongo), but there are a couple choice jabs hockey fans will love.

MacArthur’s rage makes him the standout of the Mounties (their best gag an argument over Danny Devito). Lowe chews scenery like no one else despite his role being flimsy, Jim Gaffigan returns for a good guffaw, and don’t forget to stay during the credits to witness the so-called “Fred Savage ride-along.” I love that Cox is allowed the latitude to unhinge more than the original and the idea to give Farva more opportunity to explode actually works for the most part. Other than that it really is an ensemble effort moving back and forth between different pairings to keep the comedy at the forefront and relationship dynamics fluids. It’s best when they let loose with absurdity, though—something of which they probably could have done more.

Super Troopers 2 won’t be the cult classic its predecessors are, but it makes good on their Indiegogo promise from 2015. It honors the characters they created almost two decades ago even if it does so in a safe fashion. If nothing else it shows that audiences are still up for the troupe’s shenanigans as long as whatever studio decides to distribute their work isn’t expecting an insane return. It saddens me that the only follow-ups they’ve been pitching are more sequels via Super Troopers 3 and Potfest, but maybe those potential successes will subsequently lead to something new and original. And who knows? This might be the end for them anyway save another crowd-sourcing success. If so, I’m glad we got one more mustache ride.