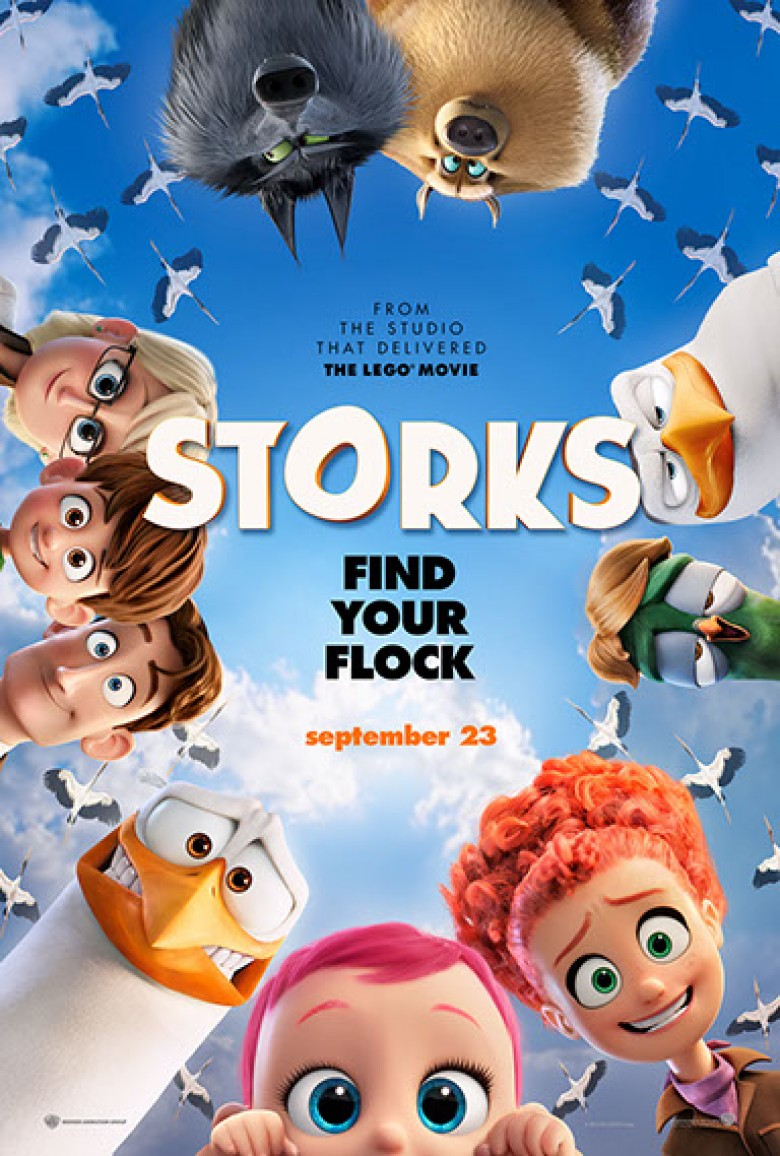 While a bunch of adults were definitely having a good time during Nicholas Stoller‘s Storks, I’m not sure about their children. It wasn’t restlessness, though. If anything they were catatonic, a similar state as myself. Now I did chuckle at a few of the higher concept stuff because the absurdity of a stork and penguin stabbing each other with a fork in silence so as not to wake a sleeping baby is funny. And the children chuckled at least twice in response to displays of destruction because context is unnecessary for that type of gag. Maybe context isn’t really a required aspect for plot either, something to which this odd adventure filled out by random“Family Guy”-esque interludes within the obviously kid-friendly world of corporate culture can attest.

Nothing screams family weekend of fun at the box office more than profit margin charts, leadership ascension, and the morality-based nuance of spinning the act of firing someone into a selflessly charitable “liberation”. How about the inclusion of the aptly named Pigeon Toady (Stephen Kramer Glickman), a Spicoli-like outcast willing to do whatever or be whomever is necessary to feel included while utilizing that old 90s gem of a “beard” joke about having a girlfriend in Canada? Or maybe gender stereotypes wherein Tulip (Katie Crown‘s “orphaned” eighteen-year old who never got delivered to her parents because of the crazed stork who fell in love and wanted her as his own) seeks to help a crying baby out of DNA-driven, generational-spanning maternal instinct rather than simple unbiased human sympathy?

It’s no surprise the writer of Get Him to the Greek and Sex Tape is Storks‘ brainchild or that Andy Samberg voices its lead. It feels like it was an R-rated comedy for them to run wild before pre-Sausage Party studio sentiment got cold feet. In my hypothetical scenario former Oscar-nominated Pixar animator Doug Sweetland (Presto) was therefore brought in to co-direct and round the corners of this satirical mess dealing with capitalism and ego into a PG-rated commodity for mass exposure. Between the dead-eyed, pupil-less penguins (I may have nightmares); Nate Gardner’s (Anton Starkman) self-centered and knowingly neglectful realtor parents (Ty Burrell and Jennifer Aniston); and the blurred but no less gratuitous nude shot of Pigeon Toady’s butt, I’m flabbergasted it ever got beyond the script stage.

Even its attempts to try and infuse heart and soul from its adoption-heavy story (the storks took Tulip in after ruining her life, a pack of wolves led by Keegan-Michael Key and Jordan Peele hope to take in a different baby as their own, and mention of “real family” proves a major hot-button issue of sarcasm-veiled emotional duress from the “adoptive family”) go nowhere courtesy of its smugness-tinged tone. This is not the wonderful depiction of love The Boxtrolls provided a few years back. It’s also not equal to the greatly under-appreciated bumbler-saving-the-day trope that Arthur Christmas utilized so well. The latter would need Tulip’s empathy to be the driving force of the film rather than the soon-to-be anointed new stork empire boss Junior’s (Samberg) ambition and cowardice.

So after introductions are made and Tulip accidentally turns on the old baby-making factory (long-since shut down in lieu of the storks rebranding themselves as cornerstore.com couriers thanks to the business acumen ofKelsey Grammer‘s bigwig Hunter), the bumbling ceases because teaming her and Junior together suddenly makes her the straight-man of their comedic duo. He was the professional trying to run a tight ship and she the manic whirlwind spending an eternity-spanning three minutes talking to herself via boredom-creating split personalities. But now she’s the headstrong, melancholic savior hoping to ensure the baby she manufactured finds its home and he the crazed junkie hoping not to be seen with the child in fear of losing his promotion. All while Pigeon Toady tracks their every un-stork-like move.

It’s funny on a base level where Samberg drags jokes out to force us into laughing out of discomfort—another “Family Guy” tactic. There’s a sing-along moment to The Heavy‘s “How You Like Me Now?” that devolves into gibberish like a “Saturday Night Live” sketch and self-reflexive commentary by characters in the film quizzically remarking on the implausibility of wolves forming transportation vehicles out of sheer will. We giggle at the jokes’ madness, not their intelligence or wit. This is hardly a formula for lasting success or a breeding ground for necessary lessons to be learned. Why show us parents who care for their son because they should when it’s funnier to listen to them talk about lying to the boy so they can feel good?

Nothing that occurs is selfless. The whole reason Tulip even makes a baby is because Nate Gardner is sick of his parents choosing work over him and wants a brother with ninja skills to keep him company. The only character that deserves to be selfish is Tulip because of her tragic backstory and yet she’s judged for wanting to do something for herself (find the family she’s never met). Junior just wants a promotion he can’t vocalize as to why; Hunter seeks immortality among stork entrepreneurs; Pigeon Toady depressingly wants validation; the wolves want predatory ownership over a defenseless baby; and Jasper (Danny Trejo as the stork who didn’t deliver Tulip) hopes for a chance at redemption. There’s literally nothing of substance here, just cheap laughs.

And that’s okay in an R-rated romp of random skit-like displays showing the humor of parenting through sleep-deprived nights and the cutthroat nature of career-oriented existences. But this isn’t that. Storks is a PG-rated children’s film warning them about becoming emotionally attached to anything because they will inevitably be let down. It works better as a wake-up call for adults to remove heads from asses and engage their kids. This is why some men and women in the audience laughed—they saw themselves in the parents with warped priorities and/or children enduring that pain. The children contrastingly starred with glazed-over looks, unable to truly embrace the storks as cute or cuddly while growing bored of a story that requires a cursory knowledge of adult life to comprehend.