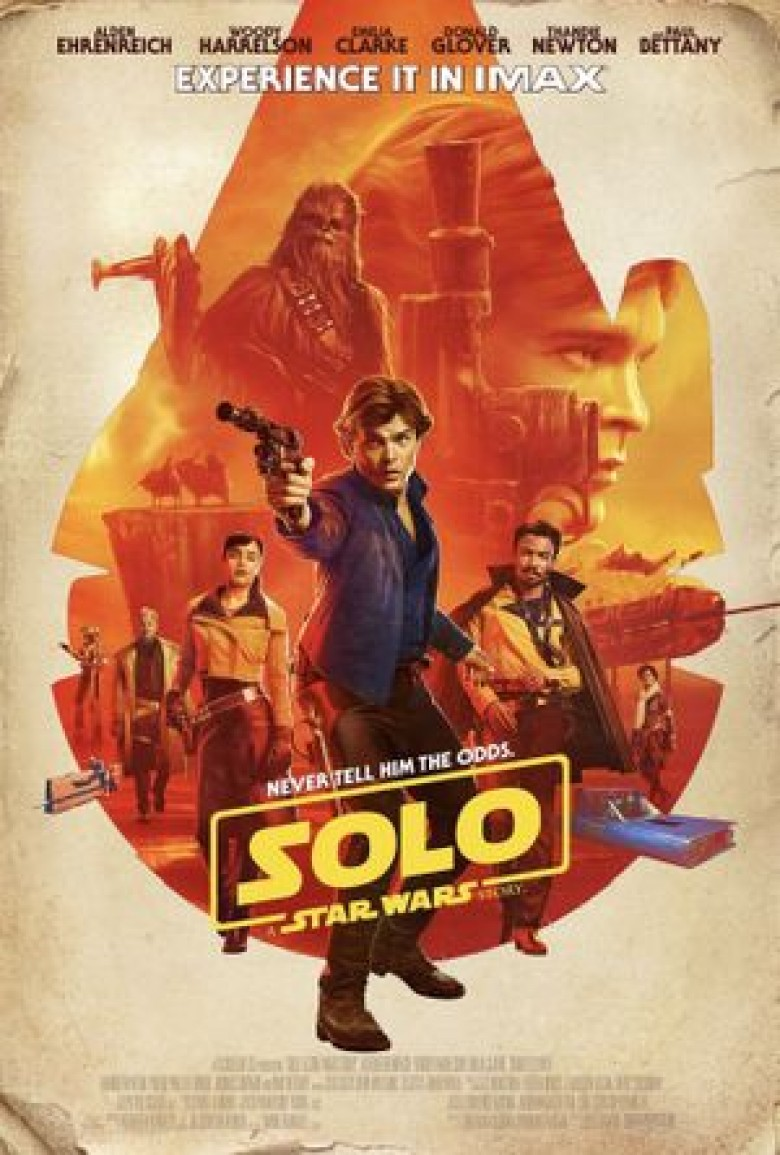 Nine movies into the cinematic world of George Lucas‘ Star Wars—three of which extend past his control over the franchise—and we remain tethered to the Skywalkers. It makes sense. In order for Disney to commoditize the property, they must first reconnect with old fans and familiarize the new. So they stuck with Luke, Leia, and Anakin’s continuing legacy (even if they threw out extended universe material once considered canon). They began with a rousing remake, continued with a spin-off expanding upon a moment we knew occurred yet were ignorant to the details, and branched off towards necessary politicized territory that finally supplied fresh intrigue (while also angering a frustrated horde of delusional “fanboys” believing they somehow own these characters). So what would number ten bring?

With a name like Solo: A Star Wars Story, you’d be right to think more of the same. With the mid-production firing of original directors Phil Lord and Christopher Miller to bring in a more grounded, conservative, and “experienced in Kathleen Kennedy‘s style of filmmaking” helmer by the name of Ron Howard, that thought would increase. Add a script credited to Empire Strikes Back and Return of the Jediscribe Lawrence Kasdan and his son Jonathan and you could start wondering if we’d somehow been collectively transported back in time three decades. But just because we know Han Solo and Chewbacca (now played by Alden Ehrenreich and Joonas Suotamo respectively), doesn’t mean the essence of a Skywalker tale will be retained. After all, they don’t possess the “Force.”

This isn’t a space opera with heroic protagonists and vile enemies from the Dark Side. Instead it’s a story about scavengers and scallywags, hustlers and smugglers out for selfish gain. They’re both good and bad—their code the only thing keeping them honest until dishonesty proves a better means for greater spoils. There’s a “big bad” so to speak with gangster Dryden Vos (Paul Bettany) threatening to kill whomever fails to deliver on a promise (or, more accurately, an ultimatum), but he lingers in the background as a figure to deal with later. Before that inevitable confrontation is an action movie with chase sequences, shootouts, and luck. One high-wire act leads to the next with escalating stakes, a revolving door of allies, and the looming certainty for betrayal.

The result is big budget, popcorn fun. Solo is the consummate blockbuster with so much to laugh at and get excited about that you’d be forgiven for ignoring how flimsy it actually proves. Everyone plays his/her part whether that’s dying to allow more screentime for the next players to enter the game (the only thing worse than fridging love interests as motivation for men is fridging them to simply make room) or surviving long enough to be a lesson. Because that’s what the whole was always going to be: Han Solo’s hard-knock education to transform his charismatic, punk dreamer in love (with Emilia Clarke‘s Qi-ra) into the jaded, uncouth cowboy we saw thaw during the Rebellion. How would that trademarked smirk turn from confidently hopeful to confidently snarky?

The answer isn’t as complex as I wished nor as smart as the filmmakers thought. It has some twists and turns that are always less surprising than narratively necessary with both a bunch of memorable characters in their unabashed one-dimensionality and inside jokes with visual cues and fan service foreshadowing, but there’s no heart. There’s no hook to care about anyone knowing what we know: that Han and Chewie are alone when they collide with Luke and Leia. The characters are simply going through the motions, hitting manufactured checkpoints along a path made less interesting by an unexpected cameo showing Disney’s hand as far as being too cute for their own creative good. It’s enjoyable, but this saga used to be iconic. Now it’s merely become an aesthetic.

And that’s ok. Why not use that backdrop as a skin on different genres? We’ve received our spy thriller (Rogue One) and now our actioner. Soon will come the romantic comedy and the horror film and all will be cool to see in the context of “a galaxy far, far away,” but stunted by their hollowness. That’s why I’m excited for Rian Johnson and Jon Favreau‘s trilogies being supposedly unbeholden to this arc (although the time to hire a woman or person of color is long overdue). I’m excited for someone to do what Lucas did instead of simply beat a dead horse knowing that nostalgia equals profit. Han is a fan favorite, but his most interesting period was the one we already saw with Harrison Ford.

Maybe Lando Calrissian (Donald Glover) could be mined for sordid adventures, but he’s just comic relief and the man with the ship here. Career criminals Tobias Beckett (Woody Harrelson) and Val (Thandie Newton) ooze intrigue, but it’s squandered in order to relegate them as guides rather than equals with histories of their own. Lando’s first-mate L3-37 (Phoebe Waller-Bridge) can’t even shine because her sentient fight for droid rights is utilized as a punch line rather than the important political statement in a world currently being overrun by the Empire it should. So many worthwhile threads are presented without payoff as though inclusion in theory is enough. We’re just supposed to “have fun.” And we do. But that fun doesn’t stop us from acknowledging what could have been.

The most captivating character is Qi’ra, but we can only hear “You don’t know what she’s done” so many times before growing numb to the possibilities. So we go along for the ride and enjoy Han’s antics making friends, enemies, and good on the legends we’ve heard countless times before. The opening chase gets the blood pumping and the subsequent train heist contains enough moving parts to keep our minds racing as to how they’ll all escape alive (or not). A welcome deep dive into the delicate subject matter of those tragic souls left in the Empire’s wake arrives as more teaser for potential sequels than anything else, but maybe that’s enough for now—or it would be if a full Solo Trilogy was announced to earn expectation.

All I can say for certain is that Ehrenreich and Glover are delightful. They do their counterparts (Ford and Billy Dee Williams) justice while also making the characters theirs. I’d have liked more depth with the latter (his moment is wasted by the plot needing him to bottle his emotions too fast for the impact of what occurs to have weight), but he’ll probably get his shot to lead soon. This is Ehrenreich’s film and he delivers the goods whether or not the script does him any favors. Credit the Kasdans for letting the antihero we know come through when appropriate, though, because that edge is necessary to combat an otherwise abundant well of effusiveness. It’s not enough to lift Solo beyond fluff, but maybe it’s a start.