Review: Sleeping With Other People [2015] 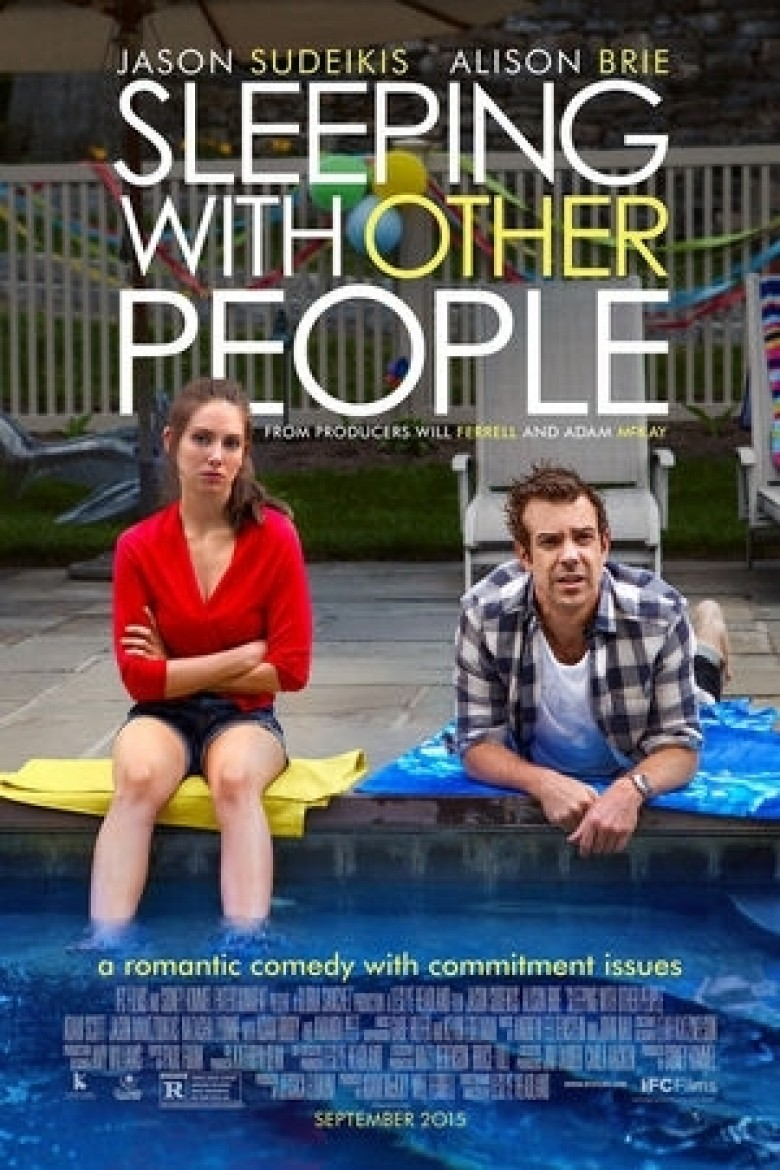 It has to overcome a pretty shaky start—mostly due to leads Jason Sudeikis (Jake) and Alison Brie (Lainey) playing Columbia undergrads—but Leslye Headlands‘ comedy Sleeping with Other People does prevail as quite the breath of fresh rom/com air. The plot isn’t groundbreaking, reconnecting two people twelve or so years after losing their virginity together for platonic shenanigans masking an underlying romance, but it does it with as much care for their tumultuous psyches as it does the inherent humor. When these two characters get on a roll their rapport is breathlessly rapid fire and absolutely hilarious in a highbrow, reference-laden way. But even as we’re guffawing, the potential for a panic attack to strike and show exactly how debilitating love truly can be is never hidden.

This fact actually makes that opening even worse because it’s so joke-y and juvenile in comparison. There’s purpose to this being that both characters are much younger and completely oblivious to sex or love, but having something so tonally different at the start risks losing your audience before the meat and potatoes even begin. Luckily the fast-forward comes quickly with two entertaining break-ups courtesy of early-thirties Jake with Hannah (Margarita Levieva) and Lainey with Sam (Adam Brody). The way each spins out of control is fantastic: Sudeikis doing his best to tell his “casual” girlfriend she’s actually mad at her best friend and not him for sleeping with each other as Brie works through her debilitating anxiety to end it opposite Brody’s impeccably boisterous over-reaction.

Headland uses these implosions to entertain and educate us on how damaged both have become since their night on the dormitory roof. He’s grown to embrace the label of womanizer, telling himself he’d stop if he found the right girl. To him his cheating is merely a delicate way to break-up with someone to which he sees no future blossoming. Rather than say, “I don’t like you,” he lets them hate him for sleeping with their sister. Lainey is different since she believes she’s found “the one” in Matthew (Adam Scott). Unfortunately, he wants her as a treat and not the person to come home to each night. And his wanting her most when she’s getting serious with someone else never fails to derail any emotional progress.

It’s at this crossroads—newly (officially) single—that they run into each other for the first time since V-day. Neither is at a place for a relationship so they agree to be friends. It’s not surprising they’d become best friends too considering the “unknown sex factor” is known and they have no problem being candid with the other since neither can judge. They become confidants, cultivating a truly deep connection without the messiness sex risks introducing. But as their union grows stronger and their self-esteem and maturity improves in turn to make a meaningful outside relationship possible, the process of beginning one comes via a bumpy road wherein they find themselves wanting to still discuss their troubles with each other rather than their beau.

You can guess the trajectory they subsequently follow through to a series of false finales where black screens reveal yet another epilogue (I like how it finally ends but won’t lie by saying I don’t wish the second proved permanent), but that’s okay because the plot isn’t as worthwhile as the characters themselves. Headland pulls no punches with either, going so far as having Sudeikis explain to Brie the process of female masturbation on an empty juice bottle—a scene with such authenticity in humor and feeling, complete with periphery conversations sidetracking the lesson, that it proves the film’s best moment for its honesty rather than sexual comedy. That’s nothing to sneeze at either since theatres are full of hollow laugh-fests that forget heart actually enhances their means.

I chalk this up to Headland’s background as a playwright. Her characters are three-dimensional despite lowbrow subject matter because we experience the scenarios Hollywood comedies exploit and those onscreen should react accordingly. When Lainey’s date with Chris (Marc Blucas) forces a run-in with Matthew and his wife, we anticipate a nuclear bomb dropping. But while the generic fare we usually receive would catalyze a catfight or the massive destruction of their aristocratic locale, the truth is much more heartbreaking. To watch Brie escape with her fake smile before breaking down in tears in the bathroom is devastating. The same goes for her public panic attack when Matthew calls her and Jake takes the phone. Removing his psychological hold on her isn’t a subject to be taken lightly.

Neither is the stuff Jake must fight—even if his ordeals are generally more surface. His flirtatious personality hampers his friendship with Xander (the brilliantly manic Jason Mantzoukas) and risks trouble at work with his constant advances towards boss Paula (Amanda Peet). He has an endearing charisma, though, so any rebuke comes with a smile rather than look of disgust. This means he can simply move on to the next prospective conquest without any emotional hang-ups freezing him in place like Lainey. Only when he realizes she is his hang-up do the stakes grow higher. Because not acting on those feelings puts the people he will let into his life at risk for the bottom to fall out when he finally does. Love’s too complicated for wholesale happy endings.

With so many supporting actors and laughs, it’s tough to believe Sleeping with Other People is actually a must-see showcase of Sudeikis and especially Brie’s talents at dramatic gravitas. His Jake’s pragmatism keeps him mostly in the position of “the unfazed rock,” but there are a couple moments where he lets loose with the truth before coming close to breaking down himself. Brie, however, is radiant in her complexity. We see her internal wrestling matches and second-guesses ending in actions she can’t quite bring herself to fully regret through the filter of her love. Lainey’s evolution is something everyone should witness to understand how powerful love is in involuntarily shaping our identities. Her increasing strength is inspirational as she slowly steals back control of body and heart.