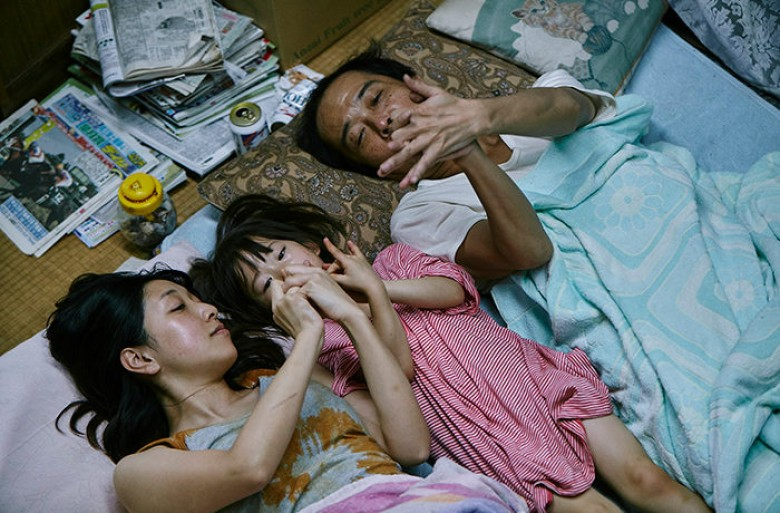 When times are tough, you improvise. Look at the Shibata family for example. Osamu (Lily Franky) and Nobuyo (Sakura Andô) both work part-time jobs to bring home meager earnings that can be added to the pension Grandma Hatsue (Kirin Kiki) collects as a result of her husband’s passing. They also have her home to share with Aki (Mayu Matsuoka), her older granddaughter, and Shota (Jyo Kairi), Osamu and Nobuyo’s son. It’s a cramped lifestyle, but workable thanks to their collective ambivalence towards stealing. Nobuyo has no qualms taking things she finds at work, Hatsue shrewdly visits her late husband’s second wife’s children to “pay respects” and collect sympathy checks, and Osamu has taught Shota the tricks necessary to avoid cashiers whenever they’re shopping for food and other provisions.

In lesser hands than writer/director Hirokazu Koreeda, Manbiki kazoku [Shoplifters] would ask us to either pity the Shibatas’ impoverished plight or call them out for being criminals. The way he presents them, however, has us basking in their independence, love, and joy. These five are happy despite their shortcomings because they refuse to rest and let the system keep them down. They choose to instead work that system and capitalize on the lazy indifference of the bureaucratic peons who are paid to keep it churning. So they hide when Hatsue’s landlord comes for a visit—living alone stops him from throwing her out. And they make games out of simple scams to see what they can procure with a little ingenuity and a fearless loyalty to each other.

Only when Osamu and Shota come across a five-year old girl alone in near sub-zero temperatures does the reality behind this carefree façade get revealed. Yuri (Miyu Sasaki) is quiet, but desperate. She’s thankful for the warmth provided, but unsure whether to trust these strangers with the truth. So she deflects questions about the scars on her body. She clams up when conversations approach a point-of-no-return as far as that evidence of abuse risking her becoming an orphan if discovered by the authorities. Osamu and Nobuyo get a taste of it first-hand when attempting to bring her back home, though. They hear Yuri’s parents screaming and fighting. They hear the words, “I didn’t want to have her either.” And they turn around to take her back with them.

Nobuyo shakes off the ramifications of putting her under wing with the flawed notion that it’s not kidnapping if you don’t ask for ransom. So they give Yuri a new life without the fear she once let consume her. We may not quite understand what it initially means when the girl stands still and repeats “I’m sorry” three times before being told to stop, but such conditioned responses are the product of devastating circumstances. The simple fact that we’re certain Yuri will be safe with this band of miscreants willing to shield her from her past says everything you need to know about the Shibatas. They may exist in society’s gray areas, but they would do anything for one another no matter the stakes. Their bond is unbreakable.

What’s that bond made of, though? I said Yuri’s entrance reveals the Shibatas’ reality, but it’s less her presence than Koreeda’s decision to start letting them be candid for the camera. Tiny details like Osamu trying to get Shota to call him “Dad” arrive out of the blue because we assumed he was. Hatsue speaks with gratitude that she won’t have to die alone as though the others are doing her a favor by staying there rather than she for them. A question is asked of Aki about why she uses her sister’s name when performing in sex booths, but that name is not Nobuyo. So who is related to whom … if anyone? Are they together because they were criminals or did they become criminals by coming together?

The great thing about Shoplifters is that those questions are hypothetical despite their concrete answers. We will discover explanations by the end (thanks to a tense left-turn in tone and presentation via scenes of interrogation) and yet everything we learn is inconsequential when compared with what we already know thanks to an hour and a half spent at their side. It doesn’t matter what they’ve done in their past or what an adversarial relationship with law enforcement makes them do pragmatically in moments that demand emotion because we’ve seen the love they’ve shared. We’ve seen them save each other with smiles, hugs, and extra gluten cakes. We’ve seen them bask in the glory of family regardless of whether others would define them as anything but.

So things can’t help escalating dramatically when the police inevitably knock on their door. Everything they are accused of doing is legitimate and yet we wish we could enter the screen and serve as character witnesses to defend it all. On paper they deserve punishment. And when the fantasy of their life is burst to reveal amoral truths previously brushed off for a sense of the greater good, they also acknowledge that punishment is probably deserved. But things are never that simple. While what Osamu and Nobuyo provided Shota and Yuri might not have been conventional, one could argue it was light years better than what they would have had without them. While they and Hatsue may have operated with ulterior motives, we know their hearts were pure.

That’s why the final act is so overwhelming. After enjoying the fun camaraderie shared and the poignant moments of honesty that cut through the fallacies of societal norms, the direness of the Shibatas’ situation at the end could very easily have felt manipulative. Things turn on a dime so fast that you will get whiplash if not for the voice in the back of your head desperately screaming back at the detectives off-screen that what they’re saying isn’t the full story. These people we have grown to cherish and empathize with as flawed epitomes of humanity’s virtue are suddenly separated to be told truths the film had trained us to believe weren’t that bad. To see their reactions, though, proves they are worse. Sometimes good deeds cannot outweigh the lies.

Even so, those deeds still mean something because they aren’t done for recognition. What these characters do for one another may not ever be given its correct context, but it mattered. It literally saved lives. Seeing Yuri’s face when Nobuyo shows her what a hug is or watching Hatsue mouth “thank you” as the lot of them run towards the beach are images we won’t forget. The tears these heartfelt moments conjure are more impactful than any laughter or surprise or forgiveness we supply the rest of the way. We know that they know what these months meant regardless of their bittersweet ends. People do what they must to survive and go even further for those they love. Hard consequences only prove it was worth the trouble.