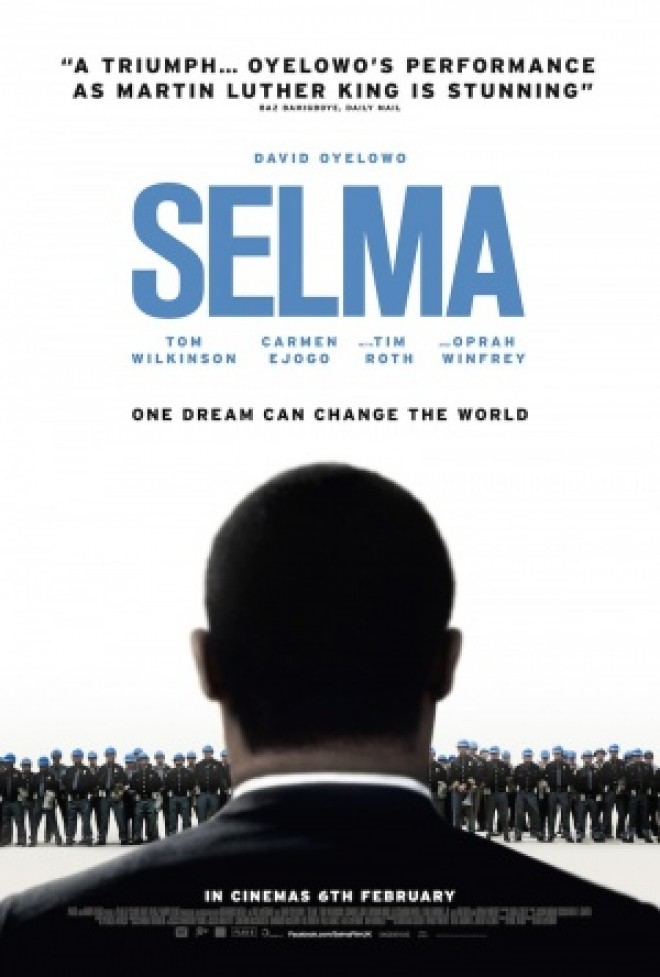 “God was the first to cry”

A civil war waged on Alabaman soil in 1965 whether President Lyndon B. Johnson felt holding off on a bill negating the South’s tactics to bar African American citizens from voting would prevent one or not. It was fought under his and the country’s eyes in the streets, on TV, and in their hearts. Finally someone proves brave enough to show it by throwing convention aside to stop treating cinematic historical biographies as revelry for the deceased heroes who helped make our country great. Selma may star Martin Luther King, Jr. and center on his actions as general of a free populace fighting for that exact freedom, but it’s not his story. The film is about the brutality of violence, the strength of peace, and the fallen soldiers who perished in a grotesque ambush so others could survive.

Director Ava DuVernay lets Paul Webb‘s script play out in its heinous detail because we shouldn’t be shielded from the truth. Just as we watch Allied combatants fall on the beaches of Normandy in a mass of chaos and carnage, so too should the battles fought on native ground be depicted. It’s not about saving face or shining someone in a kind light because of what they eventually did. It’s about teaching new generations of children what sacrifice is beyond a far-off notion of terrorism. How timely too that the fiftieth anniversary of what these men and women did by marching from Selma to Montgomery comes at a fresh moment in our history of police brutality and racially motivated violence. To say we’ve come a long way isn’t incorrect, but we’re definitely not close to finished.

If you look at the marketing materials and subject matter itself, you’re probably assuming a ticket buys you the opportunity to watch emotionally manipulated pantomime on the big screen that’s most likely better suited for prime time movie night on basic cable. I did. It’s no mistake then that DuVernay ushers us into the past at an instance of celebration where the guest of honor can’t help from questioning the clothes he wears and how they project upon his image as a man of the people. Besides being lensed at artistically framed angles in close-up to cultivate an almost documentary aesthetic by Bradford Young, the opening plays directly into those preconceptions. Transitioning to schoolgirls in church as they talk about Mrs. King’s hair therefore only elicits a sigh at its conservative homogeneity. And then DuVernay rocks you awake.

What a bold stroke of sensory genius on her part to lull us into a false sense of security before slapping us in the face with the reality that Selma is not your usual biography. It’s not merely about showing us a newspaper headline and seguing to King (David Oyelowo) conversing with President Johnson (Tom Wilkinson) about what they can do to stem the bloodshed in a state standing firm against federal laws for equality courtesy of malicious technicalities. We need to see innocence destroyed without remorse. We must witness the cavalier attitudes of men with the power to stop it jockey for position with proposed compromises and Band-Aids rather than simply do what’s right. Because what’s the point if we aren’t left speechless, helpless, and enraged enough to follow King into the fire?

The best true-life tales are those that don’t sugarcoat and never sanctify. Martin Luther King is not made into a saint here for any means of legacy for legacy sake. He is called out as a man who strayed from his marriage, shown as a smoker possessed by a temper he cannot always control, and a human soul filled with doubt and guilt once the death toll rises to only one. This is why I call him a general pontificating on the battlefield to inspire his men, women, and children to walk with him in peaceful accord right up to those who wish to do them harm. His actions are never made lightly and every misstep or loss as a result of them is personally placed on his shoulders as their leader.

It’s a magnificent performance from Oyelowo, embodying King as a man with faults rather than the pillar of perfection so many would love to embellish history to make fact. There’s a power in his words when he speaks at the church podium or in front of the Alabama Capital and unimaginable sadness with the news of each tragedy. He wrestles with his duties as a man of God, a husband and father, and the voice of an entire race looking for their next move forward. And no matter how unsure of his decisions he may be when internalizing the pros and cons in the moment, Oyelowo makes certain the determination and confidence necessary to embolden his followers is present when speaking to them or on their behalf with LBJ. After all, every second is potentially his final breath.

While he’s the lynchpin to the cinematic endeavor, however, DuVernay has her cast and crew at the top of their game in support. Some compositions are gorgeous in their ability to draw us into the claustrophobic edges of the screen. Whether King in jail talking to his wife Coretta (Carmen Ejogo) in profile against the bars at far right while an empty wall sits behind him in the other three quarters of the screen or Governor George Wallace (Tim Roth) sitting on Johnson’s couch with similar effect, our eyes are forced into a corner with no way out. It’s an aggressive visual aesthetic for an aggressive film refusing to placate to detractors crying about “fair portrayals” when they really desire flawless spotlights. I’m not sure Webb and DuVarney could have been fairer in showing the fallibilities of men.

As for the other actors: Oprah Winfrey shines with Annie Lee Cooper’s selfless conviction, Wendell Pierceexcels at some comic relief until his Reverend Hosea Williams takes point in the fight’s most nightmarish hour, and Keith Stanfield‘s portrayal of Jimmie Lee Jackson will bring tears to your eyes or rage to your belly before and after his inexcusable fate. Ejogo shows an authentic range of emotion as her husband’s rock in spirit if personal revelations prevent it physically and Stephan James‘ John Lewis provides inspiration for us all. They’re each thrust into the throes of war whether inside the gas clouds and at the end of a billy club to the skull or watching between frightened fingers at home. It must be graphic enough to cover your face because it was. Pretending differently does no one any good.