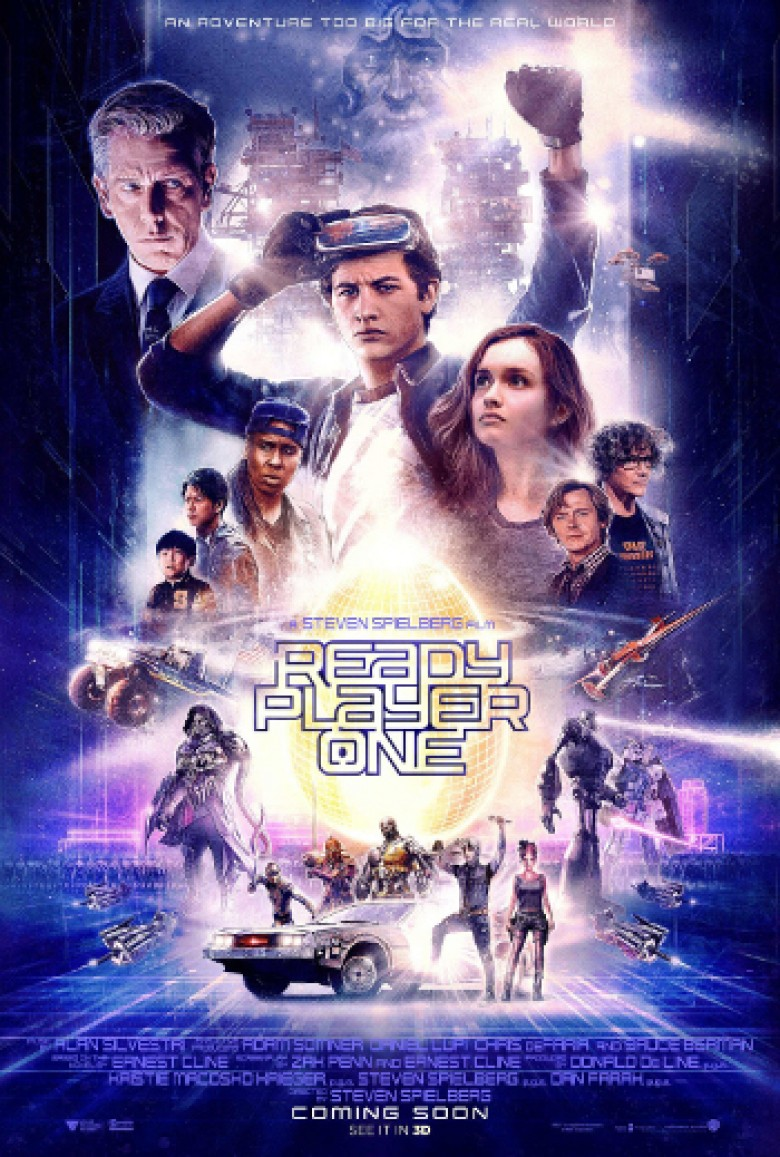 You can’t help but drown within the pop culture vacuum of Ernest Cline‘s Ready Player One while reading. He throws references left and right—most often for no other reason than to namedrop as though he’s racking up geek-cred points within a nonexistent game. There is such an influx of information that you begin to see just how flimsy and redundant the plot behind the superficial artifice is in its reworking of common dystopian tropes utilized to bestselling success in the YA world. It’s a thin veil similar to the one gamers like Wade Watts construct in the real world to mask their fears and insecurities while championing their fantasies not only of being a hero, but also of  getting the girl for no other reason than wanting her.

As such, it can read like a #GamerGate MRA manifesto meant to saint the stereotypical type of person who no longer deserves empathy. It glorifies the sort of “nerd” who appropriates the toxic masculinity of his aggressors rather than surviving its onslaught. Here’s a teenager who looks down on others with identical interests because they are posers or n00bs. He’s a gatekeeper who wields pop culture like sports fanatics do football or baseball—poring over statistics, dates, cheats, and influence to find an edge and look smarter regardless of whether he wins. Wade Watts is given what he wants easily, only to have it taken from him as a means of fabricating an evolutionary arc that does nothing but allow him to take back what he lost whether or not he is worthy.

So how then does a problematic work like this find its way into movie theaters let alone be brought there by Steven Spielberg? In a word: nostalgia. The novel became a phenomenon not because it gave voice to an underserved demographic—if anything it gives voice to that demographic’s worst sub-section—but because it trades in the commoditization of intellectual property that has touched our hearts and souls at one point or another. It pretends to be about a world not unlike ours that’s under threat of global commercialism while wielding that threat’s tools of marketing and sales to win its audience. Rather than let a conglomerate takeover the virtual reality interface known as the O.A.S.I.S., Cline imbues it with free advertising via pop culture callbacks.

How would Spielberg and screenwriter Zak Penn improve things? Would they augment the politics within Cline’s work to give his message a more concrete focus and perhaps acknowledge what’s wrong with the culture it celebrates? Or would they simply tweak things here and there to capitalize on the source material’s fame? They actually did neither. Their Ready Player One more or less strips Cline’s novel down to its barest bones: reality is a drag, everyone wants an escape, and game developer genius James Halliday (Mark Rylance) created one before announcing a scavenger hunt with a prize consisting of its ownership upon his death. Spielberg and company rebuilt that premise from the ground up as a fantasy action adventure. They’ve erased the elitism and replaced it with fun.

This is both good and bad. It’s good because it glosses over the problematic stuff to focus on a worthwhile message of teamwork—something the book offers as a last resort rather than as position of strength. It’s bad because it becomes a hollow romp devoid of substance beyond self-improvement rhetoric. If there was one thing I liked about Cline’s book, it was the puzzle of it all. While the three gates Halliday’s Easter Egg hunters must solve were high-concept spectacle, the journey to find the keys opening their locks weren’t. The intricate pathways to each in text are absent as the keys and gates get combined into CGI-extravaganzas of attrition. The pixelated Willy Wonka allusions are replaced by all-out rebellion to expose how shallow the plot always was.

To be honest, though, this was the film’s best avenue. It’s moving into a visual medium driven by action, and Spielberg complies. He even pushes videogames to the background by removing overt references to text-adventures and tabletop RPGs completely. The opening challenge plays like an insanely chaotic Mario Kart, but King Kong and a Jurassic Park T-Rex populate it for cinematic flavor. A majority of Halliday’s past now hinges on a theater-going experience and Spielberg leans heavily into what it would be like to exist within a movie itself—not to lip-synch lines like the book, but to move about freely. Wade (Tye Sheridan), Art3mis (Olivia Cooke), and their allies (Lena Waithe, Win Morisaki, and Philip Zhao) might be playing a videogame, but they’re inside a movie.

As such, they aren’t separated by geography, either. The film isn’t interested in the idea of spending your life in a simulation because isolating its characters does its narrative propulsion a disservice. So Spielberg and Penn lean heavily into the notion of war by putting all their soldiers in close proximity to the others. These “gunters” (Egg hunters) led by Wade aren’t school-aged teens anymore—they’re a new generation fighting against the errors of those who came before them. This also means that the story is less concerned about solving Halliday’s mystery than it is in the confrontation between new and old guard. So main antagonist Nolan Sorrento’s (Ben Mendelsohn) corporate leader hell-bent on claiming the O.A.S.I.S. as a money-making scheme isn’t alone. He has henchmen to order around and fail.

Enter a reworked character from the book: bounty hunter I-R0k (T.J. Miller in a fully motion-captured role that could have been recast amidst controversy spanning transphobic comments and alleged sexual harassment) and a brand new character in Sorrento’s emotionless security head F’Nale Zandor (Hannah John-Kamen). The film needs them because it’s decided that brute force conflict is more attuned to blockbuster fireworks than the subdued hunt of the book. It uses them to increase animosity and bring the fight to the real world, too. In doing so, however, any chance for character development is thrown out the window. Wade, At3mis, Aech, and the others become interchangeable heroes trying to save the world. Their actions become rushed imperatives serving the plot rather than any struggle towards personal depth.

In the end, it all works to create an entertaining if overwhelming visual assault of empty rebellion between idealistic kids and the oppressive regime attempting to destroy their freedom. It clumsily shoehorns in its message of “reality is real” despite its failure to delve into why it’s relevant when the action of a death match proves easier to accomplish than a strategic undertaking. Spielberg has kidified his Ready Player One in this way—dumbing it down to simply ignore why it was problematic, rather than fixing it. He’s removed the stakes that necessary deaths provided, blindly embraces hope, and delivers a children’s film with rampant swearing (including a well-placed f-bomb) to target a sweet spot, where nostalgia-craved adults can bring their tweens without worrying too much.

It’s definitely not the book—and that’s good. Unfortunately, however, it’s not a great movie either. But it is kinetic, at times exhilarating, and a cool exercise in visual pastiche with Easter Eggs everywhere, courtesy of posters, vehicles, and avatar identities. In those terms, it’s a success and perhaps better-suited to becoming an interactive videogame than a point-A to-point-B movie, in which everything outside of the plot ends up being more captivating than the characters’ arcs. There’s a sequence that takes place entirely within one of my favorite movies that’s unforgettable, even if the smile it conjures is for the technological achievement rather than its place within the whole. The film’s superficiality, therefore, bores and excites in equal measure for a Hollywood tent-pole that will quickly evaporate from your memory.