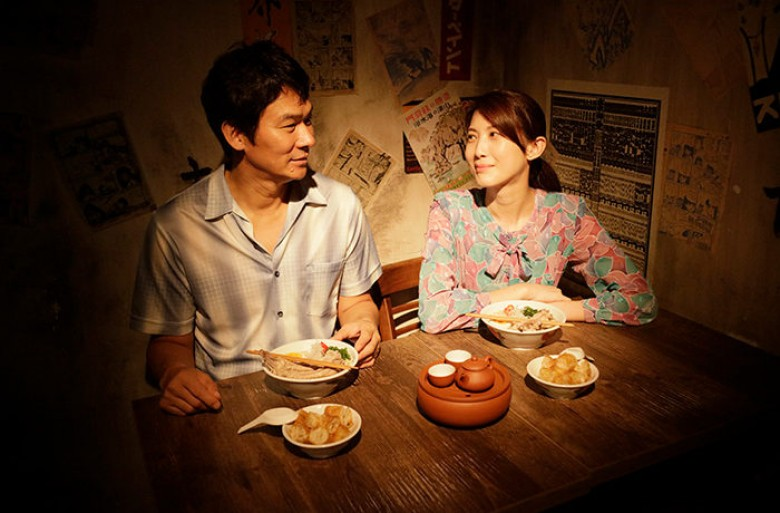 “He kept her memory alive with every bowl of ramen”

While Eric Khoo‘s Ramen Teh [Ramen Shop] is at its core a story about a young man looking to reclaim a part of his heritage that was lost, it’s also a rather poignant account of the lasting scars of war and the struggle to separate hate from love when two worlds collide. Because it’s not simply that Masato (Takumi Saitoh) never returned to Singapore after leaving with his parents at age ten. He wasn’t welcome there. Despite the country being a veritable melting pot of ethnicities with their unique palettes mixing to create new delicious recipes, Masato’s place within it had been stripped for some unknown reason. His mother (Jeanette Aw‘s Mei Lian) died before she could explain and his father (Tsuyoshi Ihara‘s Kazuo) unfortunately never stopped grieving.

So it was a foregone conclusion Masato would eventually leave Japan for his former home if for no other reason than to rekindle a relationship with his Uncle Wee (Mark Lee) and learn how to make his famed pork rip soup. That dish is what he remembers when thinking about his mother and the ramen his father and he sell at their restaurant simply never satisfied that psychological craving. Masato hoped his online friend Miki’s (Seiko Matsuda) packages of Singaporean spices could start to get him closer to bringing that memory to life, but it never quite proved enough. If she could take him around Singapore and perhaps find his uncle, however, he could merge the soup’s flavor with Kazuo’s ramen and honor Mei Lian everyday.

It’s not long after arriving, though, that Masato begins to acknowledge the rough history between his parents’ nations. Japan occupied Singapore (known as the Syonan-to) after the British fell in World War II. Many people died and the result caused an unavoidable strain for those who were affected. We can therefore start to imagine deeper-seeded reasons for why Masato’s parents took him away to Japan—reasons that will become clearer once Miki translates his mother’s diary and Uncle Wee sheds light on the particulars of what went on when he was boy. And while you may think using food as the catalyst to bridge such a historically dark divide seems a bit easy, it actually proves to be the perfect scene for common ground this family has.

Not only that, but having these dishes become so prevalent a plot point also allows Khoo to nudge screenwriters Fong Cheng Tan and Kim Hoh Wong‘s heartwarming tale of love overcoming prejudice into a visual smorgasbord of food porn. I do believe it will prove impossible not to find yourself checking your phone for the closest ramen shop near the theater as soon as the credits roll. Sadly, whatever restaurant you choose probably won’t have the wild stuff like chili crab or Indian curry noodles available for purchase. So you’ll have to live vicariously through the perpetual slurping of ramen and drinking of broth while pork boils for ten hours on-screen. Famed Singaporean chef Keisuke Takeda even makes a cameo and can’t get enough of Masato’s latest soup.

Beyond this aspect, though, is a well-constructed script with as much humor as heartache. Despite starting with a death, the latter’s amount may still surprise because Masato’s tour of Singapore cuisine with Miki (a relationship that works so well since it doesn’t fall prey to romantic ambitions—mostly) seems so far-removed from the historical context waiting in the wings. Once his grandmother (Beatrice Chien‘s Madam Lee) enters the equation, the real drama that kept him in Japan is brought into focus with a mix of regret, nostalgia, and hope for the future. Khoo utilizes flashbacks nicely to pull back and replay happy moments as sad and sad as happy once we learn the appropriate context to let such transformations land best. Masato’s return therefore becomes Mei Lian’s too.

Ramen Shop ends up simultaneously being a pilgrimage and exorcism. Masato is reclaiming a part of his identity that was stolen by frayed relationships and Mei Lian’s spirit is being cleansed of the guilt that had been projected upon her in life. That the lead discovers he’s a metaphorical Singaporean dish and thus as much a product of his parents’ love as the ramen he and Kazuo sold to countless Japanese customers is merely a happy byproduct of the journey. All the food is ultimately symbolic—manifestations of memory and culture to be passed down generation to generation. It’s something we don’t perhaps see these days with fast food fusion restaurants and limited time to cook ourselves, but so much of who we are is embedded in recipes.

That those flashbacks show how food brought Mei Lian and Kazuo together in the first place says so much because it separates them from the war their elders have yet to escape. Their cooking for each other proves more intimate than any conversation about childhood or ambition could because they put their heart and souls into these meals. Soon it takes one sip or bite for everything to come flooding back in an instant and so Masato’s new dish possessing enough of both worlds only enhances the experience further. Ramen should never have been a stand-in for Japan’s atrocities anyway since its own origins are steeped in Chinese cuisine too. And if those disparate flavors can mix so well, two people a sea away can too.