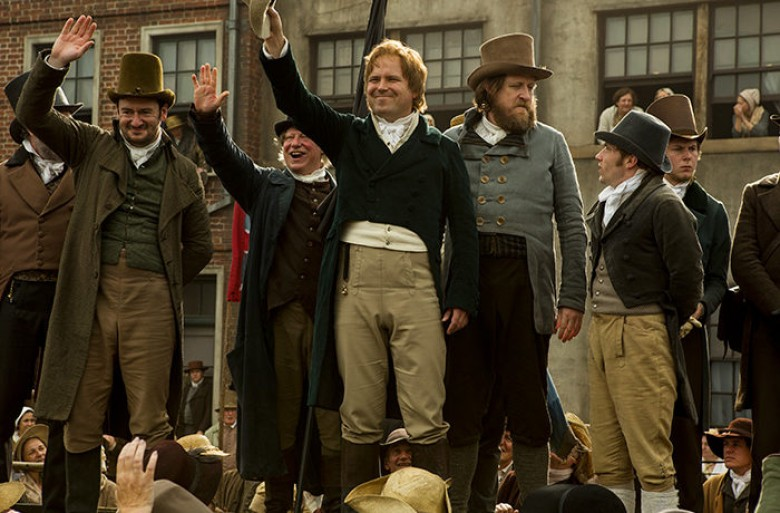 “Let’s see what he has to say”

Films devoid of main protagonists are generally created as such because the event orbited by their ensemble of characters proves the focal point instead. So when that central moment is a massacre, you must brace for the reality that many will end up victims left for dead. The filmmaker is therefore tasked with ensuring his/her audience recognizes the line between good and evil, just and immoral. Writer/director Mike Leigh accomplishes this separation straight away in Peterloo with his prologue contrasting a young, distraught soldier (David Moorst‘s Joseph) struggling to walk home to Manchester upon returning to England from the Napoleonic Wars opposite a decorated “hero” (Alastair Mackenzie‘s General Byng) greeted at Parliament with a new assignment that entails his quelling the rising sedition sparked within that same town.

We thus glimpse the common man and his impoverished family barely scraping by in Northern England alongside the London bureaucrats who appease their fat Regent and “Mad” King with wine in-hand. The former is imperiled by a growing economic depression circa 1819 that’s exacerbated by famine caused by the Corn Laws (tariffs enforced upon imported grain) while the latter simply continue to live in comfort. It’s a story of oppression, elitism, and greed that we’ve seen rear its head countless times during the history of mankind still to this day—one wherein those without embolden themselves to demand what’s theirs from those uninterested in sharing their spoils. This is “Liberty or Death” territory with radicalized citizens seeking a voice through Parliamentary reform, their fiery rhetoric meeting government-sanctioned brutality.

The event of the title left more than fifteen people dead and close to seven hundred injured out of the approximately sixty thousand peaceful protestors who arrived at St. Peter’s Field on August 16th. Britain sadly cracked down on reform even further afterwards with the Six Acts and thus its lasting effect wasn’t necessarily initially felt beyond those who were there or knew someone who was. So having a film depict the journey towards this unconscionable bloodshed is a rather important step to ensuring no one forgets what happened or who was at fault. That’s not to say Leigh doesn’t take liberties (his framing of the magistrates as over-the-top black-hearted men definitely reveals an agenda regardless of veracity), but its parallels to rising suppression today can’t help resonating.

Leigh takes us back and forth between protestors and government agents. On one side there’s businessman Joseph Johnson (Tom Gill) spearheading the event so community leaders (like Neil Bell‘s Sam Bamford, Philip Jackson‘s John Knight, and Ian Mercer‘s Dr. Joseph Healey) can address the people and disseminate information before also enlisting a special guest orator in the renowned land-owning and well-to-do reformer Henry Hunt (Rory Kinnear). On the other is Lord Sidmouth (Karl Johnson) cherry picking events to present to London with the desire to demand swift and punishing action as well as a quartet of haughty magistrates throwing poor Northerners in jail for minor offences if only to assert their control. Add spies inciting violence and it’s just a matter of designing a pretense to crack skulls.

While the format itself is perfectly structured to comprehend cause and effect whether big or small, how the content is delivered will frustrate some due to the massacre only taking up the final twenty-five or so minutes. The other two-plus hours consist of impassioned speeches and proselytizing. Knight’s firm but measured words open the eyes of younger revolutionaries (Nico Mirallegro‘s John Bagguley, Danny Kirrane‘s Samuel Drummond, and Johnny Byrom‘s John Johnston) with a sharper edge as far as what they’re willing to do to see real progress. The magistrates (Vincent Franklin‘s Ethelston, Jeff Rawle‘s Hay, and Martin Savage‘s Norris among them) bicker about how to handle the gullible rabble “threatening their lives.” And Mary Fildes (Dorothy Duffy) and Susannah Saxton (Victoria Moseley) recruit women to the cause too.

It’s all a steady stream of differing opinions and stances. Bamford loves the idea of Hunt assisting their cause, but the differences in their socio-economic backgrounds cause the latter to angrily dismiss anything the former says since he’s too set in what his notions for reform are removed from these people miles away. Johnson finds himself in way over his head once he becomes Hunt’s de facto handler forced to filter through only those locals his guest wants to speak with. And Norris tries to be a voice of reason amongst his fellow judges even if he too belittles those under his rule of law as readily as he takes breath. Some sentiments appear redundant, but nothing is spoken without meaning when taking relationships into account.

Above the words themselves are the reactions from those listening. Leigh is less interested in our being roused to our feet by empowering lectures than our being educated by the catty games unfolding behind the scenes. Whether its those in power gleefully putting their proverbial feet onto the necks of those who dare question their representation or a woman yelling at Fildes that she doesn’t understand a word coming out of her mouth, these characters are presented as larger than life entities put upon converging paths wherein emotion awakens as many as it condemns. Each is walking towards this nightmarish scenario that will eventually play out like something off the Discovery Channel with predators licking lips and prey running for their lives. Who dies and who signs their death warrant?

If following these people around to learn about the era’s conditions isn’t intriguing enough, the reality that they’re being led to an unavoidable slaughter can come off as manipulative at worst and anti-climactic at best. Once you realize there’s no reason to keep coming back to that young soldier’s family from the start besides ensuring tragedy will hit them personally, their presence loses its narrative propulsion. But that’s kind of the point. We’re meant to see them as examples of their brethren. Leigh is operating with generalizations that he’s personalized to expose the disparate motivations, unbridled cruelty, and unfortunate naiveté that must exist to let something so horrible occur. Peterloo is therefore less historical document than anthropological study and ultimately might say more about our present than its own.