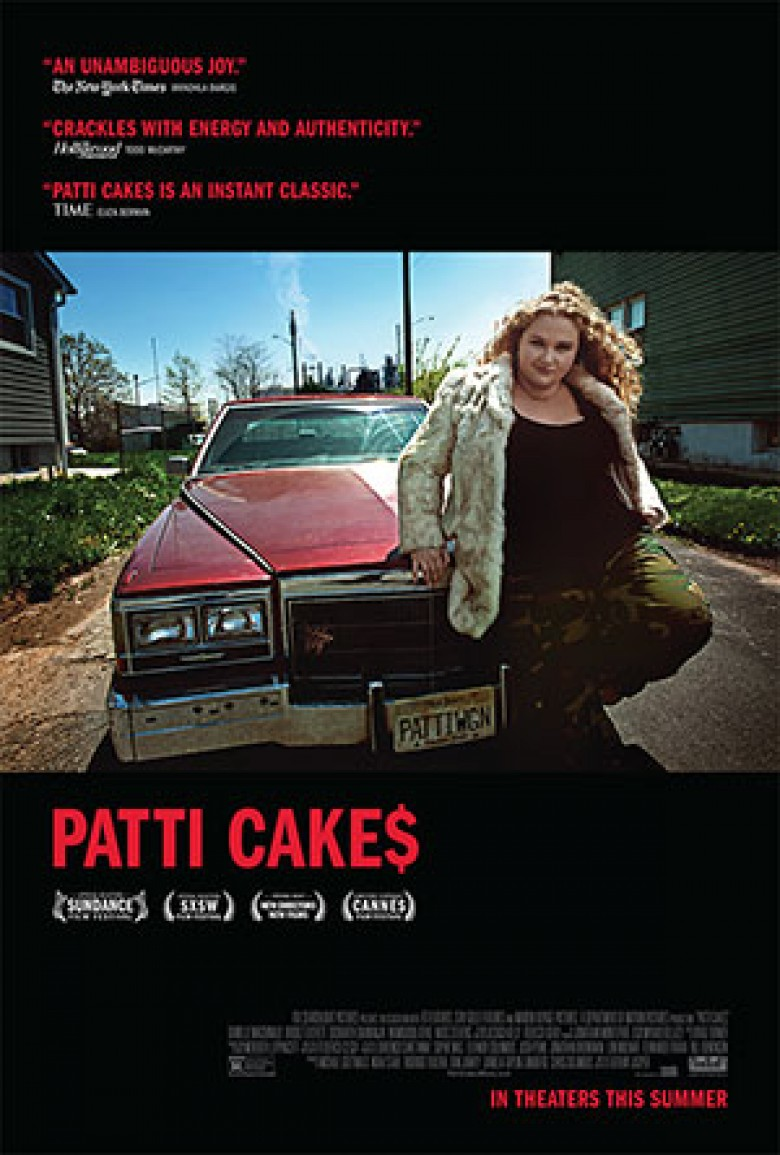 “Blood is thicker than Jäger”

If you ever watched Hustle & Flow and wondered what it might look like rebranded for a younger audience, Geremy Jasper‘s Patti Cake$ has arrived—with a side of cultural appropriation. Admittedly, this added “bonus” is a wild card attribute that has the potential to turn the whole very sour, very fast. Considering the main theme concerns being yourself and overcoming the adversity of bullies from all angles (family included), however, it does ultimately work. You could tell a similar story set in a black neighborhood with black lead characters, but it wouldn’t be the same story, since the notion of removing rap music’s stigma is as prevalent as removing that which follows the girl everyone calls “Dumbo” Dombrowski. Patti’s (Danielle Macdonald) journey is about art’s cathartic power.

Patti is a poor white girl in a poor white neighborhood. Her mother (Bridget Everett‘s Barb) is a could-have-been '80s hair band vixen turned hairdresser with her face in the toilet of the bar where Patti works each night. The cops are quick to break up rap battles in parking lots between white kids before harassing the one black dude who’s silent in the background with hands in pockets. And everyone has an opinion about how a young woman like Patti should look, act, and feel despite never having the decency to respect her opinion on the subject. Everything hinges on this twenty-three-year-old bartender’s ability to payoff her grandmother’s (Cathy Moriarty‘s Nana) hip surgery bills. She might be the responsible one, but her dream of stardom remains.

That sees “Killa-P” and her homeboy “Jheri” (Siddharth Dhananjay)—better known to his parents as Hareesh—spitting rhymes to the beats in their heads while waiting for a chance to hire a producer who won’t laugh them out of the booth on sight. After cajoling the “scary black dude” anarchist who lives behind the cemetery and plays doom metal to the vitriol of every white-boy poser in town into joining their motely crew, PBNJ is born. And dare I say the music is good, enough so that every heckler either shuts up or gets mad as soon as they prove their worth. Sadly it’s all still a dream with one true blue believer in Nana, a woman who would support her granddaughter no matter what she decided to do.

But Patti Cake$ isn’t about whether they find success, get signed, or ultimately break-up. Much like Hustle & Flow, this tale shows its lead character’s growth as a person outside of the shadow she provides for herself. Patti has to combat so much in the real world with a-holes calling her “Dumbo” to her face that coming home to more of the same is demoralizing. What’s worse is that Barb had the same fantasy, one she’s never been able to let go of. Think about it. This woman had the potential to hit it big with a musical style that could objectively be labeled crappy—yes, I love '80s ballads as much as you despite this—and somehow has the gall to dismiss her daughter’s love for rap.

This is why the film’s cultural appropriation works. It treats rap as an art form, poetry. While Patti’s mother and her police friends unironically claim that rap is ruining the world, Patti is using it to heal psychological and emotional wounds. Patti’s words may have bite, but they’re also true to her soul and situation. While Jheri spins out of control into his faux gangsta style (a brilliantly stark contrast to his clean cut drug store pharmacist alter ego) and “Bastard the Antichrist” (Mamoudou Athie) sullenly stands stock still with an oft-stoic remark delivered in his quiet, deep voice, Patti is grinding. She’s not in this for the fame or the musicality as are the others. Rap is her escape—mentally and hopefully physically, as well.

The music is all she has to help her stay sane while her mother plays the fool, her grandmother sleeps the day away on Percocet, and her bosses treat her like crap. And as every serendipitous meeting with someone in a position to supply her with her big break witnesses what she has to offer, the music can prove to be her salvation as quickly as her undoing. The question becomes how much she wants it. How far is she willing to go when every single person surrounding her tells her she’s not good enough to do anything but make a mixed drink? Only when hitting rock bottom can she see what path forward is her fate. A struggle from start to finish, the smallest of victories becomes a taste of heaven.

Macdonald is amazing. Her relatable anxiety is palpable, whether she is screwing up or going hard for what she wants. The transition from panic to kicking ass can be a bit too abrupt at times, but the result is always a catchy beat paired with lyrics that are contextually relevant to the situation and her life as a whole. Her idols (MC Lyte‘s DJ French Tips and the Sahr Nagujah‘s Godfather of Rap O-Z) have varying reactions to who and what she is. One is unable to look past her physique and color to see the art. And her dream guy (amateur rapper Danny as played by McCaul Lombardi) risks becoming anything but as more and more of the film’s white characters expose how rap is only about image to them.

The result is a charming coming-of-age tale with an authenticity its premise may not at first appear to hold. Jasper seems well aware of how badly things can go and thus focuses on Patti’s trajectory as a bullied, marginalized person rather than as a potential rap icon. He lets the peripheral characters hit her with the harsh critiques we could easily project upon the movie so she can prove everyone wrong. Everett becomes an unsung hero, her mother possessed by too much self-hate and resentment towards her daughter to let love prevail anywhere but in her mirror. The climactic performance ends up being as cathartic for her as it is for Patti. And its portrayal of music as a galvanizing, hopeful force is infectiously inspiring.