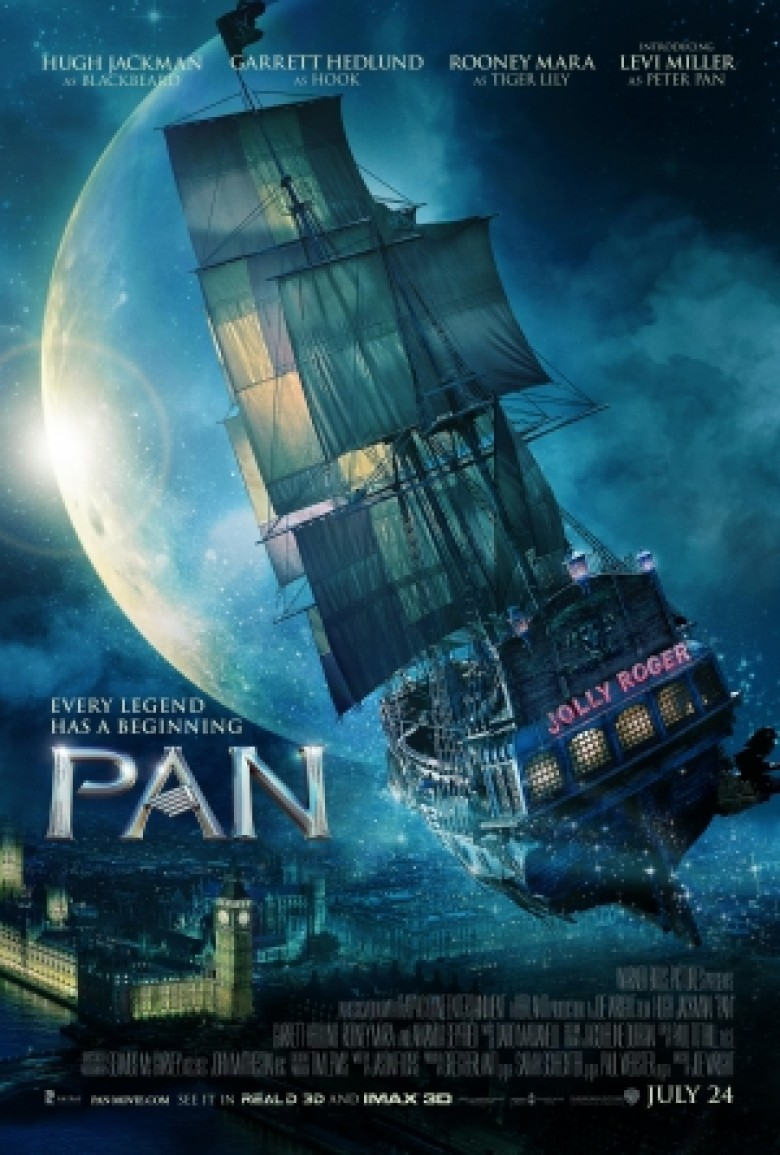 For whatever reason the American public has been fascinated with “origin” stories attempting to give meaning to some of the most iconic adversarial relationships in literary and film history. It’s not enough for the Wicked Witch of the West to hate Glinda or Superman and Lex Luthor to be arch-nemeses—we need to see how those relationships devolved from friendship. Sometimes people just hate each other, though, and there doesn’t need to be an Oz the Great and Powerful or “Smallville”to explain how once-friends turn ugly. Ostensibly both children’s stories, we almost want our kids to learn that their confidants are just as likely to become their greatest foes than retain BFF status come high school. Sadly, that result is somewhat of true.

Blacklist writer Jason Fuchs decided to throw his hat in the ring by giving J.M. Barrie‘s Peter Pan this treatment. With Pan he creates a prologue to show how Peter (Levi Miller) found himself in Neverland—bought into slavery—alongside the many characters he meets along the way. Hook (Garrett Hedlund) is therefore turned into an orphan boy all grown up in the fairy dust mines run by his dictatorial predecessor Blackbeard (Hugh Jackman). This dynamic makes it so Peter and Hook are allies seeking to find his mother (Amanda Seyfried) and an escape back to Earth respectively. It’s an intriguing conceit and one worth delving into as a creative writing exercise. Beyond that: I’m growing somewhat sick of this trend to cash in on product recognition.

Luckily we’ve seen good directors helm them so their visual style can intrigue when the unnecessary revisiting of a property already graced with the label “classic” doesn’t. I was surprised when Joe Wright chose Pan as his next film because it’s so different from what he’s done before—namely period dramas. Fuchs script introduces that world through its earthly World War II setting at an orphanage run by an evil nun (Kathy Burke‘s Mother Banabas), but once we soar through the clouds to Neverland the sky is the limit and Wright complies. Some aspects must remain close to canon like the Piccaninny tribe, mermaids, and crocodiles, but there remains latitude to skew them—beyond whitewashing Tiger Lily (Rooney Mara). (Her tribe is an otherwise multi-ethnic mix.)

While most flourishes work—I love the stop-motion aesthetic of the memory tree where its rings move in waves to mold the characters acting out their story and the astral dust of fairy recollections—some fall flat. The biggest loser is Wright’s desire to anachronistically use contemporary music during Act One. When Peter is kidnapped and taken to Neverland, the displaced orphans already resigned to their mining roles start chanting in honor of their master Blackbeard en route to greet them. Rather than a tribal song of sounds instead of words or an original piece of pirate propaganda, they’re caught singing Nirvana‘s “Smells Like Teen Spirit”. And when Blackbeard forces “traitors” to walk the plank, we hear them inexplicably shouting The Ramones‘ “Blitzkrieg Bop”.

This isn’t Moulin Rouge!, though—nor a musical. Besides two more short snippets that I didn’t recognize, this stylistic choice and singing in general is abandoned altogether. So why include it in the first place? The same goes with Hedlund’s fun if overly campy performance as Hook. It’s entertainingly over-the-top and perfect for a PG-rated kids adventure, but the rest of the drama is much heavier by comparison. Jackman’s Blackbeard, no matter how hammy, remains a bona fide villain to fear by contrast. Even Adeel Akhtar‘s Sam Smiegel (the usually comic relief in Pan lore) reads more dimwitted than wacky. His shenanigans fuel the plot and Blackbeard’s pursuit while Hedlund’s airs serve as a wink above story. It’s like Wright didn’t quite explain how dark his vision ultimately was.

If you get past these two glaring details, however, Pan is an effective return to Neverland. The nods and callbacks to previous iterations are subtle and unobtrusive, the creative visual workaround of a pirate on Piccaninny ambush’s death count beautifully sanitized (each kill resulting in a puff of smoke like a daytime firework rather than bloody corpse), and the main plot of Peter being the “chosen” savior of freedom feels relevant albeit tried and true. I enjoyed the simplicity of its inspiring message to have faith in oneself to accomplish whatever destiny you believe lays at your feet and the numerous failures Peter endures before owning his birthright constructs a welcome road of trials and tribulations. Fuchs ultimately got the spirit of Barrie’s universe correct.

With that said: is it necessary? The honest truth is no. I won’t deny that the journey is fun or that Miller shines in his feature lead debut, but it’s hard not to call it highly polished fan-fiction. Wright’s stamp helps and the imaginative bits do wow us in 3D—Bishop (Nonso Anozie) escaping a bomb-ravaged London for the vacuum of zero gravity space before plummeting to the island of Neverland is gorgeous—so not all is lost. Jackman is having a good time twirling his moustache and even has a few genuine heartfelt instances threatening to earn our empathy, Hedlund grins through his retooled Hook to ensure we forget the monster he’ll become, and Mara provides a good mix of innocent flirtation and warrior instinct.

However, the real draw of Peter Pan is our being bystanders alongside the Darling children to use this distant fantasy world as an escape. The same goes for The Wizard of Oz. These are metaphors wherein the same actors generally play multiple parts because those in Oz and Neverland are manifestations of the dreamer’s feelings towards someone in their real lives. I don’t like how creating a prequel to the fictitious characters renders the lesson of the original work somewhat moot. I know the authors themselves take these liberties too, but a property like Pan comes off as opportunistic because it knows fans like the dream and want to see more of it despite how doing so lessons the main intent and replaces it with surface bluster.