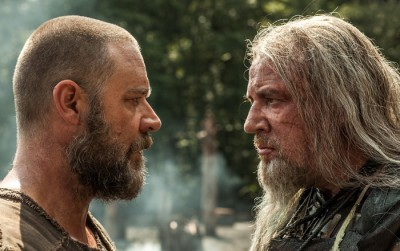 “Maybe we’ll learn to be kind”

Religion likes to talk about mercy, forgiveness, and acceptance as though such grace was instilled in humanity before we decided to ignore it for carnal pleasure, bloodlust, and greed. This is why most films depicting Biblical stories go heavy on angels and enlightenment, giving pithy parables with “a-ha” lessons to take stock and deflect from the copious amounts of violence throughout its text. Yes there’s creation, salvation, good deeds unto others, and heroes to aspire towards, but don’t forget deception, cleansings, sin, and damnation. The church can spout all day about shepherding its flock to an afterlife of white light and fluffy clouds, but we must remember it’s by their rules. Blasphemers, doubters, homosexuals, and many more have no place in Heaven and if scripture is true sometimes Earth as well.

Here’s the thing: if you make your film darkly bleak you’ll probably gain secular audiences while losing that easy religious-backed profit. If you give churchgoers the sunny version they delude themselves with to combat their inherent guilt, no one but them will care. I’m not saying successful movies based on the Bible didn’t exist before, but only when Mel Gibson said, “screw you” to taboo and made Passion of the Christ “authentic” did we truly see these stories’ potential. If you give an auteur with singular style and vision the opportunity to create art rather than commerce you will not only reap the reward of audience but also acclaim. That’s not to say commerce won’t also come into play, though. Would“>Darren Aronofsky ever have earned the chance to create his Noah before Black Swan? Hell no.

Just look at his history with passion projects steeped in faith. The Fountain was going to be big: Brad Pitt, Cate Blanchett, tons of money, and final cut. Pitt went Greek, the rest fell by the wayside, and eventually his vision—but not his spirit—was cut in half (it remains my favorite of his and Top Ten all-time). When Noah came to mind with cowriter Ari Handel around that same time, he knew it would be tough to muster support. So they turned the script into a graphic novel instead, putting it out there as a quasi-storyboard. And when Black Swan was noticed by the Academy, Paramount took the leap. Again Darren found star wattage, 130 million dollars, and creative control (despite all that rumbling months ago). This is his vision from start to finish.

Don’t let that and its trailer mislead you into thinking you’re about to get a grand new version of the epic nor some action-packed box office juggernaut throwing any semblance of the tale to the trash besides character names respectively. Yes, there are tweaks and flights of fancy, but it’s still the Genesis narrative. Don’t quote me on details since I haven’t looked at a Bible since my First Communion in second grade; just know the essence of its purpose remains intact. We see through abstract prologue the darkness and the light. Watch as Eden’s serpent sheds its skin for a test of treachery before witnessing a hand plucking a beating heart of an apple from its branch. Cain kills Abel, mankind turns evil, and only the line of Seth knows goodness. It’s here we meet Noah (Russell Crowe).

A young boy who sees man’s destructive ways first-hand, he grows off the grid and away from his species to live economically with his family—wife Naameh (Jennifer Connelly) and sons Shem (Douglas Booth), Ham (Logan Lerman), and Japheth (Leo McHugh Carroll). They do not eat meat; do not kill. They survive in the deserts left by what appears to be a post-apocalyptic wasteland, knowing the signs of man’s approach and ways to defend themselves righteously against their carnivorous foes. This is why his Creator (the word God is never uttered) entrusts him with a message through dream. He is to be the conduit on Earth to facilitate the coming cleansing by building an ark to survive the flood. Miracles will bring the animals two-by-two, sin will provide the evidence for their genocide.

Because while Noah and his family—now expanded to include a young girl left for dead along their journey (Emma Watson‘s Ila)—are doing the Creator’s bidding with help from fallen angels known as The Watchers (beautifully rendered rock monsters as far from symmetrical as possible), King Tubal-cain (Ray Winstone) and his people have arrived to steal salvation. They provide a mirror in which to look at how far from His image we’ve regressed. They beat into Noah the honest truth that Creation no longer includes them. For nature to sustain, man must be destroyed. He approaches this realization, accepts it, and holds the guilt of complicity until the weight breaks him further. The Creator spoke to him so he must decide humanity’s fate, the gift of life resting in his furrowed brow and defeated heart.

Aronofsky finds the complexity of this story beyond its children’s book cartoons of animals taking a journey across the sea before life begins anew. He sees a fallible creature in Noah—a man who’s willing to do whatever his Creator bids him as a penance for life itself. And while the first half of the film is familiar, the second re-embodies the lesson at hand into an ultimate choice between good and evil where “good” becomes a relative term at best. Where it’s easy for Noah to assist in giving Earth’s beasts a clean slate, allowing himself the same is impossible once he realizes the gravity of what he has agreed to do. Crowe injects such pain into the role that we cannot help but empathize with his plight and shudder to think of what we’d do in his shoes.

Watching him evolve from hopeful father and protector of life into the steel hardened right-hand of God pushing love and compassion deep within until he no longer remembers himself is but one of the piece’s crowning achievements. The effects work on The Watchers and the animals (although saying all are alternate versions of our own species is hard to believe when but a handful are shown close enough to tell) is impeccable and the acting true to the powerful immensity of what this tale brings. From Crowe’s internal struggle to Lerman’s isolation, Watson’s brave face of abject fear, Connelly’s emotional truth, Winstone’s imposing temerity, and finally Anthony Hopkins‘ sage eccentricity, Noah excels on the backs of its performances. We watch helplessly as Crowe’s disciple launches headfirst into a trial he may not be strong enough to survive.

The beauty of Aronofky’s vision, however, is to wonder whether that’s even the goal. Should we have survived? Should the flood have taken Noah too? Are we so self-involved to believe we were put here to dominate all others by confidently claiming to be of His image? The film begs us to answer this question or at the very least ask it. Religion is included—it’s origins stem from the Hebrew Bible after all—but so is science courtesy of a gorgeously rendered time-lapse from Big Bang through evolution showing how a “Day” can measure much longer than 24-hours. It’s a story about mankind holding its fate in its own hands, believers or not. He may be guiding us, testing us. But when it comes to whether we belong, He puts it to us. Do we?