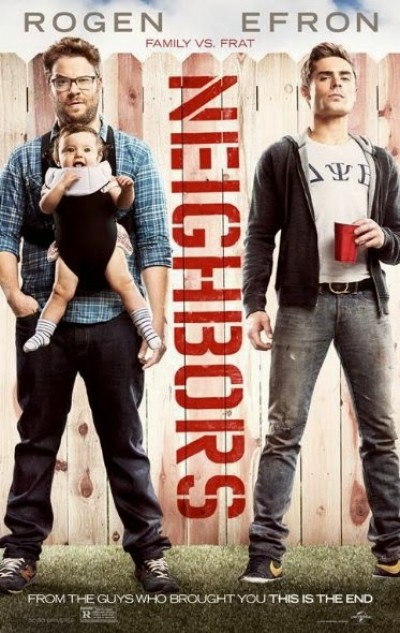 “We should go Mom tipping later”

After respectively writing and directing a short film that dealt with a manchild living in a storage unit who befriends one of the employees in hopes to stay,Brendan O’Brien and Andrew Jay Cohen have decided to go a bit less high concept with their feature screenwriting debut. But while the quirky setting may be gone, the theme of surviving the suburban boredom of adulthood is not. One could say Neighbors is an evolutionary reworking of American Storage‘s concepts as the duo polishes things for a mainstream audience and the longevity needed to satisfy ninety-minutes. Theirs and director Nicholas Stoller‘s friendship with the Apatow clan helps populate it with a cast worthy of its shenanigans and its lack of any true plot becomes an afterthought few will really mind as a result.

Like how that short pitted an on-the-surface introvert against a “cool” wild man before revealing they’re similarities, Neighbors gives us Seth Rogen‘s Mac Radner and Zac Efron‘s Teddy Sanders. The former is both a new dad with wife Kelly (Rose Byrne) and a first-time homebuyer on what the couple believed to be a sleepy street providing them the gradual transition from partiers to parents they needed without distraction. The latter is a fraternity president in his senior year at the local college whose one ambition is to throw a rager that will place he and his brothers on the same level as Delta Psi Beta legends. While all the stereotypes of their disparate positions remain intact, however, neither is simply that guy. Not that that will prevent the war living next to one another will soon create.

Mac—and Kelly for that matter—wants to retain his youth and believe he could still party until morning. Teddy would like to have options post-graduation but has discovered the frat may be his only shot at a legacy. So Cohen and O’Brien effectively throw them together into a situation that should eventually have them realizing they’re looking into a mirror when confronting each other. Thankfully—and this is the point—that realization doesn’t occur until after the damage of their escalating tit for tat is complete. The trailers make the whole endeavor out to be some massive Project X type wake of destruction, but it isn’t as simple as that. The climax is definitely hostile, dangerous, and insane, but the road does attempt a trajectory steeped in authenticity. And I believe this is the film’s biggest mistake.

Neighbors is at its best when it’s off-the-wall. This means some jokes will come off as skits strung together for laughs above story and that’s okay if the laughs are big. The only real plot involved becomes whether or not Mac and Kelly can get the fraternity shutdown with lazy, PR-cognizant Dean Carol Gladstone (Lisa Kudrow) telling them the boys have two strikes left. Is that enough to make us care about the characters beyond our desire to see how far they’ll go for victory? No, it’s flimsy at best with just enough relevance to get the ball rolling. No one involved earns our sympathy so it’s a mistake to try and force us to feel it. We don’t care if either side is guilty or regretful about their actions; we just want to watch the carnage unfold.

And in that respect Stoller has succeeded in getting some great performances out of his actors. Rogen is riffing on himself like always but it is a nice change of pace to see him in a role that is for all intents and purposes “the responsible” one. Heck, he’s even squarer than his wife as Byrne excels at being the conniving orchestrator of each covert mission of subterfuge. Mac still wants to be cool and hip, but he also wants sleep. That means baby Stella needs slumber as well and the noise is anything but conducive (even though the best joke of the whole film is that she hardly ever cries as a result of it). It’s no surprise, however, that trying to appeal sensibly to a twenty-year old proves harder than it looks.

The Radners have accomplices in friends and newly divorced couple Jimmy (Ike Barinholtz) and Paula (Carla Gallo)—he providing nice periphery humor and she generally wasted as a plot device to get him involved—while Teddy’s VP Pete (Dave Franco) and frat brother Scoonie (Christopher Mintz-Plasse) generally act like goofs rather than help. Everyone involved has his or her moment whether Byrne’s lack of tact and vindictiveness, Franco’s drunken laughter, or Craig Roberts‘ Assjuice doing what pledges do best. But at the end of the day the real highlights are Jerrod Carmichael‘s deadpan reactions as frat boy Garf and Hannibal Buress‘ aloof policeman Watkins. Those two deliver some of the best lines and allow their characters more meaningful exchanges than parody sight gags like Robert De Niro night or a gross-out breast-feeding fiasco.

The star, however, is Efron’s Teddy. He goes for broke whether putting on the charm or losing his cool to dark revenge and his delivery is on the mark to earn laughs with both over-the-top and subtler situations presenting themselves. He may actually be the most likeable too when the threat of future obscurity isn’t barreling down upon him. I’d love to watch the outtakes of he and Rogen going toe-to-toe verbally and physically (their final brawl is a hoot) because you can tell they dove in and ad-libbed until the right line was found. I only wish the filmmakers let the jokes exist on their own without needing to inject a want for compassion or understanding. While Neighbors is a riotous turf war, it also risks becoming a miscalculated slog when attempting three-dimensionality beyond that.