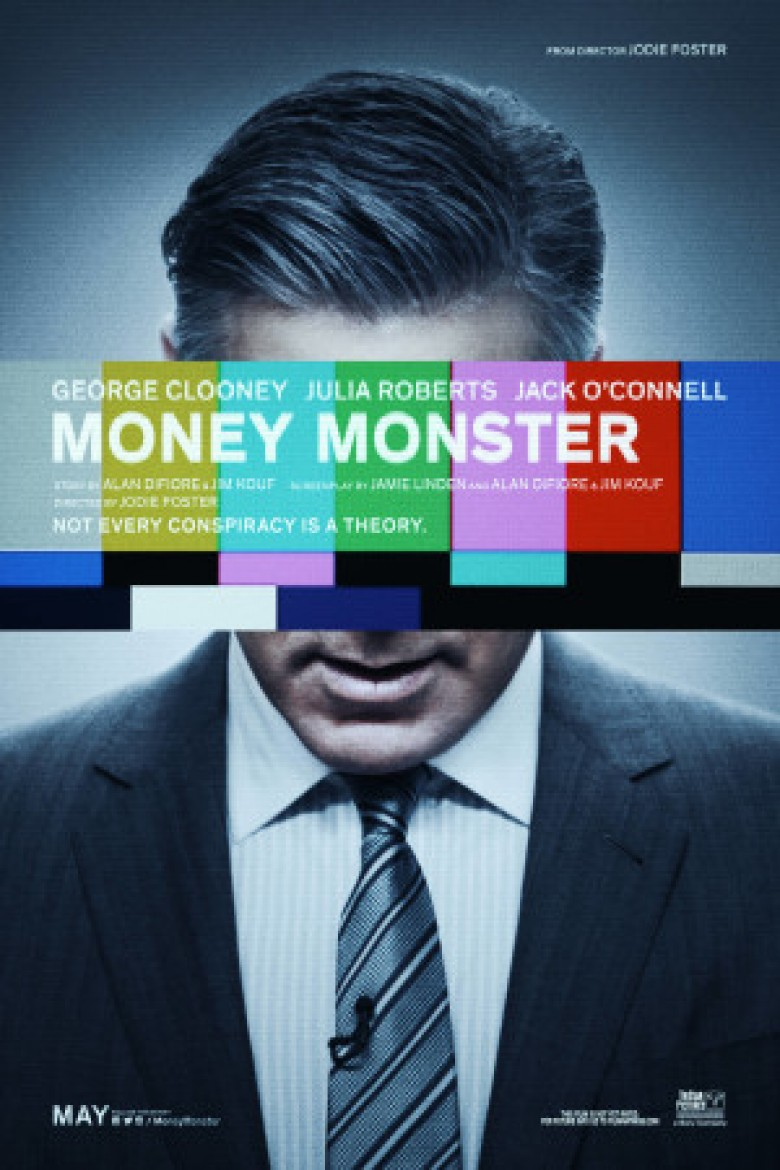 “It’s time to throw some punches”

The show must and will go on. This is the lesson Jodie Foster‘s latest thriller Money Monster provides above its suspense-fueled look into corporate greed and Wall Street’s seemingly Teflon-covered skin. I don’t know if it was written this way by Alan DiFiore, Jim Kouf, and Jamie Linden or if Foster put the more global arena spin of humanity’s craving for disaster on the other end of a television screen during the editing process, but you can’t help get slapped in the face by the disinterest of the public once the plot comes to an close. All those nameless strangers rapturously watching on bar TVs or via a comfy couch quickly lose the obvious spark in their eyes and ultimately return to their day. No one actually cares.

It’s all entertainment. When disgruntled everyman Kyle Budwell (Jack O’Connell) infiltrates the set of cartoonish Lee Gates’ (George Clooney) 24-hour news cycle stock investment circus, show director Patty Fenn (Julia Roberts) goes into defensive mode by telling everyone to leave who wasn’t providing an integral service towards keeping the cameras rolling. That’s her first move, but her next is to forget about the bomb Kyle straps to Lee’s chest. She runs a show and there’s nothing bigger than a full-on crisis of epically unpredictable proportions to masterfully capture live for the world. She tells lead cameraman Lenny (Lenny Venito) to push his unit closer to Kyle so as to alleviate shadows. She whispers in Lee’s ear to be a host. And America eats it up.

Why shouldn’t they? Not only does Kyle’s explosion of rage hit home for countless other viewers who’ve been swindled by “sure thing” stock tips or who suffered the catastrophic “bad luck” of losing pensions and retirement funds during the most recent economic crash, but they aren’t in that room. Some may even believe it’s all a ruse. Lee goes crazy on a regular basis—with rap songs, costumes, dancing, and other incongruous personality traits you don’t generally associate with a role Clooney performs—so why should this be different. Who cares if the media tells us it’s real and the police are on the scene? The TV news machine has blurred the line between fact, fiction, and hyperbole to the point where lines no longer exist.

Foster shows her hand too soon with a brief international glimpse at Seoul and Johannesburg—two locales that prove crucial to the plot unfolding rather than random cities showing the widespread reach of filmed domestic terrorism—but we can forgive the misstep because the plot is sort of a MacGuffin to the over-arching satire targeted at the wittingly ignorant public watching with baited breath. I won’t lie: I didn’t care what happened to Gates, Fenn, or IBS CEO Walt Camby (Dominic West), the missing-in-action executive whose company lost 800 million dollars of its investors’ money because of a glitch in the algorithm they used to diversify it. They’re all pawns in a game that goes back decades. It’s a game they didn’t create, but one they willingly played.

The people watching this tragedy unfold laugh as Gates tries to use his waning charisma as a lifejacket, unaware that most tune into his show for the theatrics and not the information. Only those ignorant to just how broken the system is look to him for help—men and women like Kyle that are desperate for a win to propel themselves off of the streets. But unlike most who roll to pass Go and pay two hundred dollars instead of acquire it, Kyle is done licking his wounds and calling it bad luck. It’s not bad luck; it’s business. He’s therefore the only character we care about because he is you and I. He’s trying to find answers those sitting pretty ignore without fail or question.

We watch. We listen. We gasp in awe when things make the psychopath with a dead man’s switch seem sane and giggle when he’s put in his place to sound even crazier. We care only so far as we care about the character of a soap opera—will he blow them up or will someone save the day? That’s all Kyle is to us: potential carnage. Once the answer arrives either way there’s no reason to remember his name. Nor is there reason to remember names or actions of those he harmed or harmed him. We as Americans don’t care about the long game because we live in the present for better or worse. Is that deal going to make me money? Sign me up.

Consequences are ignored because we bask in the glory of wealth. We idolize celebrities because they put themselves in the spotlight to aspire towards or chastise. People on TV are as manufactured as the money in our bank accounts. They are 1s and 0s running through electronic devices for us to tune in or tune out. We don’t know them and they don’t know us. They are props more people would call in to vote for their murder than volunteer money of their own to save them. So while we should vilify Camby and his company due to the logistically numbers not adding up like Kyle screams (and Gates and Fenn ignore until their mortality stares them in the face), we’re no better. We’re greedy and heartless too.

Thanks to Kyle Budwell, maybe we’ll wake up and acknowledge this truth. The aftermath of the film shows we probably won’t since using the experience to sell and earn more is easier than breaking it down to solve anything, but we can do better. O’Connell shows us the desperation of what doing better looks like and once again proves himself to be the best actor of his generation. We fear him because he is gone. He has something to live for and yet he’s ready to die, ready to sacrifice himself in order to expose fraud. Yet we call him crazy for doing so. He’s no hero. He’s just a man without any real estate to maneuver or strings to pull for answers. Sound familiar? Sound like you?

Those surrounding him do a good job too. Roberts excels at playing the pillar of strength acting more from routine than compassion so the show works first and the humans surviving follows. Clooney is at home playing the smug know-it-all ready to throw idiocy and deflection in the face of those giving it (but his ten minutes of being “afraid” is laughable). West is pure smarm; Caitriona Balfe an intriguing addition whose allegiances never prove cut and dry; and Emily Meade delivers a short burst of drama the trailer does well to disguise. There’s some effective humor in the script despite its dark circumstances and the whodunit is serviceable in its edge-of-your-seat thrills. The real success, however, is its turning the mirror our way. How do we react?