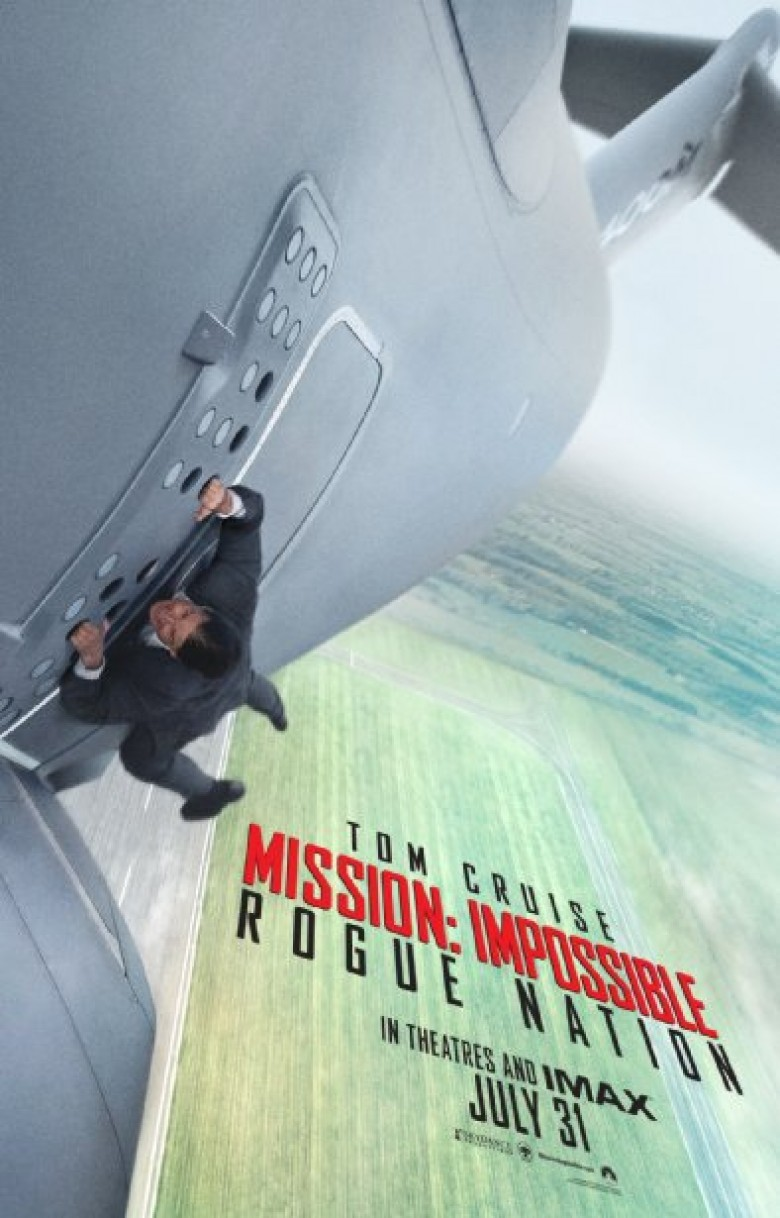 It’s amazing what a few years can do for a celebrity’s image. From couch-jumping in love to rumors of getting written out of the fourth Mission: Impossible installment despite building the franchise to being the bell of the Hollywood Ball scaling the Burj Khalifa and now hanging from an Airbus A400M Atlas in flight without a stunt double, Tom Cruise epitomizes box office royalty. Hell, there’s even rumblings he’s trying to distance himself from Scientology now—but I won’t hold my breathe with that one. Whatever he does in the paparazzi gaze serving as a personal life, he can rest assured we’ll keep buying tickets to the show as long as he keeps donning the Ethan Hunt persona. It helps that he has creative friends in high places to supply each new sandbox of espionage to do so.

Rogue Nation sees his Jack Reacher helmer Christopher McQuarrie behind lens and script (with co-story credit to Drew Pearce). While M:I III and Ghost Protocol revitalized the series afterM:I II‘s subpar performance, they remained more about action than espionage. To me Brian De Palma‘s original film will always be the best because it ensured its spy thriller aspect would prove paramount to blockbuster sensibilities. I thought the last two entries were great entertainment, but a bit of that cat and mouse intelligence was excised for the impossible stunts to shine. McQuarrie attempts and succeeds at merging these two directions for a huge thrill ride that feels like an intimate mono a mono affair. The fact Hunt and his crew are forced to work outside the law enhances things by literally placing the world’s safety on his shoulders.

How does this happen? Well, because the actions in Ghost Protocol catalyzed unsanctioned destruction needing to be answered for—the Kremlin did explode after all—CIA director Hunley (Alec Baldwin) seeks to prevent further chaos by dissolving the IMF before the Senate can appoint a new Secretary. William Brandt (Jeremy Renner) advocates for all the good they’ve done despite collateral damage, but it’s for naught. The CIA takes over and it’s join or die for Brandt and Benji Dunn (Simon Pegg). Hunley subsequently goes on the warpath to stop Hunt’s search for the elusive leader (Sean Harris) of a rogue organization consisting of supposedly lost/dead international agents coined the Syndicate that he doesn’t believe exists. So Hunt is forced into hiding as Brandt and Dunn deflect CIA resources and the Syndicate continues invisibly igniting civil war.

Harris supplies Hunt a bona fide nemesis that’s believably capable of staying one step ahead of him as he does Hunley. There’s an air about him as he pulls the strings and watches the action through cameras atop his cronies’ eyeballs while the woman he hopes will become his second-in-command (Rebecca Ferguson‘s disavowed MI-6 Agent Ilsa) strays. His stone-face and raspy voice paint him as a mysterious figure Ethan only has a sketch to work towards identifying him. So when a six-month trail of “accidents” left in his wake go by, Hunt must recruit Benji’s assistance. From here Brandt plucks Luther Stickell (Ving Rhames) out of retirement and the quartet go on the run with Hunley, MI-6 Director Atley (Simon McBurney), and the Syndicate in pursuit. And the verdict on Ilsa being friend or foe remains in flux.

There’s finally legitimate suspense that isn’t about whether they’ll set up the next implausible mission before their marks arrive. That stuff happens too—an extended scene with Ethan submerged in water for over three-minutes, fumbling to finish his role so Benji can play spy in the field for once gets your pulse pounding—but those are manufactured adrenaline rushes to propel plot. I’m talking about the over-arching sense of doubt about whom we can and can’t trust. I’m talking about bringing back the masks to keep us guessing instead of letting technological malfunctions render the cartoony sci-fi fun moot. There’s always more than meets the eye where Ilsa, the Syndicate, and each government is concerned. Also, while Hunt knows he’s perpetually one second from being labeled the fall guy, his maneuvers have us wondering if he deserves it.

Rogue Nation is at that point of the franchise’s evolution where we question whether Ethan Hunt has officially gone too far. Brandt is ever vigilant towards this end, but there’s also pause with Benji and Luther too. It’s become personal thanks to Harris specifically targeting him as opposed to them merely crossing paths. He’s in the business of collecting spies and putting Hunt in his pocket would be a real coup. But this like everything else goes deeper than the surface as the Syndicate orchestrates its chess match of contingency plans and infinite tests of loyalty that even render failure to work in its favor. Hunt’s willingly given the bad guy volatile information before—see Ghost Protocol‘s Cobalt—but this is different. What he thinks Harris wants might only be a smokescreen to his ultimate goal.

Add a rousing motorcycle chase, the aforementioned Airbus and underwater heists, and an invigoratingly choreographed assassination plot during a live opera with its music providing the only sound and the end result delivers thrills that conjure visceral excitement along with emotional and intellectual investment. There’s even a wealth of comedy thanks to Pegg’s Benji being promoted to second lead—something I feel might have been born from Drew Pearce’s involvement. While this jokey atmosphere did seem excessive in the midst of it all, hindsight has me appreciating it as the reason many sequences have stayed fresh in my mind. It deflates the grand dramatic moments by lightening up close shaves with death yet never marginalizing their weight. Mission: Impossible continues to prove summer blockbusters can be entertaining and challenging without eventually needing to sacrifice one for the other.