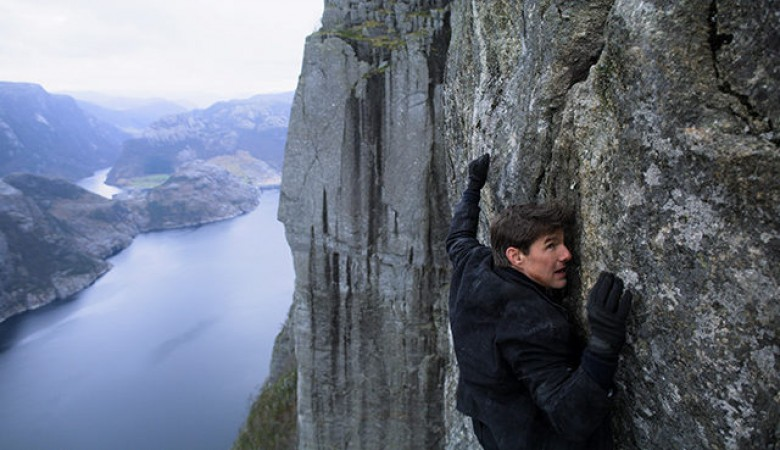 The former leader of a group of rogue agents seeking to unite people against unchecked government oversight—a cause worthy of pause if not for the terrorist acts of genocide utilized to achieve this goal—speaks to the man who caught him with confidence about how he’s worked to ensure the price of that “hero’s” good intentions will soon be paid in full. We wonder how this is possible considering Solomon Lane (Sean Harris) was captured by Ethan Hunt (Tom Cruise) two in-film years ago, spending every second since in custody on an international tour of nations hungry for their pound of flesh. But we hear those words and look around. We see everyone Hunt has loved in close proximity and a nuclear bomb that cannot be disengaged.

Writer/director Christopher McQuarrie has therefore done with Mission: Impossible – Fallout what the team behind James Bond’s Spectre couldn’t. Rather than scramble to retrofit the great mysteries and missions of previous installments to solidify a master villain conveniently pulling all the strings, McQuarrie builds upon them. He looks back at what has defined Hunt’s actions in the past five films, understanding the answer to be humanity. In a profession where death is virtually assured and sacrifices literal prerequisites, this man has done everything in his power to both save the world at-large and protect those closest to him. It began when his parents were leveraged in the first and cemented in the third with the kidnapping of his fiancé. Lane’s vengeance isn’t therefore apocalypse. It’s simply dismantling Hunt’s soul.

So in a franchise that’s defined itself by always going bigger with its sprawling casts, insane stunts, and exotic locales, McQuarrie somehow finds a way to retreat within the spectacle. He can afford to do this because he set-up the fact that the toughest enemy we face is ourselves. It’s no coincidence that Rogue Nation and now Fallout prove far and away the best entries in this series. They’ve earned that status by focusing upon villains who aren’t much different than Ethan himself. Lane and his “Syndicate” are all former operatives turned by a cynicism unable to let them see their work as more than government-motivated power plays without true meaning beyond nationalistic superiority. They see their lives as empty, their purpose stolen. They see a world enslaved.

Hunt has yet to lose his purpose. While his actions are for the good of many, his real motivation is saving those he loves. Staving off massive annihilation is a means to an end because he cares about the people trapped in the crosshairs. This is why CIA Director Sloan (Angela Bassett) calls him a scalpel rather than hammer (like her best assassin, Henry Cavill‘s August Walker). He still acknowledges the difference between innocents and monsters enough to try his hardest to minimize collateral damage even if it makes his cover impossible to sustain. Some would say it’s a weakness—the only reason the new leader of Lane’s former network (now coined the “Apostles”) has plutonium is because Hunt wouldn’t let his friend die. Others call it strength.

This film looks to discover which is true. Is Hunt’s innate desire to hold onto attachments a liability towards completing his missions or a motivation for the tenacity necessary to never stop pushing forward until achieving success? McQuarrie isn’t going to make discovering that answer easy as everything has come back to force Hunt into making decisions he does not want to make. Should he save a man he knows is going to cause trouble in the future? Should he free the worst foe he’s ever defeated in order to get closer to the one currently threatening to destroy everything? Should he trust a former ally whose mission is in direct opposition to his own? What makes Ethan Hunt great is that he weighs these options at all.

But those questions are also being manipulated. They’re being thrust upon him in order to see whether he will break. Because think about it: the airtight plans on behalf of the unknown John Lark are poised to defeat Hunt’s body or mind. Either he succumbs to the nuclear blast or he survives to find everyone else dead. Either he dies trying to uphold his code or he confronts the pain it has wrought. So maybe Hunt dies or maybe he becomes the next Solomon Lane. To the latter it’s a victory regardless. And that’s why Ethan must rely on those he’s willing to die for despite wishing they could be anywhere else under a shroud of safety. His feelings are born from his trust in them.

This means that Luther Stickell (Ving Rhames) and Benji Dunn (Simon Pegg) have never been more crucial to success both in their duties on the job and their faith in and from their fearless leader. Ilsa Faust (Rebecca Ferguson) is going to need to be leaned upon even if she’s also positioned to throw a wrench in their plans because Hunt’s team showed her there’s always more than just the mission. Even IMF Director Hunley (Alec Baldwin) gets involved beyond his desk duties back in America. All hands are literally on deck as pieces are moved out of Hunt’s sightlines by nefarious figures he knows (the CIA’s Sloan and Walker, Vanessa Kirby‘s black market broker “White Widow”) and those he doesn’t (the “Apostles”). And the clock is ticking.

The result is a pulse-pounding affair that’s easily the franchise’s tightest. You don’t often say that about a two-and-a-half hour runtime, but it’s true because I can’t think of one second to trim. It also excels in its fallibility—Mission: Impossible as a cinematic entity always has. The infamous bathroom scene pitting Hunt and Walker against Liang Yang‘s formidable opponent is so unforgettable because the former duo gets trounced more often than not. We can feel each punch and kick, wholly cognizant of the labored breathing and chance of failure despite our brains knowing it’s way too early in the film to not have them prevail. The same goes for a glorious automotive chase with imperfect results. Thinking on the fly is key because no plan is flawless.

And because we’re really delving into what makes Hunt operate differently than rogue agents who’ve been burned less times than he, McQuarrie is able to share more details about his life and what happened with Julia (Michelle Monaghan) between M:I III and Ghost Protocol. We therefore get to see him at his most vulnerable emotionally as well as physically (no matter how in-shape Cruise remains, age can’t be ignored as a factor). I think it’s that physicality that resonates most because it highlights his perseverance. Where skill got him out of situations in the past, he needs mettle and desperation here. To possess that sense of humanity alongside its slickness in style is why this series has endured and hopefully will continue to do so in the future.