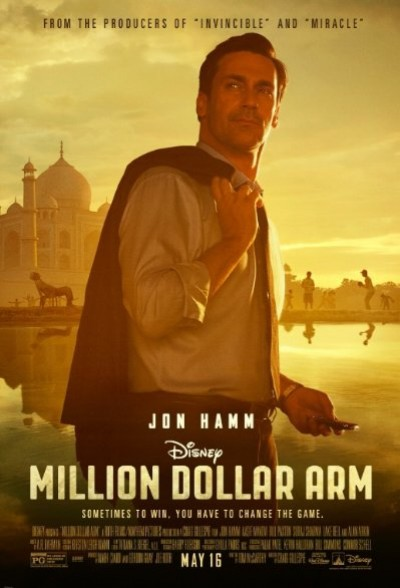 “That better have been filtered water”

The seventh and final season of “Mad Men” has begun yet star Jon Hamm is only now getting his first leading man role in a feature film. So why does what should be an auspicious event considering his obvious talent seem less than noteworthy? As good at comedy as drama, no one can deny he owns chauvinistic smarm on TV or has the chops to play a business-first sports agent who exclusively dates models while scheming to earn his next buck. The problem lies in the fact that this cinematic break comes under the umbrella of a Disney true sports story. You know the ones: Miracle,Invincible, The Rookie, Remember the Titans. The kind of stories that tug at heartstrings until the self-centered puppet master learns humanity and the improbable athletes earn glory.

I had high hopes for this one due to Thomas McCarthy coming on as screenwriter. A master at the underdog with his three directorial efforts, I hoped he’d skew this one more towards the dramatic than melodramatic. Sadly, however, even McCarthy seems handcuffed by the material if only because he must compress a year’s worth of set-up, training, ups, downs, and two disparate cultures into a two-hour film. That means director Craig Gillespie has ample opportunity for montage sequences set to A.R. Rahman‘s pop star-infused soundtrack as well as the unfortunate reality of huge epiphanies occurring as a result of trite pep talks. I’m not going to mince words—Hamm’s JB is the entertainment industry jerk stereotypes are made from. So is one brief heart-to-heart with the “girl next door” truly going to reshape his life?

Yes, it’s a true story wherein the real JB knows this total package of a woman he never thought twice about beforehand—despite her living as a tenant on his property—knocked sense into him. And I’m sure Brenda (Lake Bell) did, but it’s highly doubtful the change occurred overnight. Here’s a guy that spends his final opportunity to remain a business owner by flying to India for three months with a retired scout (Alan Arkin playing Alan Arkin) in order to bring two poor, third world country kids (Suraj Sharma‘s Rinku and Madhur Mittal‘s Dinesh) to the US on his dime and he pretty much ignores them. This is a gross simplification of what happens but that’s only because the film grossly simplifies the story to set up this unlikely hero’s spiritual transformation.

To do so, however, means to also focus way too much of the story on him and not the real subjects: two javelin throwing, cricket-hating kids who less than ten months after being plucked from obscurity are pitching baseballs in front of MLB scouts. I don’t even care that the culture clash jokes made in India and the US play wholly on cliché (the incessant tuk-tuk honking of the former and the excessive property means of one man without an extended family to care for of the latter), they still provide the best moments because they earn our attention. Whether JB thaws his cutthroat mentality to treat the boys like human beings rather than commodities is less important than them working with coach Tom House (Bill Paxton) and preparing for a dream so outrageous they never dreamed it.

I’ll give the filmmakers credit as far as how they handled the romance between Hamm and Bell because it feels natural even if her sage wisdom constantly getting through to him when everyone else saying the same thing doesn’t makes your eyes roll. In my opinion Bell is by far the best part of the film—an authentic, headstrong woman that refuses to take crap from anyone no matter how much she likes him. The blatant juxtaposition against JB’s current model squeeze Lisette (Bar Paly) aside, her growth from neighbor to friend to irreplaceable partner in the whole endeavor is honest. She provides Dinesh, Rinku, and even the overly excitable Amit (Pitobash providing the fish-out-of-water humor as the boys’ interrupter/prospective coach) a steady sense of security, love, and protection they’re without being so far from home.

Million Dollar Arm therefore proves a solid depiction of what happened—a sequence of events videotaped by Amit to pitch to Hollywood despite probably being better served molded into a documentary instead. Hamm’s effective as its star, playing the role as required through his character’s many emotional transitions. Does JB often feel like a pawn moved around the board so Rinku and Dinesh can drown in a pool of anxiety and self-doubt? Yes. That’s unfortunately the name of the game when it comes to against-all-odds stories, though, so you learn to accept it. For their part both Sharma and Mittal captivate our attention even when alongside actors of Arkin and Paxton’s caliber. We pull for their success, enjoy their stranger-in-a-strange-land pratfalls, and appreciate their impact on JB’s perception despite his redemption always feeling unrealistically rushed.