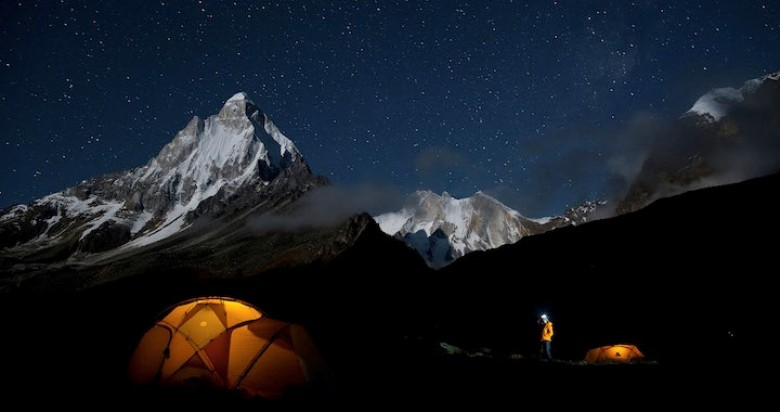 “The best alpinists are the ones with the worst memory”

You have to be a little bit crazy to mountain climb. If I didn’t know from experience,Jimmy Chin and Elizabeth Chai Vasarhelyi‘s documentary Meru definitely explains why. I draw the line at hiking, so while I’ve summited Mt. Algonquin and Mt. Adams, I’ll never have the confidence or desire to go for Denali or Everest where hand-over-hand scaling, ice picks, or carabiners are involved. I leave that to my friends and enjoy their photos from afar. So to see Conrad Anker‘s twenty-year mission—one he’d already failed previously before recruiting Chin and Renan Ozturk to join him for a return—is to see passion and fearlessness in the face of accomplishing something no one else has. To watch his drive remain unfazed after the tragedies befalling them along the way justifies my decision to stay home.

Documenting the climb is film worthy because it has the potential of immortalizing history as well as providing gorgeous visuals never before seen. Having climbers like Chin and Ozturk doubling as cinematographers—professionally so as we’ll learn from their partnership in the years between Meru attempts—only renders it the perfect situation to showcase the danger and splendor this adventure holds. It’s Vasarhelyi (Chin’s wife) who remains home to interview family members (Anker’s wife Jennifer Lowe-Ankerand Ozturk’s girlfriend Amee Hinkley) and friends (author Jon Krakauer) in order for us to see both sides of the tale. Because doing things like scaling a 21,850 ft. mountain with risks of hypothermia, frostbite, and death isn’t only about those climbing. The support and love back home, sitting and worrying about what’s happening a world away, is just as relevant.

No one could have anticipated the struggles endured, though. As Anker says when talking about his mentor’s death in 1992, he knows these things happen but doesn’t imagine it will be his friend. He doesn’t believe it could be the best climber in the world either. But this is the reality of confronting nature as they do. The risks are immense and this trio slowly pulling themselves up Meru’s Shark Fin explains why. They photograph their trench toe and frostbite upon returning. Cameras catch equipment breaking while in use and sections of the granite rock cleaving off when the lead is hammered too far into its face. Snow and ice being scrapped away at top comes pouring down upon the group members underneath and temperatures dip twenty degrees below zero once the sun disappears around the mountain’s edge.

And this is just the main event. To also learn of their respective near-death experiences on different peaks with much better conditions makes you shake your head at them for ever going back up a mountain. We of course know why: this is their livelihood and a huge part of who they are as people. Survivor’s guilt or not, the damage and depression brought on by leaving it behind would grow as harsh or harsher than continuing on after tragedy. If anything the fight pushes and reinvigorates their drive to accomplish every goal. It’s not coincidental that Jimmy promised his mother not to die before her. Nor is it minor for Conrad to let his love for wife and kids keep him strong. This love keeps them honest and sometimes saves their lives.

Rated R mostly for language, Chim and Vasarhelyi do well at keeping the truly ghoulish footage off the table. There’s some gore courtesy of a devastating injury sustained by Ozturk, but it comes in the aftermath while strapped to a stretcher and in a hospital bed with stitches. The blood we’re shown is on those who survive: the dead honored with footage of smiling faces and memories of the joy had doing what they loved. Even on Meru the truly dangerous scenes are excised either due to their sense of dread or because the cameras weren’t turned on. At one point Jimmy tells Conrad that if he was going to fall, he did it at the perfect time. We can infer he did slip a few feet and hypothesize it as more nerve-wracking than the conversation shares.

Beyond the magnificent footage—there are some helicopter shots with high resolution stars burning in the sky above and others sped in time lapse to depict Jimmy, Conrad, and Renan’s daily progress—and the unbelievable drama of the years between their two attempts, I also enjoyed the technical nature of what’s captured and spoken about onscreen. The filmmakers don’t shy from retaining moments hammering in nails, clipping carabiners, or eating frozen couscous. This is all part of the climb and crucial to comprehending the physical and mental fortitude necessary for victory. We can hear the fear in their voices and the frustration when failure is upon them. The sense of conflict between veterans and newcomer after they keep moving up despite a lengthy storm depleting their rations remains even in interviews months later back home.

Nothing is staged and nothing glossed over. A small sense of their personal lives is added in too whether the intriguing way Conrad and Jennifer came together, Jimmy’s bachelor pad lifestyle finding room to care for his sister, and Renan deciding to push his body beyond its limits without consulting his girlfriend first. Climbing is who they are and the potential of conquering Meru a major run at immortality. The trust they have in one another is what gives them the chance and their love for those back home supplies the rationality in the face of recklessness to call it quits even if only one day from prevailing. This last fact may be more inspiring than reaching the summit because it proves there are more important things than the mountain. Live to fight another day.