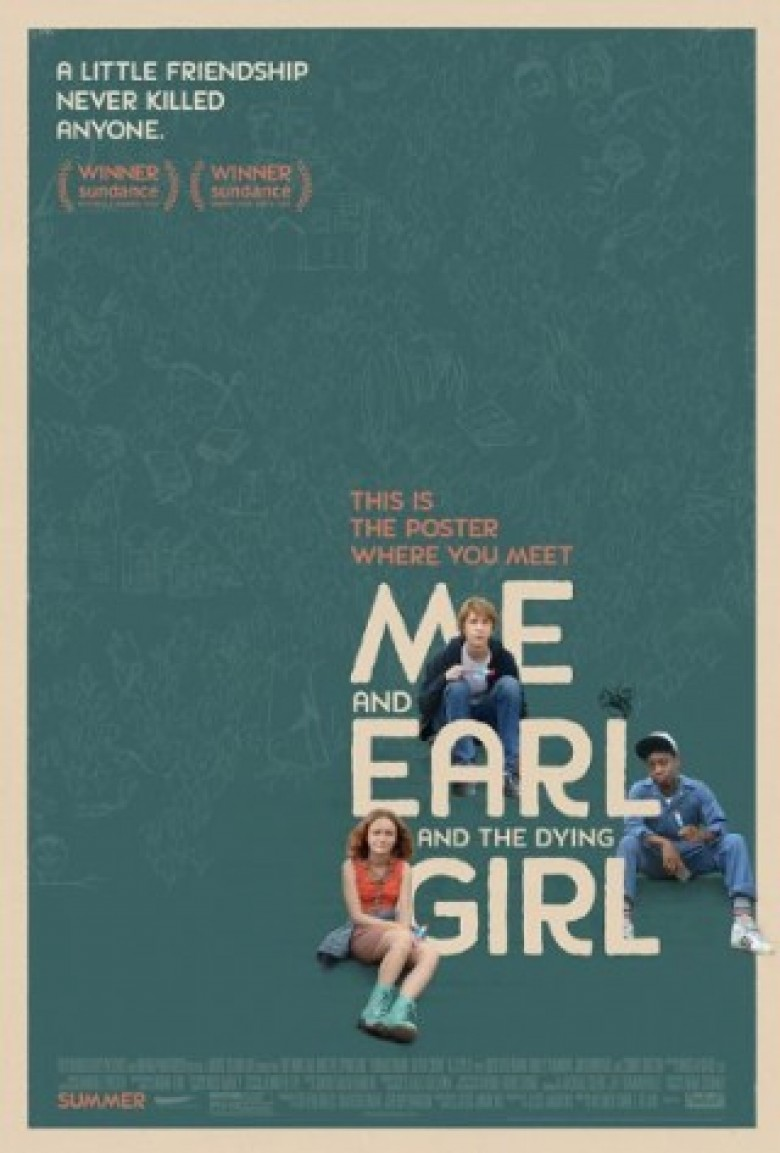 Alfonso Gomez-Rejon‘s Me and Earl and the Dying Girl can be described asThe Fault in Our Stars meets Be Kind Rewind. While the correlation to the latter is nearly identical with both comically parodying cinematic greats (albeit of differing oeuvres), the former hits as a contrast despite similar subject matter. WhereasStars‘ has two leads afflicted by cancer in order to express how they cope with their mortality, the titular “dying girl” here is a tool used to wake its healthy lead up. Above pity, strength, or even death, Jesse Andrews‘ script (adapted from his novel) focuses on life instead. He’s highlighting the fragility of our existence and the power we possess to push through insecurities to own our identity, desires, and conscious decisions to sacrifice personal convenience for another to achieve them.

On first glance it’s all about surfaces with a hip sense of humor delivered by eccentric characters too witty and manufactured to be real. But somehow they are. Every instance of indie darling contrivance should have made me cringe, but I found myself laughing instead—laughing and nodding my head at the authentic performances rendering every line of dialogue true. This isn’t an easy accomplishment and it’s a credit to all involved that they’ve achieved such a feat. Because we should roll our eyes each time Nick Offerman‘s work-at-home dad slowly and straight-faced speaks random insights with exotic food in his hands or when Molly Shannon awkwardly hits on her daughter’s friend with a glass of wine. Yet these details—while funny in their seemingly arbitrary, odd way—also infer so much onto their emotional states.

Everyone’s masking how he/she feels except for the girl at the center. Rachel (Olivia Cooke) is the cause of their troubles and the way they act as a result of wanting to be selfless only proves how selfish they are. I’m not saying that as a bad thing or to explain that these people are horrible human beings. It’s just a reality of not knowing what to do when faced with the prospect of someone else’s potential impending death. Rachel is the one going through the actual physical and psychological pain while weighing both against the optimistic hope of exiting the fight victoriously. She’s the one who must endure the looks of pity in public and feign appreciation for empty cards and flowers that do nothing to ease the side effects of her chemotherapy.

So everyone walks on eggshells—yes, even Earl (RJ Cyler), whether his blunt stoicism and beyond-his-years maturity hide it or not. The humor merely softens the emotional blow of Shannon’s Denise doing all she can to not completely fall apart in front of her sick, only child. It distracts us from the pained look on Offerman’s and wife Connie Britton‘s faces when looking at their son Greg (Thomas Mann) and the chaotic roller coaster of a senior year he’s experiencing. But most of all it allows Greg, the “Me” in the title, to deflect his myriad fears with nervous filibustering so he never has to confront them. It wasn’t his idea to befriend Rachel in her time of need, but he found in her a person with which he could be his endearingly off-putting self.

Greg ultimately proves the best thing for her—a distracted distraction so caught up in his own problems that he isn’t constantly projecting hers back upon her like the rest. Rachel becomes his escape and savior, pushing him to do things without the stigma associated from the blind love of parents. And he does the same for her, providing smiles where only silence and sadness remains. They’re both avoidant and delusional as a result, a fact that makes Earl key to their dynamic as the voice of reason and rock they can look to for honesty. Things get shaky when the stakes rise and the outlook’s grim appearance forces Greg back into his prison of self-doubt, but there’s something about feeling the chaos destroy your carefully manicured existence to realize it’s finally time to grow up.

The film’s an intriguing one in this respect because it’s truly about Greg, not the “dying girl” as expectations assume. It took me half the film to get over this realization because we’ve been trained to “know” where the dramatic impetus comes from. I held Greg in contempt for being such a jerk—for leveraging the peripheral relationships he cultivated with the disparate cliques at school into mean comedy when anxious; for not coddling Rachel because he has no filter for insensitivity rather than for her sake; and for making everything about himself to the point where he can’t call Earl a “friend” in case it means dealing with the depression of a reality where he’s not. But all that’s intentional. He isn’t overshadowing Rachel’s plight, he’s learning to deal with his role within it.

This is why twee details such as Greg and Earl filming punny homages to classic cinema the former’s father exposed them too work. It’s why Jon Bernthal‘s tattooed, cool history teacher Mr. McCarthy can be an important Haime Escalante-type while living in the background and why Masam Holden‘s Ill Phil and Matt Bennett‘s Scott Mayhew can be such blatant clichés without ever becoming obnoxious. They provide Greg the various heightened social stereotypes surrounding him to delicately traverse and turn invisible against—a state torn down by befriending Rachel and letting the world can see him once again. It’s his worst nightmare and it stems from putting her happiness ahead of his own, fighting for her at the detriment of his future. So when she eventually betrays that covenant in Greg’s mind, his absolute dismantlement proves inevitable.

It helps that the central trio portray their emotional spectrum so authentically. The more you think about it the more you realize their awkwardness is the joke. Mann’s so good at rambling through Greg’s stream of consciousness inanity that we chuckle at his mannerisms and the visible fear in his eyes refusing to let him stop. Cooke deftly handles Rachel’s constant fluctuations from strong to weak, forceful and dejected and Cyler’s a standout infusing Earl’s unfazed demeanor into situations where everyone else is wearing their emotions on their sleeves. And these up-and-comers often do it during genuine long-takes with the camera circling rooms so the performances and timing can speak for themselves—sometimes without words. Me and Earl and the Dying Girl is unquestionably fun, but its ability to use that fun to devastate us sets it apart.