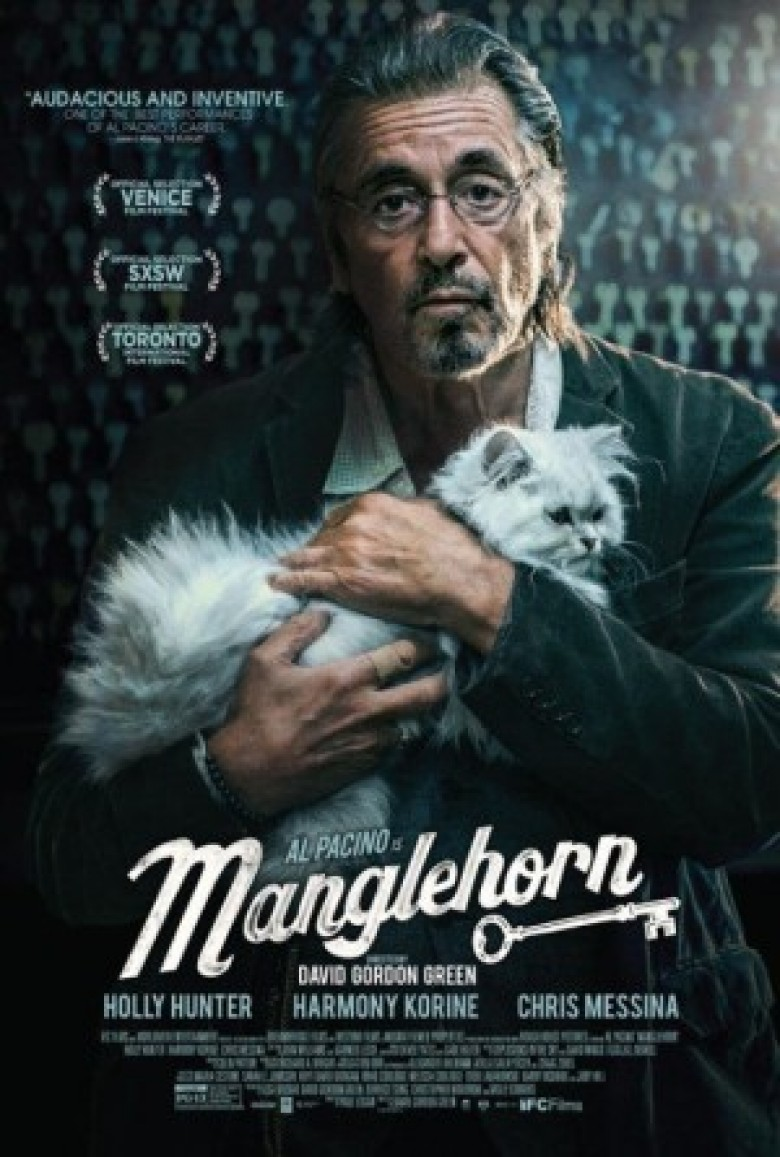 Upon being asked whether he knows he’s a son-of-a-bitch or not, A.J. Manglehorn (Al Pacino) replies matter-of-factly with, “Yes. Maybe a little. Aren’t we all?” It’s a seemingly innocuous line within an intriguing film positing how each one of us can always see something of ourselves in characters onscreen. We can relate to the son-of-a-bitches and the kindhearted optimists, recalling moments in our lives mirroring what’s seen—probably not closely, but enough to send us back. The people surrounding this solitary curmudgeon of a man who mutters to himself and pines over a love he let slip away often do the same. They endure Manglehorn’s prickly awkwardness, verbally and physically, always sharing a magical anecdote in the end that adds to his mystique as someone bigger than appearances would have you believe.

Paul Logan‘s script for Manglehorn—from an idea originated by childhood friend and the film’s director David Gordon Green upon meeting Pacino on a commercial shoot years previously—only subtly hints at the titular locksmith’s life through these implausible stories recounted as though fantasy. They infer upon our nostalgia for wanting to see the good in people despite surfaces alluding to the fact good has nothing to do with them. Manglehorn would be the first to admit regret and mistakes so don’t think he’s unfairly maligned by expressions shared in response to his trademarked tangents expertly phrased to irrevocably anger the person across from him. He says how he never loved his wife, refuses to hide the disappointment held for his successful workaholic son Jacob (Chris Messina), and keeps everyone at arm’s length except pet cat Franny.

He’s a man resigned to being exactly what everyone tells him he is: a difficult, angry person best left alone. That doesn’t stop him from continuing on for kitty and his business, though, roaming Austin streets to fulfill each call made from fellow citizens locked out of cars, safes, and houses. It doesn’t stop him from joking straight-faced with his granddaughter either, despite wanting to simply set sail in his boat and never return. There’s a softer side to him, one of compassion and humanity that he almost feels unworthy of letting others see. The trouble with being him is that his ability to draw people closer only makes his inevitable act to ruin the relationship hurt more. Not for him—he often seems uninterested in guilt—but for the ones who chose to love him.

The movie’s a somber one following Manglehorn from his job to his apartment to the buffet he regularly attends to his ritualistic Friday visit to the bank. There are many sequences of slomotion journeys sometimes translucently overlapped by moments coming later while Explosions in the Sky or Pacino orating his latest letter to Clara (the one he lost) play above. He’s a man living as though he could care less about the life blossoming around him. Catching break-dancers moving in the distance or calmly walking past a giant pile up of cars and screaming drivers elicit an identical inquisitive look completely devoid of surprise. It’s merely life and happenings he has no control over or the emotional depth to see beauty rather than mundane. If only there was a key to unlocking his heart.

While slow-moving and sometimes disjointed by Green and Logan’s decision to cut away from their central vantage point so other characters can share those cryptic memories of acts that inexplicably made them cherish Manglehorn, there’s an odd magnetism to what’s onscreen and the potential for revelations to come. If he were simply a depressed old man incapable of engaging with society without also pushing it away, we’d excise ourselves and shrug at one more example of an often-used trope. Even if he were some magical being who healed animals and erased the aftermaths of his wrath like some believe, we’d still be unimpressed by flights of fancy masking an otherwise sparse story. Together, however, they create a mysterious reality for us to at least imagine answers if none are provided.

We parse together the disparate people entering his periphery whether the local pimp he used to coach in Little League that adores him (Harmony Korine‘s Gary) or the bank teller who wishes he’d ask her out (Holly Hunter‘s Dawn) and see where they fit against permanent fixtures like Jacob and granddaughter Kylie (Skylar Gasper). Who brings out his temper and who earns unlikely calm? Who’s seen as a threat to the supposed happiness he won’t let go of despite options for real joy existing in the here and now? Who remembers when he rekindled life from death despite our seeing so many examples of bad luck and ominous foreboding ruling his days? Manglehorn focuses on a singular truth so wholly that he’s blind to everything else. And he’s been stuck on this current truth for decades.

Similar to Green’s films previous to the comedic sojourn enjoyed until Joe returned to those roots, he is intent on showing a true-to-life reality in extras, locales, and attitudes put onscreen. His characters are often eccentric to the point of being obtuse and their environments are generally harsh to pose existential crises upon them. Manglehorn is no different with tiny moments of conflict opposite the buffet cashier charging him increased prices or a Spanish mother he can’t resist chastising for having a dirty car while unlocking her son from it. In one instance Green even shows a veterinary procedure to cut out a key from Franny’s intestines. By themselves they are mundane moments shoehorned in to provide color, but together they become important details towards understanding Manglehorn’s delicate psyche and impenetrable walls.

Will he break through these psychological hang-ups? Or will he fracture more relationships and move farther into the isolation he thinks he deserves? You’ll discover the answer by its end—or at least the answer to this chapter since there’s a pretty real possibility the next one devolves into the exact same pattern. As a somewhat warped fairy tale, it actually appears the anger that throws loved ones to the curb helps clear the path for them to find the joy they never would with him. So we almost hope he remains locked inside the idyllic “what if” of a life with Clara while everyone moves away. But that’s life. By touching so many people along the way, we end up too busy lamenting the failed connections to realize those we’ve inspired in between.

Becker Farms Apple Harvest and Fall Fun on the Farm