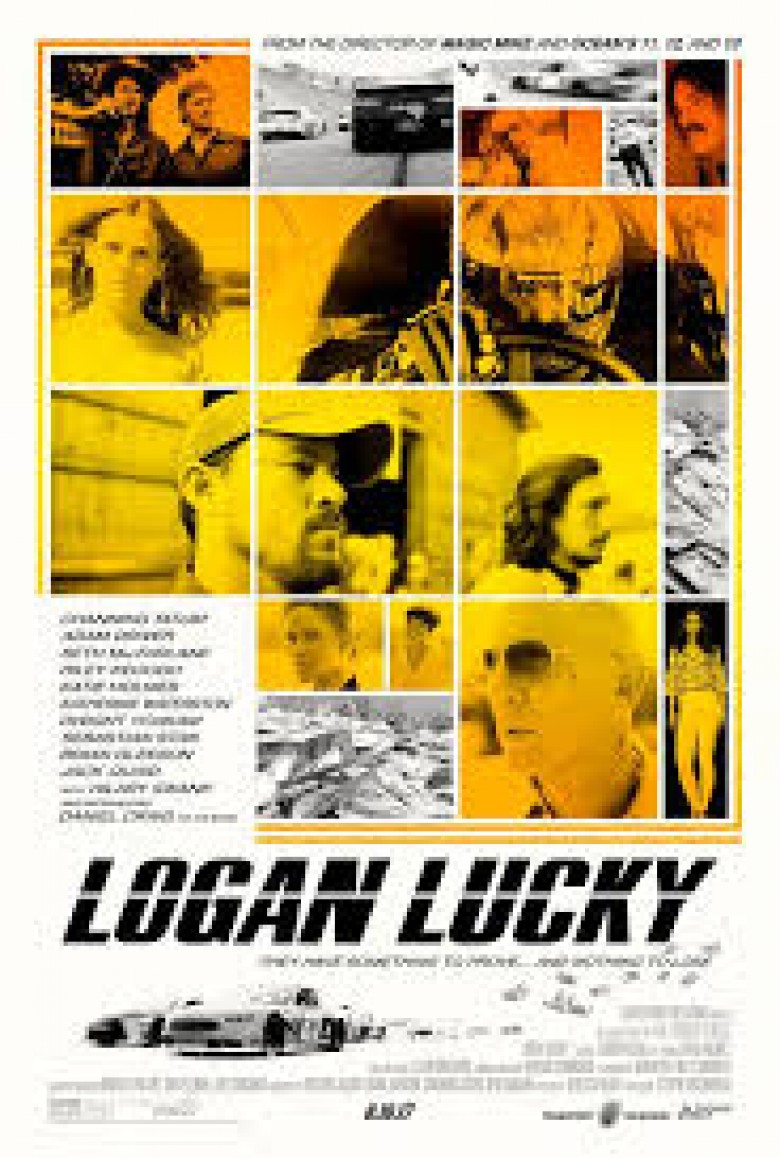 “Did you just say cauliflower to me?”

The story is as follows: Steven Soderbergh—while on hiatus from feature films (previously known as retirement)—received a script from mutual friend and screenwriter Rebecca Blunt (who might not be a real person). He fell in love with its stripped down Ocean’s 11 feel devoid of the posh financial backing robbing casinos needs and knew he’d regret handing it off to a recommended contemporary instead of helming it himself. Soderbergh therefore sat on this hillbilly heist gem until his show (“The Knick”) was cancelled and his ability to test a new studio distribution system (which he admits isn’t new at all) arrived. So, whether some wonky stars aligned or it was expertly orchestrated, Logan Lucky‘s origins prove as backwoods complex as the film itself.

And honestly this couldn’t be better for fans of the auteur because it shows he still has the goods for popcorn fun while predicting another dramatic entry to his oeuvre (experimental in nature or not) may be lying in wait. So it's a win-win situation for everyone involved, the least of which is Bleecker Street Media for having the wherewithal to hitch their wagon to Soderbergh’s Fingerprint Releasing’s train. After all, the director never experienced a dearth of financial success when going lowbrow for comedic genre thrills, and this shouldn’t either. The country’s climate has changed since Ocean’s 13 (2007), from reveling in “coastal elite” excess a la glitz and glamour, to seeking tales of small fries gaming a corrupt swamp in need of draining.

I don’t think it’s a coincidence that Soderbergh made a film ostensibly in the mold of past endeavors but with a much greater rural America slant. Just look at its heroes: Jimmy Logan (Channing Tatum) who is a down-on-his-luck former football star trying to do right by his cute daughter who already knows the difference between a Philips- and flat-head screwdriver, and Clyde Logan (Adam Driver), an Iraq war veteran tending bar despite having lost a hand and forearm in an IED strike. These are the types of hard souled, blue-collar citizens that Trump targeted to win the presidency (did I mention that they reside in a mining town?). So why wouldn’t Soderbergh follow suit with the dual goal of making money and subtly mocking them to their faces with humor?

Intentional or not, the formula succeeds because the final product is an entertaining ride as similar to his previous trilogy in concept as it is dissimilar in environment. Jimmy is as smooth and conniving as Danny Ocean with the added bonus of also constantly being under-estimated. It’s not simply the people who he’s attempting to rob that look at him with skepticism, either. His own brother does, too. Clyde has been on the straight and narrow ever since a botched crime landed him in juvenile detention years earlier, but he likes that his brother shows initiative and vision enough to listen to his plan anyway. And since Jimmy has been privy to so much of the monetary inner-workings at Charlotte Motor Speedway (as a hired hand fixing sinkholes), it might actually work.

So they enlist their sister Mellie (Riley Keough) for her car knowledge and ability to get the wardrobe needed to blend in. They hatch a plan to break an old accomplice out of prison (Daniel Craig as Joe Bang) because he’s the only person they know who can blow the vault housing the concessionaire money delivered by the raceway’s pneumatic tube system. Joe won’t do it without his brothers (Brian Gleeson‘s Sam and Jack Quaid‘s Fish—think Virgil and Turk Malloy, but stupider) so they’re in, too. The timetable is tight with everything needing to go off perfectly since the prison can’t know that Joe was gone. Pair that pressure with Jimmy's desire to attend his daughter Sadie's (Farrah Mackenzie) talent show, and there’s no rest for the wicked.

The big difference between Logan Lucky and Ocean’s lies is the execution of the heist. The latter series always involved practice and planning, whereas the former keeps us in as much darkness as to the details as the Bang clan. There also isn’t an all-seeing eye of authority watching over them since the FBI (Hilary Swank and Macon Blair) doesn’t enter the equation until the deed is done. So we’re enjoying antics more than anything else—funny little scenarios that get us to the Big Day without telling us what’s going to happen upon arrival. This allows for a lot of confusion (what purpose do Katherine Waterston‘s doctor, Seth MacFarlane‘s energy drink magnate, and Sebastian Stan‘s NASCAR driver serve, if any?) to distract us from how little we know.

I don’t think it’s a spoiler to say the nuts and bolts of the job are revealed at the end, after the fact. It’s a sort of rewind to see everything we didn't see for a major bait and switch of epic manipulative proportions. I won’t lie and say that I didn’t feel a bit cheated upon discovering that we literally can’t figure out the truth for ourselves, but I’d never say the ride isn’t worth that rug pull, either. It is humor and convolution that I went to see and Soderbergh (and Blunt) deliver both with expert precision to ensure that we never have a moment to wonder about what’s missing. Cheesy, tongue-in-cheek injections also help the deflection game, bet it a Game of Thrones in-joke or meta commentary on Steven’s failed retirement.

So we laugh at the hick accents (or whatever British Islands voice MacFarlane is doing) and revel in the sass of stereotypical idiots getting frustrated at literal idiots and vice versa. The bit parts can steal the show at times (Dwight Yoakam‘s cowardly prison warden or Katie Holmes‘ white trash ex-wife with newfound riches) while others stick out like sore thumbs in a wholly wasteful manner (Stan’s Dayton White earns laughs with his high-production value introduction as a biological computer system who relies on quality “software” to stay fit, but it’s a lot of bluster for little value). It’s all a mixed bag structurally once you step back, but thankfully I can’t say I didn’t buy into the comedy of each disparate piece regardless.