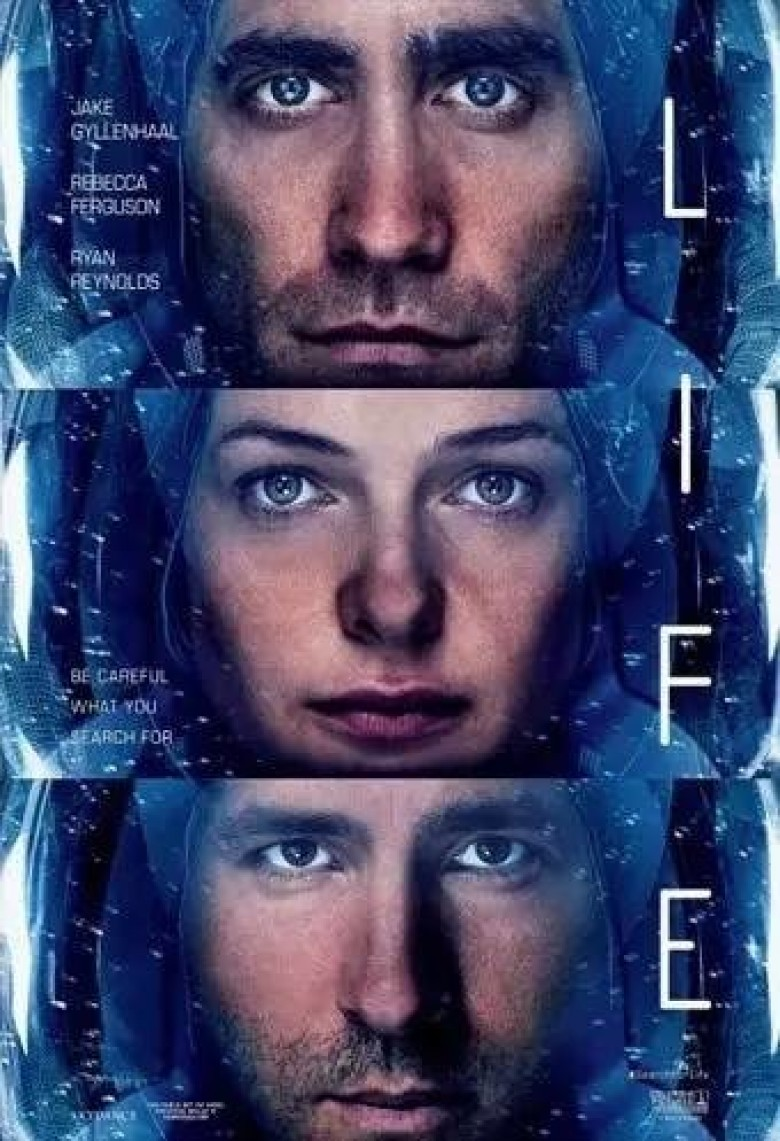 “Its curiosity outweighs its fear”

Calling Daniel Espinosa‘s Life an Alien retread is the easy thing to do. Both are tensely claustrophobic science fiction films with a violent extraterrestrial that’s loose and in search of the crew. But it’s also a very reductive comparison considering they are nothing alike beside genre conventions. The missions are different. The time period is different. And the creature’s motivation is as dissimilar as can be. Life also can’t help but stand apart on its own for one reason: it could actually happen tomorrow. We aren’t readying deep space probes to find forgotten spacecraft. Mankind isn’t tempting fate by forcing its control over the unknown (yet). What we are doing, however, is looking. We are visiting Mars and taking samples. We are experimenting with re-animating dormant microbial life.

Rhett Reese and Paul Wernick aren’t therefore creating a horrific scenario out of thin air with H.R. Giger aesthetics and sky’s-the-limit reach as far as imagination. They’re instead writing about the pitfalls of the next logical step. If we find a single-celled organism trapped in crystal that’s lived as recently as 450,000 years ago, we will attempt to bring it back. Call it science or hubris or both, it’s imperative to continue our study of biology and perhaps a key to solving disease on Earth. So, like the CDC’s Dr. Miranda North (Rebecca Ferguson), Reese and Wernick extrapolate the worst-case result of this and let it happen. North does this to ensure fail-safes aboard the International Space Station; the filmmakers do it to watch the aftermath of failure.

We therefore know these astronauts. They’re like those who inhabit the ISS every year. There’s North’s microbiologist in charge of everyone’s safety against the mysterious organism they hope to study. There’s David Jordan (Jake Gyllenhaal), the resident physician and ex-Marine who’s been in space for over a year; Rory Adams (Ryan Reynolds), the mission specialist with the engineering know-how to fix mechanical issues and operate the station’s robotic arm while spacewalking; Sho Murakami (Hiroyuki Sanada), the navigator/pilot awaiting the birth of his first child back home; Commander Ekaterina Golovkina (Olga Dihovichnaya), the woman in charge of the mission; and Hugh Derry (Ariyon Bakare), the scientist tasked with coaxing their Martian awake. They’re all qualified to be there and each possessed by a mixture of fascination and fear.

So what happens? The usual. But saying that doesn’t mean it’s boring. It’s instead as authentic as a science fiction film can be since everyone stays in character and works towards finding a balance between curiosity and caution. While we get some fun with Reynolds playing the group’s cocksure cowboy whose job it is to catch the shuttle holding their prospective specimen that’s hurtling through space off-course, the camaraderie between all is actually quite entertaining itself because they enjoy each other’s company. They’re watching each other’s backs and having a good time while operating in the awe-inspiring realm of space’s vacuum. They go about their business and keep their well-oiled machine rolling. And they remain on the opposite side of glass from Derry and the alien.

Espinosa and cinematographer Seamus McGarvey orchestrate a nice long-take at the beginning a la Gravity to set-up the environment and characters straight away. We follow the zero gravity travels of each as Adams gets in his suit and the others man their stations to position everything for his out-field catch. This sequence secures our proximity to Earth and the comfort of everyone on board with each other. There’s no animosity or ego, rank is upheld, and mistakes are not made. If Adams misses the catch they simply move on, so it’s more about anticipation than excitement. Only when Derry isolates a foreign cell and plays with atmosphere and catalyzing agent to re-energize it does the buzz of amazement and wonder enter. Space is old hat. Aliens are not.

The creature isn’t built to be scary, but real. This is a living entity with undifferentiated cells—meaning its entire make-up is one hundred percent eyes, muscle, brain, and nerves. Its rate of growth is exponential as Derry feeds it, their relationship harmonious and civil as though it were a pet until an accident changes the dynamic. Like humans have done for centuries, we react as soon as something surprising occurs. We play with fire despite not knowing whether our experiment can be burned. We’re cognizant to the reality that we’ve hurt it in a way to put its defenses up, but we’re too impatient to let its fear play out. So we poke, prod, and intimidate until it has but one choice: to fight back.

Our mistake is assuming we’re at the apex of the food chain. This may be true on Earth (and only because of our capacity to invent and use weapons), but not necessarily elsewhere. It only takes one mistake, no matter how well meaning, to turn the tables and move from offense to defense. Whatever you think you can do to stop this thing will just as likely make it stronger. To place logic and earthly properties onto it is to become trapped within a box devoid of escape. There’s no malicious intent or superiority on behalf of the alien (coined “Calvin”). It simply needs food, air, and water. Unfortunately, it has the means to acquire those things in ways that render us impotent to stop it.

I personally found “Calvin’s” construction ingenious. It doesn’t look like much until it increases in size, strength, and intelligence, but this is intentional. If the tiny creature still enclosed in Derry’s incubator had teeth and claws, he probably would have been instructed to kill it. Because it looks like an enlarged translucent amoeba that can separate and create amoeba-like arms with which to harmlessly grab hold of Derry’s finger, we falsely breathe easy. It’s small and innocuous enough to forget it’s completely muscle. Its soft and biomorphic enough to ignore that its ability to elongate and grow gives it the potential to wrap around and squeeze. Its lack of a discernable head belies the reality that it’s all brain and thus smart enough to figure a way out.

Its quest for freedom leads to a cat and mouse chase we’ve seen before. But familiar doesn’t mean ineffective. Motivations are revealed early and each character stays true to them. Their actions are believable and the overall severity in response to their situation is pertinent to mankind’s existence. It’s a suspenseful journey from one death to the next as they constantly underestimate its instincts and overestimate their pragmatism. One could say Life is also a metaphor for our earthly actions. To continue assuming we know what’s right by treating the “other” as enemy is to facilitate our own destruction. Searching to discover isn’t the same as searching for power. And believing we’re prepared for what that hubris delivers is nothing short of suicide. This film understands that cost.