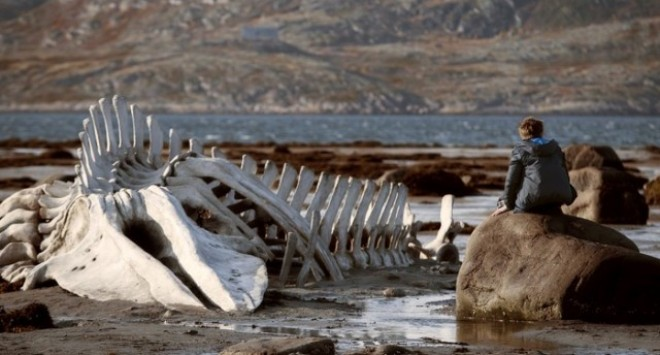 “These animals are not the whole town”

It doesn’t get much bleaker or more cynical than Andrey Zvyagintsev‘sЛевиафан [Leviathan]. He and cowriter Oleg Negin were inspired by many stories—”killdozer” rampage orchestrator Marvin Heemeyer, the Bible’s Job and King Ahab, and Heinrich von Kleist’s novella Michael Kohlhaas—all of which I know nothing about. Reading a little of Heemeyer’s tale, however, has me believing each dealt with the tragic circumstances befalling common man and the uphill climb necessary to overcome oppression. Whether met with economic, bureaucratic, or personal turmoil, there comes a breaking point of either accepting one’s fate or fighting against it. This is the fork almost every character inLeviathan stands before, some with the strength to walk forth and others the victim of a push. And God watching above proves the most selfish of all.

Centering on Kolya (Aleksey Serebryakov), a mechanic whose house and shop have been seized by the town with a paltry offer of compensation for his trouble, giving up isn’t an option. He built it with his own two hands, living there through the birth of his son Roman (Sergey Pokhodaev), the death of the boy’s mother, and a new marriage to Lilya (Elena Lyadova). Everyone in town knows Mayor Vadim Shelevyat (Roman Madyanov) is a less than savory character, so rumors that he’s taken the waterfront property to build a mansion of his own isn’t unfounded. After all, this is the Russian class dynamic drawn for us, complete with a portrait of Vladimir Putin staring down from Vadim’s wall. Russia is for the rich and powerful; the rest simply get to live there.

Luckily for Kolya his old friend is a high-powered attorney in Moscow (Vladimir Vdovichenkov‘s Dmitriy). Arriving the day before the judges’ ruling on Kolya’s request to either repeal the seizure or at least factor in the monetary strain losing his business will inflict, Dmitriy’s help isn’t quite what everyone had hoped. Resigned to the fact that the mayor’s hands are in too many political pockets to overturn anything, this stranger has hatched a new strategy more attuned to the government’s game. Armed with a file full of transgressions Vadim has made over the years with first-hand proof courtesy of a mutual “friend”, Dmitriy readies his buddy to try his hand at some blackmail after the fact. It’s a good plan too, but one that carries unforeseen consequences and dangerous assumptions based on underestimation.

What transpires is a descent down the rabbit hole of mankind’s hubris, greed, and fear—a lethal combination able to back men into a corner and unleash a wrath unlike any his victims could expect. Tenuous relationships are tested and broken; innocent excursions for fun soon escalate into emotional assaults thanks to a few extra glasses of Vodka; and threats met with enough force to make legitimate ultimatums seem like bluffs. There is a reason corrupt souls find their way to the top and it’s because those who aren’t cutthroat enough simply cannot make it that far. Some of us believe law and order with prevail: God’s Will tipping the scales on a higher plane for the little guy. God has favorites too, though, and money walks.

A grand metaphor for the state of Russia wherein everyone is a drunkard yet only a select few possess the clout to make good on inebriated promises. You assume it will be a David and Goliath yarn with all the trappings of its underdog champion prevailing against his oppressor, but it doesn’t take long to realize Zvyagintsev isn’t interested in fairy tales. His vision is one very much rooted in the unfairness of reality and the cold hard truth of corruption in this world. Leviathan becomes humanity’s hopes and dreams—things we can never catch no matter how close they appear on the horizon. Lust, rage, poverty, and depression always have a way to conquer. And just when you think the little guy has suffered enough, the dial is turned for more.

There’s a looming sense of futility, one that seeks to defeat Kolya, Lilya, and Dmitriy alike. To watch as they struggle while Vadim picks up a phone is a sight that’s universal no matter what part of the globe you hail. We’ve all experienced the gut-punch of crooks wearing suits juxtaposed against our own paycheck-to-paycheck existences. To earn the opportunity to turn the tables is a gift that cannot be squandered. Unfortunately, it is also a fight that will prove long and arduous with a slim chance of success. And when you’ve already endured so many losses that the battle itself becomes the victory, you find yourself unable to see past false allure. That’s when you lose sight of what matters: family, friends, and health. Without them the hill grows higher and the fall infinite.

With its gorgeous landscapes, weathered squalor, and opportunities for rebirth cast asunder for a hope the past might return, Leviathan sheds light on the beauty of impoverishment and evil of fantasy. It’s the type of ubiquitous existential crisis we project our lives upon as well as a specific look at a country turned inside out by rulers who care only for the perks of the job and nothing for those on the fringes keeping it alive. It’s about discovering the courage to stand tall for your ideals and the inevitable reality that idealism is dead. By the time you realize each step towards a better life is somehow digging your grave deeper and deeper, it’s too late. Authority, land, and God himself can be bought, but those deserving of them prove perpetually broke.