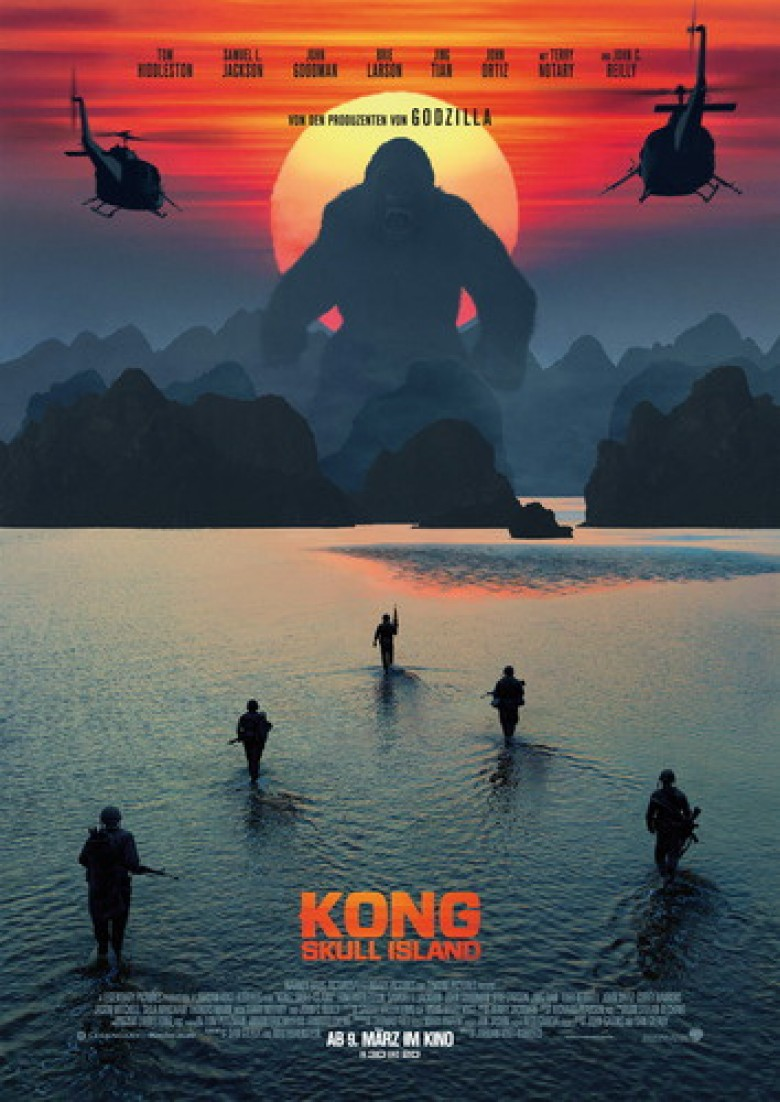 “Eating’s for the living”

It’s amazing how a film’s success can create a tidal wave, but that’s exactly what Gareth Edwards‘ Godzilla did in 2014. We’re talking critical acclaim, half a billion dollars at the box office, and a rejuvenated plea for monster flicks. Well the first two are fact, the third merely hope on behalf of Legendary Pictures. Because their investment isn’t just sequels, it’s about a “MonsterVerse” so important to them that they got Universal Pictures to give Kong: Skull Island‘s rights to Warner Bros. so a single studio rollout of this impromptu franchise is assured. Godzilla‘s profit margin solidified their confidence enough to increase Kong‘s budget $30 million by comparison too. We’ll soon find out if that type of money remains to allow for their planned meet-up in 2020.

My guess is that it will—barely. That’s not to disparage Godzilla (which I enjoyed a lot) or Kong (which delivers enough fun and action to secure healthy receipts). To me the time in-between is harmful. When Godzilla: King of the Monsters hits theaters we’ll be five years past the original and Godzilla vs. Kong tacks on another. That’s a tough sell on its own without the idea that both monsters are billed as protectors. Godzilla had to fight the MUTO and Kong is king to the Skull Island natives threatened by the vicious reptilian Skullcrawlers (as John C. Reilly‘s Hank Marlow labels them in the trailer). Will these two actually fight or will they simply team-up against another Legendary property (Mothra, Rodan, or Ghidorah) like Batman v Superman?

I know I’m getting ahead of myself, but these things are worth contemplating before sitting down to Kong because they explain the investment the studio is asking you to make. It’s no longer just about fun B-movie adventures that come and go in two hours. It’s now a prequel to a prequel to a mash-up that hasn’t been written. You can’t help but feel exhausted at the thought even if the prospect also provides the possibility for extensive character development and worthwhile storytelling thanks to the quiet, contemplative nature Godzilla utilized while setting the stage. If Kong took a similar approach to overcome the monster genre’s campy history, it could bolster a franchise worth the excitement of everyone involved from filmmaker to viewer. Sadly, this isn’t what occurred.

The trailer gives it away thanks to the aforementioned Hank Marlow, a World War II Lieutenant who’s been stranded on Skull Island for twenty-eight years before Monarch official Bill Randa (John Goodman) twists a senator friend’s arm to mount an expedition there at the tail-end of the Vietnam War. Reilly plays the character as a mix of sweetly loquacious kook and unhinged wild card removed from civilization for too long. It’s a brilliant combination and by far the film’s brightest spot, but it also encapsulates the looser tone manifested by a sense of humor Godzilla did not possess. This is director Jordan Vogt-Roberts‘ bread-and-butter (see the wonderful Kings of Summer) and lends a summer popcorn flick aesthetic to cut through the previous film’s emotionality, but at what cost?

The answer is franchise consistency at least, dramatic legitimacy to earn our commitment to future installments at worst. Don’t get me wrong: Skull Island is a mostly enjoyable romp consisting of a sprawling cast of actors—who each brings something special to the table—engaged in a futile war against a God. It’s a B-movie for the twenty-first century with scenes screaming artifice (aurora nightscapes, octopus snacks, and silhouetted dismemberments) in a glorious way. The 70s rock soundtrack gets us dancing in our seats while the bloody violence has us gleefully reveling in carnage born from man’s hubris. But at the end of the day nothing happens besides man being forced to acknowledge monsters exist and many people losing their lives. Other than Kong’s introduction, it’s just mindless entertainment.

And that’s fine if that’s the goal. Did John Gatins conceive it this way before Godzilla scribe Max Borenstein came abroad to find consistency Dan Gilroy and Derek Connolly then removed? Maybe. Monarch is mentioned and Kong is made the size of a mountain to be on par with previously introduced monsters, but that’s it. Nothing else connects to what we’ve already seen except for a post-credits stinger forcing the issue. The rest is Apocalypse Now homage (Tom Hiddleston‘s tracker is named Conrad like Heart of Darkness novelist Joseph Conrad) with disenchanted soldiers (Jason Mitchell‘s Mills, Thomas Mann‘s Slivko, and Eugene Cordero‘s Reles), company men (Shea Whigham‘s Cole and Toby Kebbell‘s Chapman), and their fearless Colonel Packard (Samuel L. Jackson) who cannot exist without an enemy to destroy.

These trained fighters chaperone Randa’s Landsat scientists (Corey Hawkins‘ Brooks, Jing Tian‘s Lin, and John Ortiz‘s Nieves) and a war photographer in Mason Weaver (Brie Larson). First contact separates them, factions are quickly created that either manifest self-loathing into a hatred of Kong or an understanding of his importance to this fragile ecosystem, and escape is a tiny window three days from crash landing. We don’t see any character development, Hiddleston’s Conrad jumps in front of Larson’s Weaver way too much, and she’s left to be afraid way too often without ever taking one photo in actual danger like a good war photographer should. Everyone is somewhat overwrought to mirror the franchise’s aspirations while Jackson and Reilly welcomingly embrace the cheesy theatrics of the film they’re in now.

So it can be highly enjoyable on the surface with stunning computer effects and a memorably atmospheric aesthetic. If you don’t bother trying to find reason, you can bask in clichéd tropes and watch over-the-top aggression get people killed. I get the fun of this, but it’s not enough for me. I need more than gorgeous visuals and art direction, more than one out-of-place eccentric cutting through their situation’s severity. Comparisons between Kong and Jurassic World are warranted (beyond their directors catapulting from small indie success to big budget excess). The difference is that the latter wasn’t an origin. It expanded from an existing mythology and utilized that to recreate a location. This one doesn’t. It throws us into its world and provides little in terms of explanation.

And for a race against time, the middle third can be a slow crawl thanks to constant cut backs from one faction to the other. This is where the exposition explains Kong’s history and purpose to the island’s people, provides cut scenes of other monsters, and exposes Jackson losing his grip. Purpose is delivered in a rush so the filmmakers can put their characters back into chaos and let the action speak for itself. Emotional bits like Reilly’s tragic past are glossed over for jokes (besides an unforgettable moment where he shows the mettle that helped him survive) and everyone either dies a cardboard cutout or squeaks through to learn a blunt lesson about the value of life. Expect thrills without any suspense and humor without substance.